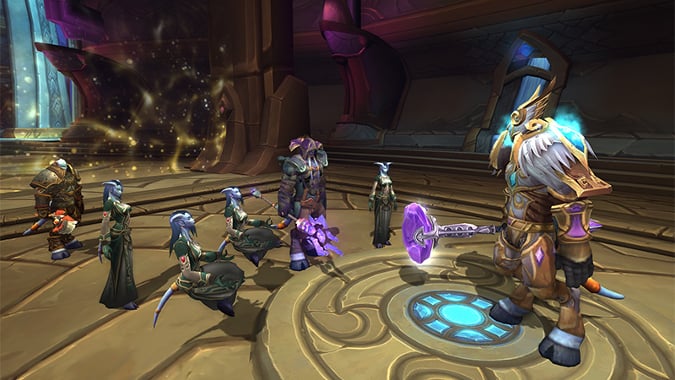 Welcome back to The Queue, our daily Q&A feature for all of Blizzard’s games! Have a question for the Blizzard Watch staff? Leave it in the comments and we may choose it for tomorrow’s edition!

Is it specifically indicated in game that Draenor is not just 35 years ago but also an alternate dimension?

I don’t think anywhere in-game states that whatsoever, no. It’s in the written material outside of the game and, if you know your timeline well enough, you can make some assumptions based on the cinematic. We’re invading shortly after Grommash turned down the demon blood — so we’re going to Draenor at roughly the same time the orcs would have come to Azeroth for the first time.

Will we see only a general theme (where it’s set, who the bad guys are, some story bits), or will we also see new UI features such as a new transmog system that “stores” looks once you’ve tried them on like in RIFT, or a new race or class, etc.,?

I’m going to assume the expansion reveal will mostly be a teaser trailer and the developers providing some broad strokes information. The teaser trailers for expansions are usually cinematics made using the in-game engine and have basic text listing the new features. We’ll probably learn the basic plot, see a few shots of the new zones, and learn about any of the major features that will be included. Everyone should be warned, though: these teaser trailers are usually indicative of early development and not the final product. I believe the dance studio was first mentioned in the Wrath teaser trailer and it never came to fruition.

I have a small question: where is our troll instance this expansion? Did they forget? Did they simply cut it out? I demand a scenario at the very least!

They’re giving us a break from trolls in Warlords of Draenor because the next expansion is 100% trolls. Gotta avoid that troll burnout, yknow?

Greetings Watchers! What are your thoughts on the current state of rep/apexis grinds and how they can be used to obtain perks or gear. I was estatic when WoD offered grinds which allowed the player to slay as many mobs as they desired until exalted or to rack up scores of apexis crystals to be used for gear upgrades i.e. Shat’ari Defense, Saberon, Tanaan, etc. without the gating of daily/weekly limitations on said rep or crystals.

As a player, I find this personally more rewarding than a chance at a random drop from a dungeon or raid queue, because I believe it demonstrates that Blizzard values the time I am spending in their game world. It frustrates me to run dungeons or raids over and over without reward…thanks to Tanaan’s baleful/apexis system I now have a full 695 set and have done no raiding at all. I feel like my time spent had purpose and was not left to the chance drop…I was in control. Anyway, do you think we can expect to see more of this grind-it-out style rep farming and gearing in the future…maybe even the return of the valor system?

Ultimately, I think Blizzard needs to offer content for multiple gameplay styles at max level. Rather than everything being apexis objectives, or everything being daily quests, or everything being grinding mobs, they need a mixture of all of the above. Personally, I quite enjoy just grinding out mobs. I don’t mind rep grinds where I need to kill thousands upon thousands of mobs — I don’t mind grinding them out for currency, either. But I know there are people who hate that and much prefer daily quests. Given the sheer size and varying preferences of their playerbase, I think offering a little of everything is what they should be doing. I’d hate to see those apexis-style objective areas go away — I’d also hate to see them be 100% of max level content.

I also very much appreciate zones like the Timeless Isle and Tanaan Jungle because they give me gearing avenues that don’t involve raiding, like you said. As I’ve gotten older, I’ve been less and less inclined to raid — both due to time constraints and reasons pertaining to my health. There’s something about the overwhelming visual stimuli in raids that gives me actual migraines — debilitating migraines — and I was willing to put up with them for the sake of progress as a teenager, but I can’t do that anymore. I appreciate every avenue of gearing they provide outside of raiding; I miss sustainable dungeons and valor points for that reason. I hope to see them come back. I’ve been saying this for a few expansions now, but I really do hope they put more focus into creating dungeons throughout an expansion. The dungeons in Warlords faded more quickly than any expansion before — and that sucks.