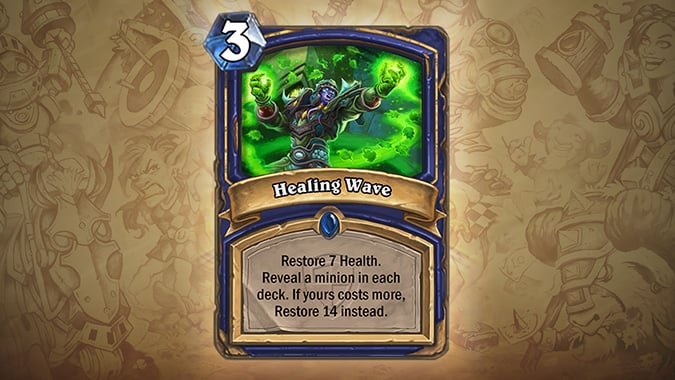 A new Hearthstone Shaman class card was revealed earlier today. Healing Wave is one of the new spells utilizing the Grand Tournament exclusive joust mechanic. Coming in at a measly 3 mana cost, this spell will restore (at minimum) 7 health. If you win that joust, the heal doubles to 14 instead.

Shaman decks are commonly viewed as one of the weakest in Hearthstone. I can see Healing Wave being included to help prolong matches and allowing Shaman players to stabilize with the goal of reaching the late game where they can start dropping their bigger minions. In fact, this healing spell should provide a fighting chance against Face Hunter and Zoo decks. I’m on the fence on whether or not I should add one or two copies of this card to my existing deck. I’m currently leaning towards just one. Anyway, with any luck, we’ll start seeing more and more competitive Shaman decks.

Blizzard Watch is made possible by people like you.
Please consider supporting our Patreon!
Filed Under: Grand Tournament, Healing Wave, Hearthstone
Advertisement