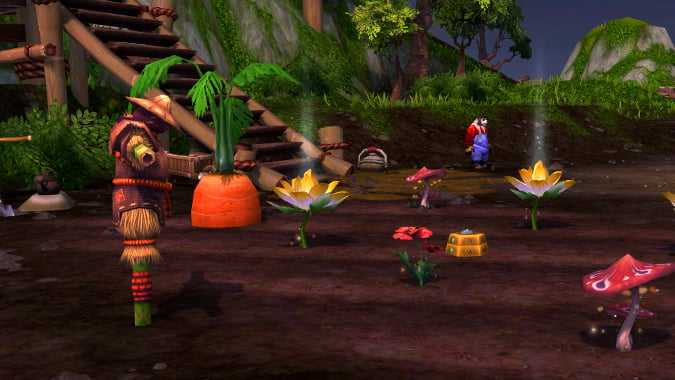 Welcome back to The Queue, our daily Q&A feature for all of Blizzard’s games! Have a question for the Blizzard Watch staff? Leave it in the comments and we may choose it for tomorrow’s edition!

For those of you who still use your farm, does it still pay back after all the work you did to upgrade it?

The farm in  Pandaria, I assume? It pays off for people with specific professions and goals in mind. If you’re planting Mists of Pandaria food and vegetables, you’re unlikely to benefit. If you have Inscription and like to play the glyph market, your farm essentially provides free herbs for the Mists of Pandaria tier inks — meaning you don’t need to trade down your Warlords of Draenor inks for that particular set. The herbs themselves still sell for a so-so price on the auction house, as does the ore.

I don’t go back to my farm anymore, but I feel I got my value out of the farm in Mists. I’m not upset I invested time into it. The time I invested was worthwhile at that time.

Do we know exactly what Vol’jin direction for the Horde is and what his directions on encountering the Alliance?

Unfortunately, I don’t think Blizzard has done anything with Vol’jin since he became warchief. I could be wrong about that — I haven’t played all of Warlords of Draenor‘s Horde content — but I’m pretty sure his only appearance is his brief trip to your garrison at the start of patch 6.2’s content. Maybe he’ll have a role in Legion. After all, the Horde and the Alliance are at each other’s throats again in Legion! Oh, boy!

Could we see the Scythe of Elune make an appearance in Legion?

Maybe? The Scythe of Elune is one of those story hooks I always found a little odd. It’s a story they kept referencing, hinting at, teasing, revisiting — then it would disappear. Most recently, the scythe is assumed to be in Darnassus somewhere, because it’s part of the worgen starting experience. It isn’t lost anymore. However, there was a lot of hype behind the artifact, it was often suggested this item was ancient, powerful, terrible… and when it finally made an in-game appearance, it didn’t do anything particularly interesting. If it did anything at all.

I’m an old-school player. I was intrigued about the Scythe of Elune for a long, long time. It was a lesser version of the Ashbringer madness. Like Ashbringer, when it finally showed up in-game, it wasn’t even half as cool as what players imagined. I don’t really care if it ever appears again, personally.

Does anyone know when the Grand Tourney preorder ends? I’m worried about not getting a chance to get it if it goes away before able to buy it. Have they said if it’s going away or when the Tournament opens?

The Grand Tournament could launch as early as this upcoming Tuesday — two days from now. A nebulous “August” is the only release date given, so it’s either this week or next week. Given Tuesday has extended Battle.net downtime and all of the new cards have been revealed, however, strongly suggests Tuesday. If you’re going to pre-order, I recommend doing so as soon as you’re able. The pre-order deal will almost certainly go away when the expansion launches, as it won’t be a pre-order anymore.

I’ve bought every single transmog item you can buy with the Iron Horde Scraps, and the damn things keep dropping. I’ve got more than I’ll ever use. Is there any chance they’ll add something new to buy with them?

Probably not. Patch 6.2.2 doesn’t have anything new for them and it’s likely that’s our last patch until the Legion pre-patch. If you don’t want to simply throw them away, I suggest buying duplicates of the transmog items and simply vendoring them for gold — or pump them into the level 3 Bunker/War Mill daily and vendor the follower gear items instead. Those actually sell for a decent chunk of gold, so it isn’t a total waste.

What location in Draenor do you think that they should have utilized more?  And let’s not dwell on the whole Faralohn debacle.  For example:  I honestly thought that Shattrath could have been used as a raid.  We don’t get to go actually inside the city and it would have been a good location for an attack by Gul’dan’s forces.  What other areas are real missed opportunites?

Shattrath is my answer. Shattrath, Shattrath, Shattrath. It’s bonkers that Shattrath got shoved off to the side and we get raids in crap-heap places like Highmaul. In the lead-up to Warlords of Draenor, I felt Shattrath and Karabor were the two locations we’d see to tell the Draenei side of the Warlords story, but neither one was utilized at all. Yes, I wanted to see Farahlon, but the lack of meaningful content in regards to Shattrath and Karabor surprised me more. I expected them to be baseline locations in the expansion.