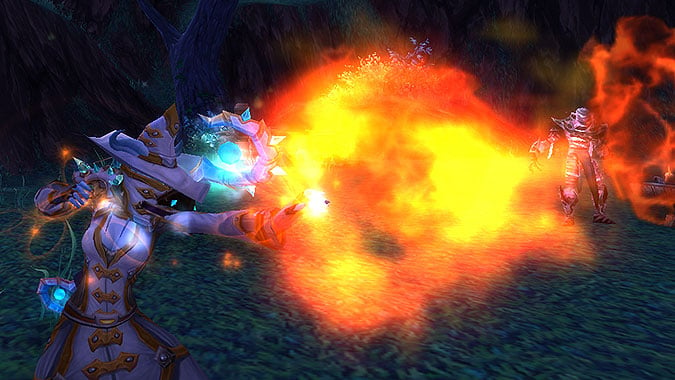 There comes a time in every Mage’s life when they want to improve their game. Although we’ve discussed a few changes you can make to increase your DPS, sometimes you need more or different information from the game to make the best decisions in the heat of the moment. The stock UI isn’t always the best at this, although it’s improved over the years. That’s where addons come in!

The right addons can help you keep relevant information front and center, or allow you to customize them for specific buffs, debuffs and other information you might want. We’ll be considering some of the most well-known and consistently helpful Mage addons.

Deadly Boss Mods
The majority of raiders use a boss mod to help them keep track of bosses’ many abilities and timers. DBM specifically will give you timers for a boss’s abilities, warnings and notifications when you need to move out of or into something, and generally be your raiding companion. Having one is essential and DBM is frequently updated and highly customizable. The topic of which boss addon is best is hotly debated. If you don’t like DBM for any particular reason, there are other high quality boss addons available.

Omen Threat Meter
Not as essential as it once was given changes to tank threat, but can still be useful to ensure you aren’t doing any tanking. It can be configured to play an ominous warning sound when your threat is approaching critical levels. 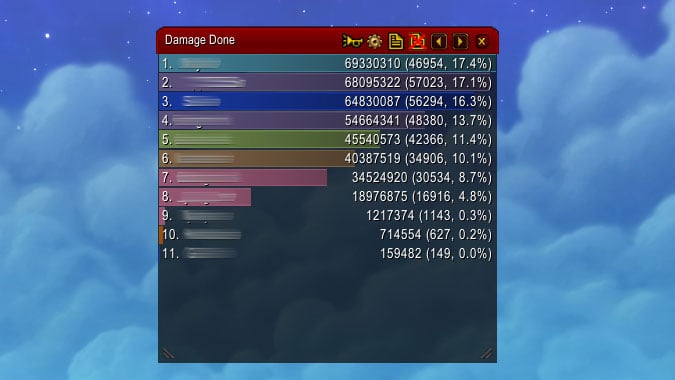 Recount
Whether you love them or hate them, damage meters are a reality of modern play. Especially as DPS players we should have a way of measuring our damage after combat. It includes graphs and also a quick damage breakdown by spell if you mouseover your own damage bar. Make sure to set it to “damage done,” otherwise you’ll get inaccurate ideas of damage based on burst damage per second.

The alternative to Recount listed below (Skada) is actually both a threat and damage meter together, so if you end up preferring it you could combine here rather than having two separate addons.

Vuhdo
Unit frame addons are often used by healers but can be extremely useful for Mages as well. They are configurable to give you an overview of your raid or group including any important debuffs. You can easily set up Vuhdo to also show you if a member of your raid is missing Arcane Brilliance as well as an easy mouse click to cast Remove Curse.

I’m firmly in the Vuhdo camp when it comes to the Grid versus Vuhdo wars, but some people are staunch Grid supporters and that could work for you as well if you prefer. If you only care about curse removal, Decursive is a simpler addon specialized for that functionality.

Tidy Plates
This addon allows you to customize the visual appearance of enemy nameplates for greater visibility or ease of information. This includes settings that will show if you have threat on an enemy and it’s time to cast Invisibility. Please note that as of this writing, Tidy Plates has not been updated for patch 6.2.2.

Bartender4
Customizable action bars can be essential for your gameplay by allowing you to make sure that all of your most important abilities are as accessible as possible. Bartender allows you to make action bars in any configuration of rows and columns. You can use this for example, if you use a mouse with many side buttons, to create an action bar that mirrors their location as in the image above. The bars can also be moved anywhere on the screen, adjusted in size and opacity. As an added benefit, there’s a key binding mode so that setting up your keybinds is as easy as clicking the desired key over whichever button you’d like it bound to.

Quartz
Allows you to replace the default castbar with one that can be customized to your liking to change the size, text, icon positioning and colors. It includes a global cooldown notification for ease of use as well as a built-in latency display to give you a better idea of when you can start casting your next spell.

MageManaBar
Specifically useful for Arcane Mages managing their burn/conserve phases, MageManaBar offers adjustable thresholds and a “burn phase countdown” timer that can help Mages new to Arcane to plan cooldowns and utilize their mana effectively before using Evocate. The addon is slightly out of date but still functional currently.

Weak Auras 2
By far the most popular response when I asked Mages which addons they consider essential, and with good reason. WA allows you to create your own highly customizable notifiers for so many things. If you have a debuff, if you’re missing a buff (e.g. Rune of Power), if one of your trinkets has procced, if you’d like to keep track of your Incanter’s Flow stacks, Weak Auras 2 can do all of that and more. There is a bit of a learning curve, but the other great advantage is that once an aura has been created, it can be exported easily and shared with other Mages. So if you want an aura for a specific thing, you can often search and find someone who has created one and shared it. Then you can make changes to the aura if you want it to look or behave a different way.

The image below is an example of a few Weak Auras. The rune circles in the middle are textures that fade downward to represent trinket buffs. The red number to the right mirrors the number of Incanter’s Flow stacks that are present. 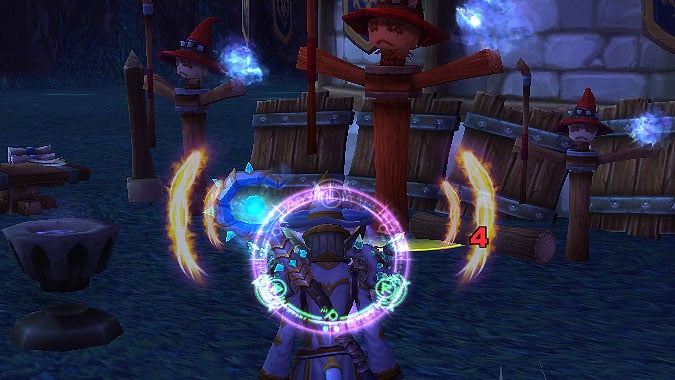 Mage Nuggets
This addon is a sort of “kitchen sink” utility addon for Mages (although it has functionality for some other caster classes as well). It includes notifications for major spell procs and stacks such as Pyroblast! as well as timer bars for cooldowns and DoT tracking. It will show you how many targets are affected by your Living Bomb, for example, or when Mirror Image is next available to cast. The reason I find it indispensable is because of its other small quality of life features. It gives you a Polymorph timer that also plays a sound when your Polymorph breaks. It provides an easy to see window to let you know when a buff is available to Spellsteal. If configured to do so, it will also whisper a party member when you cast Slow Fall on them. I’ve known a Mage to send this whisper without actually casting Slow Fall, but it’s up to you if you use this power for good or evil.

Spellstealer
A simple and straightforward Spellsteal monitor that gives you a list of spellstealable buffs on your target as well as options for announcing in party or raid when you’ve successfully stolen a spell. A useful supplementary addon if you aren’t using any other addon that contains this functionality (e.g. Mage Nuggets).

PortalMaster
Another direct and simple addon, this allows you to specify a portal or teleport spell by typing the name rather than squinting at the flyout menu and hoping you don’t accidentally click the wrong Dalaran teleport again and then tab out after casting it only to hear the sound of yourself dying, not that I’ve ever done that. 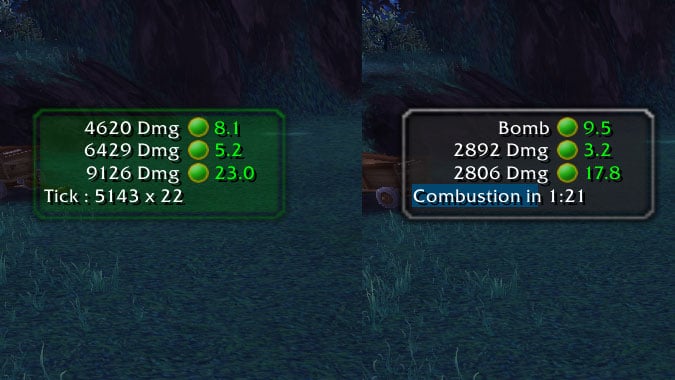 CombustionHelper (Fire Only)
A neat little package with one specific function: to keep track of all the DoTs that contribute to your Combustion and display them at a glance so you can judge the optimal time to cast Combustion. The above image shows CombustionHelper with default settings, alerting you that you could cast Combustion by lighting up green. The right side of the image shows the addon after Combustion has been cast, including a timer telling you when you can cast it again. It also has some Fire Mage functionality outside of Combustion itself in the form of optional Pyroblast! notifications and spell timers. You can also use it to enter a customized message to announce when your Cauterize has been triggered, and a different message if Ice Block is available.

Keep in mind there is no definitive list of addons that everyone should have because playstyles and personal preference vary widely. This is by no means a comprehensive list but it does feature many popular and useful addons. If there’s an addon that you find invaluable to your play, please mention it in the comments!

Blizzard Watch is made possible by people like you.
Please consider supporting our Patreon!
Filed Under: Addons, Mage Addons, Raiding, World Of Warcraft UI
Advertisement