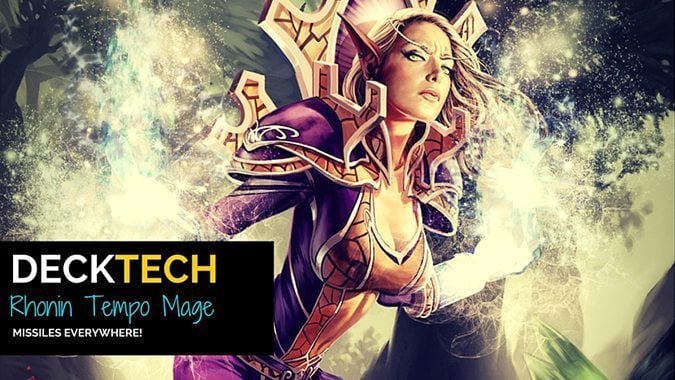 Thankfully, there are no Murlocs this week to plague us. It’s been almost two weeks now since the release of Grand Tournament, and we’re starting to see the ladder stabilize a little bit.

This week, we’re going to expand into Mage decks. Now Mages arguably received one of the better legendary cards in the set with Rhonin. His Deathrattle yields you 3 Arcane Missiles (which translates to 9 damage for 3 mana). At that stage of the game, those Missiles can help clean up the board or be used directly against your opponent for the finishing blow. In addition to Rhonin, a new secret card was introduced that adds even more value for players: Effigy.

The old version of Tempo Mage had Flamewakers on the board that would constantly chip out damage for from the spells you played. The new version still has Flamewakers but adds an interesting twist with Effigy. Your main route to victory is to go aggressively against your opponent and run them over while ignoring threats that appear in the mid-game. Alternatively, your spells and Hero Power will help you contain opposing minions to the point where they’ll eventually run out of threats to play against you. In other words, you can adapt to your opponent’s deck by swiftly defeating them or playing a slower, control game and methodically removing threats.

Throw away any secrets you start out with. Match-specific mulligans can be found at the bottom, but as a general rule, keep your Mana Wyrms, Mirror Image, Flamecannon, and Frostbolts. Unstable Portal can be kept but only if you have a 1 or 2 mana cost minion you can play. Flamewaker can be held if you have The Coin and have early game minions to support it.

One of the best starts you can have on the draw is to coin out a Sorcerer’s Apprentice followed by Mirror Images (made free by said Apprentice). Short of using spells, your opponent will have to run through your images before disposing of the Apprentice.

Aside from that, play your Mana Wyrms. Don’t fall into the trap of holding them and waiting to buff up their attack damage while you cast spells. The current meta game sees the ladder being overwhelmingly hounded by both Paladins, Priests, and Warriors. Your Unstable Portals have a solid chance of netting to a decent minion. 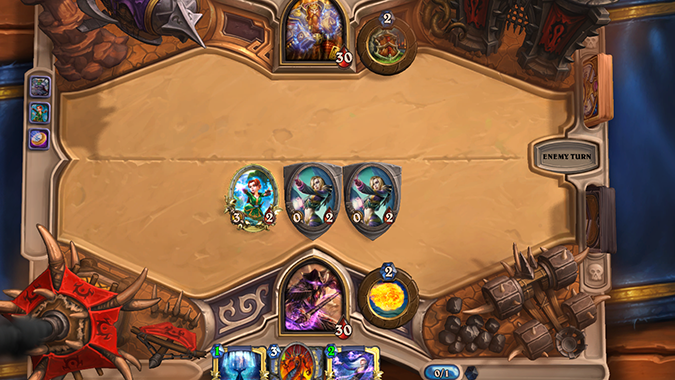 Keep up the pressure here. The beauty of tempo mage is on the ability of the deck to apply sustained, efficient pressure. Ideally, your secrets will be played out from Mad Scientist. You don’t want Effigy to start hitting the board until mid or late game when your bigger minions are in play to provide some insurance. Even if Dr. Boom goes down, Effigy might be able to swing you something like Baron Geddon that helps keep the board clear.

Although maybe the Baron isn’t the best case outcome for you due to his clearing nature.

Welcome to the late game! If Dr. Boom isn’t enough to, there’s always Rhonin. Don’t worry, even if Rhonin gets removed, you still have some sweet Arcane Missiles left over to help fuel Archmage Antonidas and his Fireball generating ways. Toshley there can create some quick spare part cards for extra triggering damage from Flamewaker. You have one copy of Flamestrike in the deck in the event the board needs to be reset and cleared. Use it sparingly.

That is a huge list of alternative cards here but that showcases the flexibility of Tempo Mage decks.

Although the main deck comes with single copies of Mirror Image and Flamecannon, you can sub out an Arcane Intellect and a Sorcerer’s Apprentice for the two instead. Do this if you find yourself needing additional removal options. In fact, if you find Rhonin’s Arcane Missiles aren’t enough, you can add even more to your deck arsenal to handle those pesky early game minons.

Against other minion centric decks, you can remove the Counterspell secret and add in a copy of Mirror Entity. Playing it on key turns (prior to turn 7 to try to snatch an opposing Dr. Boom for example) can help you steer the game in your favor. Kezan Mystic is another hard encounter to help steal opposing Paladin, Mage, and Hunter secrets. Kel’Thuzad and Sylvanas are other cards that can help tie in with the Effigy theme that you have going on here with their death interactions.

Nexus-Champion Saraad is one of the newer cards from The Grand Tournament that I have yet to properly test with this lineup. In theory, it plays well with the theme of the deck due to his ability to shell out spells for you when you Hero Power which in turn fuels your Flamewaker. Arcane Blast is another option that I haven’t had a chance to test with (but being able to pop off 4 damage with an Azure Drake in play is pretty awesome).

*The only reason I added a Blood Knight is to specifically counter Divine Shields that are propping up again from the revamped Paladin secret decks. I suspect that trend will die down soon enough.

Druid: You’ll start seeing Darnassus Aspirants entering play in the early game. It’s vital that they be removed. Either run your minions into them or hold a Frostbolt back in reserve. If they manage to stick on the board for even one turn, your opponent will be able to accelerate and out threat you with minion drops. Keep advancing your board and using your spells (like Fireball) to remove their minions (like Azure Drake or Druid of the Claw).

Hunter: Look for your Flamecannons and Mirror Image. Mana Wyrms and Frostbolts will help here too. The goal is to survive the early rush from Face Hunter. Your Flamewaker will come in handy especially if you can protect it. Midrange Hunter decks are easier to stomach here but you have to be able to confirm and identify it as soon as you can (Hint: If you see a Webspinner, it’s almost always a Midrange Hunter).

Mage: There are so many different mage types. If you’re sure your opponent is running Freeze Mage (with the Ice Blocks and Ice Barrier), start pushing for lethal early. Your game plan is going to depend on your card draws. An aggressive opening with early minions means you can start applying pressure early but a slower hand means you have to change gears and work on slowly suffocating your opponent. Use your Hero Power and trade intelligently.

Paladin: Flamewaker should have a field day against all the Silver Hand Recruits and potential Murlocs that are summoned from the Murloc Knight. Secrets Paladin continues to have an enormous impact around turn 6 so plan for that accordingly. Remember that the secrets you play will buff their Secretkeepers. With so much damage potential coming out from your spells and their synergy with Flamewaker, you should be able to take this matchup.

Priest: Dragon Priest has made quite a resurgence on the ladder with Twilight Guardian and Wyrmrest Agent. Keep your cheap removal spells like Flamecannon and Frostbolt (against the Northshire Cleric). Holy Champion can spiral out of control so I’d consider directing a Fireball to that as it’ll be out of range of your Flamestrike. Cabal Shadow Priest can steal some of your key minions. Do not let their Northshire Clerics fetch them cards.

Rogue: Lean more towards removing their minions with your spells. If you can continue to control the board enough, their Tinker’s Sharpsword Oil won’t have much in the way of targets. Send your minions directly into your opponent for added pressure (and, y’know, to win the game). Hold onto Mirror Image here.

Shaman: The new Totem Shaman decks are starting to appear more and more in popularity but the amount of damage and removal packed in Tempo Mage should cut through most of the totems. They’re more like toothpicks anyway. Fire Elemental comes out on turn 6 so try to ensure your Flamewaker stays at full health.

Warlock: Hand Lock is easier to deal with. They have to respect your ability to output burst damage from your spells. If their health stays too high, they won’t be able to play their Molten Giants. If their health drops too low, they’ll be well within lethal range of your Fireballs and other spells. Zoo Warlocks can give you a hard time if you don’t manage to have your own minions to play early on to respond to their threats. Flamestrike is one of the few outs you have in the deck to reset the board.

Warrior: Like playing against Rogue decks, keep Mirror Images. It’ll waste weapon durability charges if they’re forced to attack into them. I didn’t add Harrison Jones to the alternate cards list, but if you find yourself repeatedly running into Warrior decks, Harrison is a good tech card to consider.

Good luck on the ladder! Hope you enjoyed this deck as much as I did. Let me know how your results are.