The Queue: I’m back 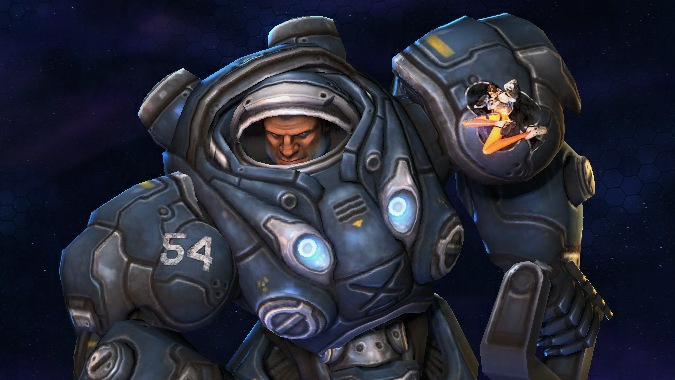 I’ve returned from my vacation. I definitely did not have to spend my first few hours on the job going through notes from people who were angry Liz, Anne, and Rossi were talking about Dragon Age for the last week. Nope, totally did not have to do that. I’m not stressed. My blood pressure is fine. I’m fine. Everything is fine.

Will we see Overwatch heroes in HotS and will one appear before HotS even finishes beta? And which hero should it be?

Tracer’s mascot status makes her an obvious choice for Heroes of the Storm, I think. Heroes incorporates some of the most iconic characters before it moves into the more obscure options and, right now, the iconic characters from Overwatch are Tracer, Reaper, Widowmaker, and maybe Winston. Fun fact: Tracer and Widowmaker are already in Heroes of the Storm. Not as playable characters, but as decals on Tychus’s armor. You can see Tracer in today’s header image.

Is there an item which will teleport me to somewhere in Pandaria, like the cloak for Stormwind or ring for Dalaran?

Gold challenge modes in Mists of Pandaria had, I believe, and item that teleported you directly to dungeons. Beyond that, I can’t think of anything else unless you’re an Engineer. Engineers get an item every expansion that teleports them to that continent — usually with potentially disastrous effects, such as being dropped from the sky or lit on fire.

Are you guys planning to do any general Starcraft columns from time to time? Just like the time to time Diablo and Hearthstone columns? If not, are you guys actively searching for a suitable writer for Starcraft stuff? I don’t play much Blizzard games and I still read those columns anyway, would be interesting.

We’re not currently looking to pick someone up for StarCraft. At some point in the future (which is not right now), I’d like to find someone dedicated to esports, which would include StarCraft. In purely single-player games, especially one that’s about to release its concluding act, there isn’t much longevity in having someone dedicated to talking about it. The lasting interest in StarCraft is in the multiplayer aspects. And even then, the people we have on-staff who have an interest in StarCraft have reached something of a consensus that the scene isn’t particularly interesting these days. For a long time, StarCraft was the only viable competitive game out there that wasn’t an FPS or fighting game. With the rise of MOBAs, that just isn’t true. From where we sit, it even seems to us Blizzard isn’t promoting StarCraft the way they promo their other games — including Heroes of the Storm tournaments, which often don’t even have the same cash value behind it.

Given we don’t cover StarCraft heavily, it’s no surprise we aren’t where players look for StarCraft news. That said, when we do post about StarCraft, the views are essentially nonexistent. You could explain that as, since we don’t cover StarCraft much, we’re creating a situation where people won’t look at the few StarCraft things we post. That wouldn’t be unreasonable, and to an extent, I agree. However, we’re simply not seeing huge StarCraft hype anywhere but the places that’ve housed the diehard StarCraft fans for the last decade and I don’t expect we could change that. We’re not opposed to covering StarCraft. We just have far better things to spend our budget on right now.

I’m going to answer this one entirely because it’s something that has always interested me in the fantasy genre. Or sci-fi, depending on the type of sci-fi. For example, the Asari in Mass Effect are much longer-lived than humans, and even moreso than Salarians, who might only live for 30 years. (No, I’m not going on a Mass Effect tear here. Don’t worry.)

For me, I think it comes down to maturity, both physically and emotionally. A 5,000 year old Draenei dating a 20 year old Human is not the same as a 20 year old Human dating a human child. That 20 year old Human has reached physical maturity and, in our culture, is expected to be in possession of a mind mature enough to take care of itself in society. Admittedly, I’m almost 30 and I couldn’t imagine dating a 20 year old, because I personally don’t think 20 year olds have quite enough independent life experience yet, but I also don’t think it would be morally wrong for me to do so. Our relationship might be weird on occasion, but if there were any problems with it, that would be for us to deal with between ourselves. Mid-20s would be more reasonable. That’s not really the point here, though.

In the fantasy fiction I’ve written, I have elves that live roughly a thousand years. They reach physical maturity at the same rate as humans. Whether or not they’re willing to enter a relationship with relatively short-lived humans is up to the individual. An elf of 200 years or so might still be willing to enter into a relationship with a human. An elf even older than that might reach the point where they feel their life experience is so completely different than a human, they couldn’t have a happy relationship. However, there could be couples who don’t feel that’s an issue — or if it is an issue, they work through it together, like any couple might work through disagreements or each of them possessing different viewpoints. These are romantic relationships. Every couple is different. Some things are make/break to one person, but completely not an issue to someone else. As long as both parts have reached their species’ physical and cultural maturity, capable of making their own decisions and giving personal and legal consent, it isn’t a problem.

In your example, if this relationship went beyond dating, the Human would certainly die of old age long before the Draenei would. Mass Effect‘s Asari had a specific outlook on that: you cherish the time you have. You don’t avoid these relationships because you’re going to lose the person in the relative blink of an eye. You love them for as long as you can and you’ll still remember them afterwards.

Also: Since so many of you were talking about the Wrathion/Anduin fan canon in yesterday’s comments… I’m so incredibly uninterested in saying whether or not I support such a ship, but if it were canon, I wouldn’t find it creepy. Wrathion (at least in his humanoid form) is mature enough to be running his personal ring of assassins, manipulate politics and world events, eat the hearts of his enemies to absorb their power, etc. He does not look like a child. Even if he’s only three years old, he has the mind and body of a young adult. It isn’t creepy to me. Now, if Anduin were also a dragon, and they only had dragon forms, and Anduin was a fully grown dragon and Wrathion was still a whelp, that would be a different story.