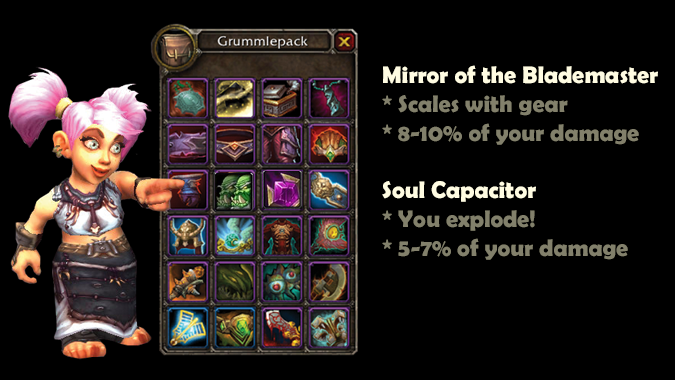 Let’s talk trinkets. We all know they can have a pretty big impact on your performance, but I wanted to know how much of an impact as well as how to maximize the procs. Every little bit matters when you’re trying to rank, or just trying to do your best! So I dug through a lot of data and talked to a few people in search of interesting results. I’ll be giving you all of the buff names, spell names and tools to evaluate trinket performance for yourself as well.

I’m breaking this up into a few different articles since these Hellfire Citadel trinkets had a lot more backstory and information than I anticipated. I don’t want to make you read a novel, so I’m starting with the Soul Capacitor and Mirror of the Blademaster. Of the top ranked players, at least 90% of the them had one of these trinkets equipped for relevant boss fights. 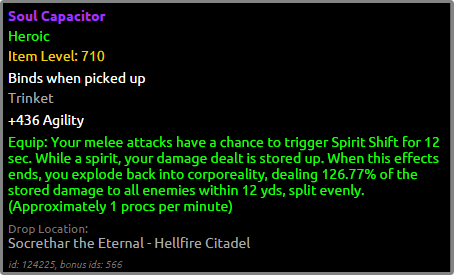 A fan favorite. It’s strong for both single and multi-target fights. However, this trinket likes to masquerade as better than it is. I say that because of the way it functions and gets logged. Here’s how the trinket works: 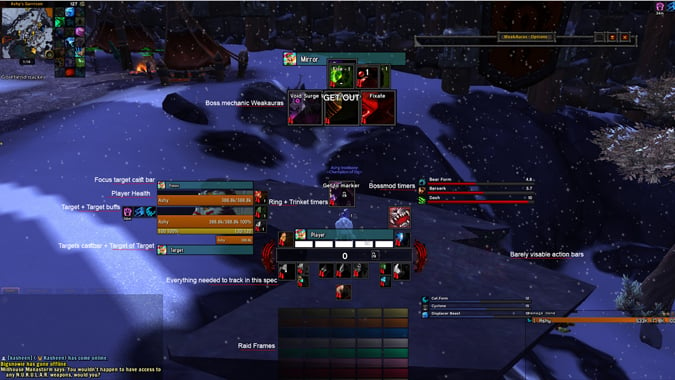 Your positioning matters, since you explode after 10 seconds, you either want to be near the boss, adds with a lot of life, or a whole lot of little adds. Since this trinket has a random proc, you have to make the most use of your time, and position yourself well at the end of it.

Hinalover, my go-to Monk theorycrafter, shared some of his favorite uses for this trinket. Of course, he really likes this trinket on fights where the mobs rarely move away from you, making the trinket incredibly easy to use. Then there are fights where a bunch of low-health mobs appear at once, like the hands on Kormrok. If it procs during the hands phase, you can store up a ridiculous amount of AOE damage, then you funnel it all onto the boss after the hands die.  However, if you need to kill low health adds quickly, like during the stomach phase on Gorefiend, it can be bad. Not only are the adds spread apart, but aren’t storing up as much damage and can usually only explode it on one low-health mob.

Update: Thanks to tamillerkt, one of the commenters on this article, we have a super pro tip for this trinket. “If the trinket procs at a bad time, (say, for example, 5 seconds before Reaver is about to Blitz to the other side of the room), you can use a macro “/cancelaura Spirit Shift” to release your stored up damage.” You won’t get the full benefit from the stored damage, because you are cutting it short. But it is definitely better than losing it all!

I also talked with Ashy, a Feral Druid who got 13.3% of his damage (wcl) from the Mythic Soul Capacitor on Zakuun (remember to divide by 4, if you look at the log). He’s been able to get his first Soul Capacitor explosion to deal 1.8 million damage. On explosions in the middle of the fight, sometimes you have to move out of something in order to not wipe the raid, which means your explosion might not hit your intended target (or any target).

And of course, having a smart UI helps you know when a Trinket procs, what abilities are off cooldown, and so on. Ashy explains that If you have to look all over to your screen to see what’s ready, you’re not being as efficient as possible. He shared a screenshot of his UI, claiming it might not be the best, but it’s a very nice start to improving your DPS. 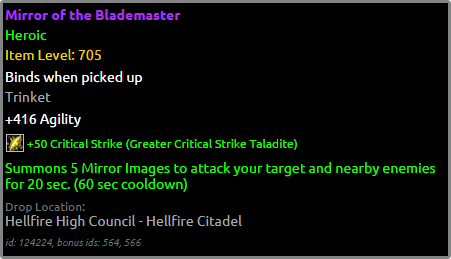 Mirror of the Blademaster

If you’re one of the classes who can use this trinket, go out and farm Normal Hellfire High Council.

It doesn’t matter if you have the Normal or Mythic version equipped, the proc deals the same damage. And each version of the trinket spawns the same number of Mirror Images: 4. The Mirror Images also scale with your stats: they scale with your stats, like Attack Power and Haste (so they hit harder and faster), but they can’t crit or multistrike themselves (though they can trigger off them). The proc scales with you, not the item level of the trinket.

Update: A few people asked in the comments if this trinket scales with Heroism. It appears that it does. I don’t have Blizzard’s confirmation, but I do have it from Fierydemise, a well-respected theorycrafter who’s done a lot of tests. This also uncovered another piece of interesting information: since 2 of the Mirror Images spawn in front of the mob, they can be parried.

And just for fun, I looked through the top ranked players who had average Heroic and Mythic item levels, to see what version of the trinket they had equipped. 75% of them had the lower difficulty version, and I even found some top ranked Mythic-geared players with the 690 version (see example).

Of course, the better versions are loaded up with more Agility.

I spent some time chatting with Esoth, a Hunter Theorycrafter, about this trinket. Since the Mirror Images spawn at your target’s location for 20 seconds, positioning is important. So are good tanks that won’t move mobs around without a good reason! That being said, the proc is on-use, letting you maximize the timing and placement. Esoth’s advice is the really know each fight, so you can use the trinket during low movement phases. But also keep in mind that the trinket has a short, 1-minute cooldown, so you should definitely be using it quite often.

Mastering timing and positioning of this proc can increase your damage by 8-18%, depending on class and fight.

The Mirror of the Blademaster is recommended for Challenge Modes by a whole lot of theorycrafters. The reason: being able to do burst OE on demand is one of the most important factors. You can control when it procs and it has a short 1-minute cooldown. And while the Mirror Images don’t move, the rooms are so small it’s not usually a problem.

Blizzard Watch is made possible by people like you.
Please consider supporting our Patreon!
Filed Under: Climbing The Ranks, Hellfire Citadel Trinkets
Advertisement