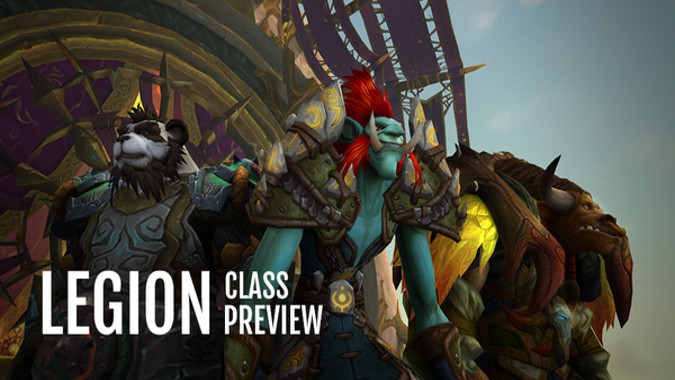 If you’re curious about how your class is going to change in Legion, Blizzard is presenting a series of posts about each class in turn, according to this overview post that went live on the official site today.

We’ll see a series of posts, each outlining a specific class and how it will be changing — this Sunday, November 8th we’ll see the Hunter class preview, followed by Priests, Mages and Paladins on November 9th, Warlocks, Death Knights and Shamans on the 10th, Warriors, Monks and Druids on the 11th and Rogues on the 12th. The complete Overview is below.

Originally Posted by Blizzard Entertainment (Blue Tracker)
Welcome to the first of several blogs focused on classes in the upcoming Legion expansion!

Our first big step when we begin working on classes for any new expansion is to decide on our high-level goals. New expansions, which send players to whole new lands and often transform entire game systems, give us a chance to explore extensive changes that we think will have a significant positive, lasting impact on the game.

In Mists of Pandaria, for example, our primary aim was to revamp the talent system to give players more meaningful choices. For Warlords of Draenor, we turned our attention to the 100 levels worth of accumulated spells and abilities, full of redundancies and crowding out players’ action bars, and focused our efforts on pruning and consolidating abilities to make each class’s kit leaner and meaner—while still leaving room for future additions.

Going into Legion, our guiding purpose is to strengthen the distinctive identity of each of our 12 classes and their specializations. The scope of these efforts includes making cosmetic improvements, enhancing existing abilities, adding new abilities, replacing too-generic abilities with more iconic ones, adjusting rotations to better reflect spec identity, and even completely redesigning some specs to carve out a strong identity where previously there was none.

In the coming days, we’ll be sharing more details about the direction of each class in Legion, discussing their updated designs and sharing a look at their core combat abilities. It’s important to note that the base spells of a specialization represent a foundation upon which talents and Artifact traits will be built. Talents in particular will add a tremendous amount of depth—in Legion we’re quadrupling the number of spec-specific talents, which reinforce the distinction between specializations giving players interesting ways to customize their characters to suit their play styles.

We’re looking forward to hearing your feedback and discussing these changes with everyone in the weeks ahead, and we’re excited to get this information out before our broader beta phase to make sure we have as much time as possible to iterate and carry on the conversation.

Blizzard Watch is made possible by people like you.
Please consider supporting our Patreon!
Filed Under: Class Overview, Legion, Legion Class Preview
Advertisement