The WoW Legion class preview is up for Druids, and it’s much as we expected. Feral and Restoration Druids are only seeing minor tweaks since they are in a good place, Guardians are getting better tanking abilities to complement their class fantasy, and ding dong the Eclipse mechanic is dead!

In addition, the devs are addressing the issue of shape shifting being part of the class fantasy by giving Druids a new row of talents called Affinity. Each talent in the Affinity row will be one of the three specs you aren’t currently in. For example, if you are currently Resto specced, your three Affinity talent choices will be: Balance Affinity, Feral Affinity and Guardian Affinity. When this talent is activated, you will get abilities for that Affinity spec that are more powerful than if you shifted into that spec. For example, right now if you are Balance specced, you have a great deal of Intelligence gear which means if you shift to cat, your abilities are awful because you lack the Agility to power them. But in Legion, if you are Balance and you activate your Feral Affinity talent, you will shift into cat and have access to more powerful cat abilities than you would otherwise. Affinities will also grant a passive bonus no matter what form you’re in.

Read on for more details on the tweaks for each spec!

The Eclipse Bar has been completely replaced by an Astral Power resource, which is built and spent, and provides a platform for abilities to create interesting, engaging, and powerful effects

Yes! No more whack-a-mole Eclipse bar. Seriously, I didn’t play as a Moonkin through all of Warlords because that mechanic was so awful. In its place is Astral Power, a resource gained by casting either a quick, moderate damage nuke, or a longer-casting, stronger-damage nuke. Once you’ve built up enough Astral Power, you can let loose a massive damage spell and generate a buff to increase the damage of your small nukes. You also get your tried-and-true AOE DoT Starfall, but this time with no cooldown. It’s now Astral Power, um, powered. And of course, you still have Moonfire and Sunfire DoTs, but the latter has a small AOE radius as well. I’m very happy with these changes, and can’t wait to see them in action. The Boomkin have returned!

Design changes in Legion are tempered, and we’re paying the most attention to talent options that provide a wider array of combat customization.

Cat spec was in a really good place in Draenor. With positioning requirements removed and stronger talents plus some long awaited AOE damage buffs, I didn’t think there would be much tweaking to be done in Legion, and I was right. Feral is staying pretty much the same except for the devs focusing on some more compelling talent choices which I can’t complain about. At all. One talent given as an example, Jagged Wounds, is a passive that makes “Your Rip, Rake, and Thrash abilities deal the same damage as normal, but in 33% less time.” That already looks delicious. 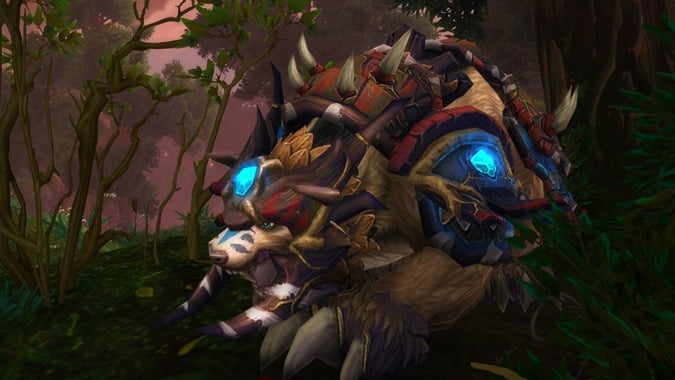 Bear tanks have long relied on avoidance as a primary damage mitigation tactic, and the devs feel that just doesn’t fit the class fantasy of being a massive beast. So instead they are going to de-emphasize Dodge and instead focus on health, armor, mitigation and regeneration. These new defensive abilities look legit. They include being able to temporarily double your armor (stackable!), reduce magic damage, and a revamped Frenzied Regeneration that will “Heal you for 100% of all damage taken in the last 6 sec over 6 sec (minimum 5% of maximum health).”

Offensively, not much has changed as your primary abilities are still Mangle for run speed debuff and bleeds, both single-target and AOE, to build Fury to spend on your defensive abilities. You also get Moonfire for ranged pulling. One interesting talent shown will enhance your Lacerate bleed to both decrease enemy damage, and increase your own on the target.

Restoration Druid themes are clearly defined, and there’s a lot of cohesive flavor to love in how the spec plays. As a result, we’re making minimal changes.

Like Cat, Tree druids were in solid shape in Draenor. The combination of HOTs with single target heals, a few AOE heals and some emergency heals made for a solid kit. Most of this preview is focusing on changes to the rather lackluster current Mastery. The new Mastery: Harmony reads as “Your healing is increased by 10% for each of your Restoration heal over time effects on the target.” Much more clean and emphasizes what Druid healers are good at: stacking HOTs.

I particularly like this new talent Flourish: “Extend the duration of all of your heal over time effects on friendly targets within 60 yards by 10 sec.” That could be a lifesaver at a critical moment. If the devs have some equally compelling choices for that talent tier, it’s going to be a tough call.

You can read the full Druid class preview on the official site. You can also read previous class preview blogs here on Blizzard Watch. There’s only one class preview left, and that’s for Rogues which should drop sometime tomorrow. We’re already rolling out class columns taking a deeper look into these previews. Check back for analysis of your favorite spec.

EDIT: Added in the active ability associated with Affinity. Thanks, Krald, for the catch!

EDIT 2: Revised the Affinity section to be even more clear.