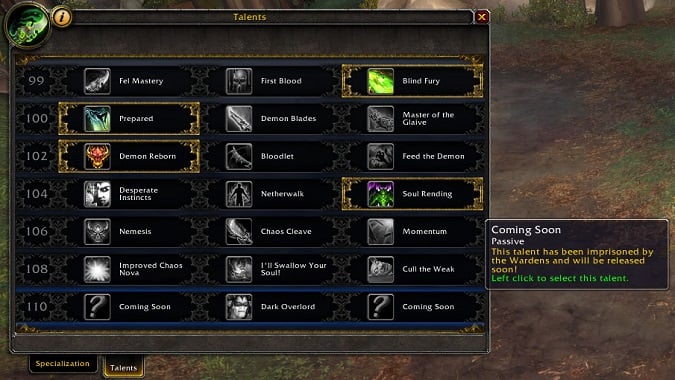 Sometimes “Soon” means “Soon™,” other times it actually means soon. Turns out, Havoc Demon Hunter talents fall in the rare category of the latter, as today’s Legion alpha build revealed almost all of the new class’s talents for its DPS spec (sadly, the Vengeance spec is still missing). In addition to a few talents swapped around, Havoc Demon Hunters are now only missing two talent choices, both at level 110. Previously, we’d only seen talents up through level 104, and even that tier was missing an option.

Join us after the break for a rundown of all the new talents. 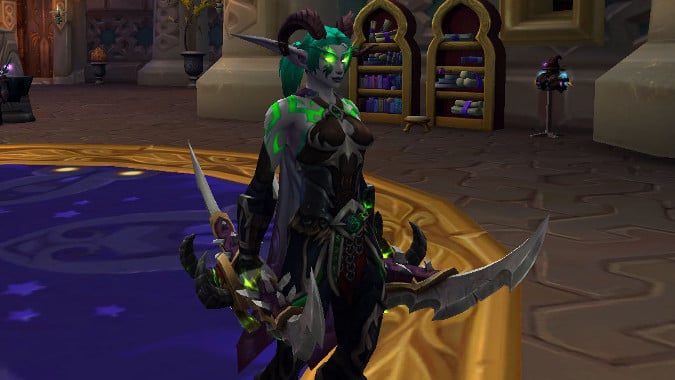 Fel Mastery: Increases the damage of Fel Rush by 50%, and gain 25 Fury when Fel Rush damages at least one target.

Blind Fury: Increases the duration of Eye Beam by 50%.

First Blood has now replaced Blade Dance as a talent, with Blade Dance becoming a baseline ability. Not only does this put this talent tier all in the line of “increases X ability’s power in some way” but it means one of the coolest looking abilities will be available to all Havoc-specced Demon Hunters. Seeing as Blade Dance also added some AOE utility, I’m very happy seeing it go baseline.

Additionally, it’s nice to see different scenarios represented by each talent. I’m all for talents that feel meaningful and unique to a person’s individual playstyle!

Prepared: After using Vengeful Retreat, you generate 96 Fury over 6 sec.

Master of the Glaive: Throw Glaive does an additional 100% damage against enemies above 90% health, and the cooldown is reduced by 2 sec. each time it deals damage.

No changes to this tier as of yet. Demon’s Bite is still an interesting choice here — it feels very odd to not have a “filler” ability on a class and instead focus on autoattacks and cooldowns. It wasn’t something I particularly enjoyed, but that may be personal preference.

Demon Reborn: All your cooldowns are reset when you invoke Metamorphosis.

Bloodlet: Throw Glaive causes targets to bleed for 160% of the damage inflicted over 18 sec.

Feed the Demon: Increases the duration of your Metamorphosis by 5 sec every time you consume a Soul Fragment.

Bloodlet replaces Soul Rending (which has now moved to level 104), while the other two talents in this tier remain the same.

While I felt Soul Rending was an obvious choice in this tier, its move down to 104 leaves this tier a bit of a hodgepodge. Originally, it had been built around Metamorphosis; now, it’s two Metamorphosis talents and… a Throw Glaive modifier? Personally, I’d like to see the Leech from Soul Rending becoming passive (if maybe a little lower) because it’s still an incredibly strong choice no matter which tier it is in, and takes away some of the theme this tier had going for it. 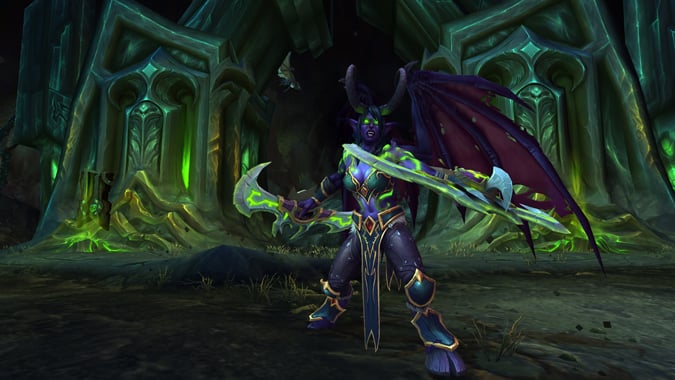 Desperate Instincts: You automatically cast Blur when you fall below 30% health. If activated automatically, the cooldown is reduced by 25 sec.

Netherwalk: Slip into the nether, increasing movement speed by 100% and becoming immune to damage, but unable to attack. Lasts 5 sec. Replaces Blue.

Soul Rending: Increases your Leech by 100% while in demon form.

Now complete, this talent tier seems to be focused around survivability. While I do like the idea of different forms of survivability, I still think I would like to see Metamorphosis with a baseline amount of Leech and a talent that increases that amount. As of now, 100% Leech in Metamorphosis is incredibly powerful and will almost assuredly keep you from dying while it’s active — no matter how many enemies you’re up against.

Nemesis: Increases damage you inflict against the target by 10% for 2 min.

When the target is slain, you will inflict 10% additional damage against all creature types matching the original target (Humanoid, Dragonkin, etc.) for the remaining duration.

While level 106 isn’t attainable yet, this tier seems to be offering various ways of increasing damage — on cooldown, passively, as a buff periodically. If you can’t tell, I’m a sucker for thematic talent tiers, and I love the idea behind this one. That being said, Momentum feels like the least situational, which may give it too much of an edge across the board. (Though the other two certainly have potential to be very useful.) 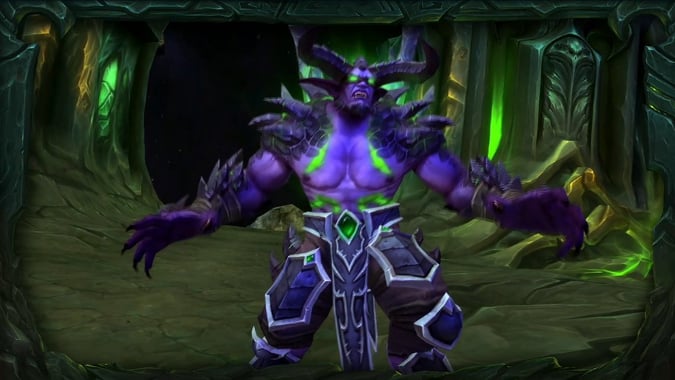 Improved Chaos Nova: Reduces the cooldown of your Chaos Nova ability by 20 sec.

Cull the Weak: You inflict additional Chaos damage against slowed and incapacitated targets.

I’m still not sure what to make of this talent tier. Improved Chaos Nova seems the most useful all around, but even then is slightly underwhelming. I’ve also felt like Fury generates rather quickly on its own, so I’ll Swallow Your Soul! not only runs the risk of Fury capping you, but it also requires adds to be useful. And Cull the Weak seems like it would be beneficial in PVP, but somewhat limited in PVE (at least against bosses).

All in all, these talents feel more built for the outdoor world or PVP. And that’s fine, but just feels out of place in the second-to-last talent tier.

Finally, the last tier for Havoc. It’s obviously incomplete, but it’s already very promising. Not only does it sound cool, but it seems like this tier may be built around damage and survivability — only, to a higher degree than preceding talents. This talent alone has me excited for future additions to this tier!

That’s all for now! Keep in mind, alpha is alpha and things could change in an instant, so be sure to keep checking Blizzard Watch for future updates!