Artifact weapons are, without a doubt, my most anticipated feature in Legion. With each new alpha build we learn more, and I think we’re at a point where we can see the basic direction Blizzard is headed. A lot of the stuff we’re about to talk about will probably change in some way, but I think it’s worthwhile giving some early feedback for Hunter Artifact weapons. Plus, I’m just really excited about these traits (Titanstrike especially). 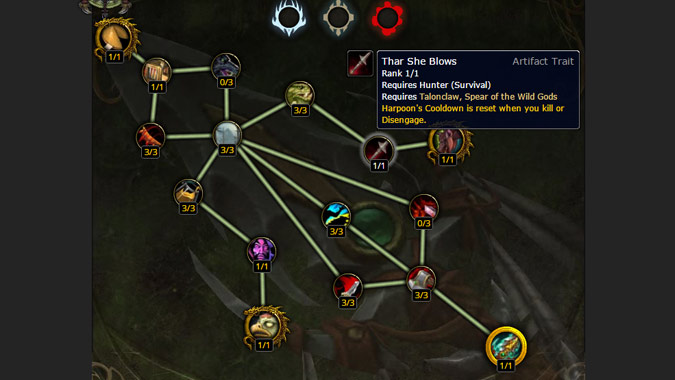 Talonclaw: Harpoon all the things

Talonclaw’s equip bonus is currently the most underwhelming of the bunch, in my opinion. Every time you kill something, the cooldown of Exhilaration is reduced by 5 seconds. I understand the idea behind it — a “Survival” Hunter should be better at surviving — but in practice I don’t think it’s something I would notice that much.

Fury of the Eagle is the first trait you unlock on your weapon, and it lets you translate your Mongoose Bite buff into extra AoE damage. It’s a channeled ability, costs zero Focus, and can currently be used while you are casting other things. I’m not sure if that last part is intentional. Right now the ability is seriously lacking in feedback, but I expect that will improve.

Most minor traits have three ranks and increase the damage of a specific ability. These will likely be the traits that can be buffed by relics (and yes, relics can take them above three ranks). The more interesting ones tend to be a single rank and reside deeper in the tree. Here are a few of those:

These are where your choices come into play. While you’ll be able to unlock them all eventually, you will have to decide which one you want first.

Overall, Talonclaw feels a bit less exciting than the other Artifacts to me. A lot of these numbers could also be incorrect and/or placeholder. For example, traits like From Behind and Superior Trapper could turn from mediocre to great if you significantly buffed the numbers. It would also put them in line with some of the stuff we’re seeing for the other artifacts. Hunter’s Fortune and Thar She Blows sound like the most fun to me. Aspect of the Skylord is also a powerful cooldown. 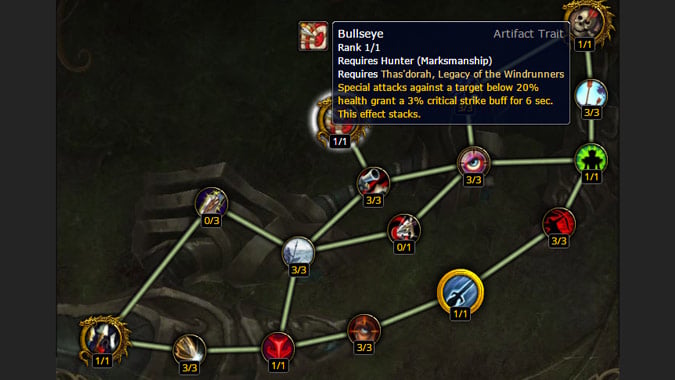 Thas’dorah’s equip bonus exemplifies what Marksmanship is all about in Legion: Arrows, arrows, and more arrows. Every time you cast Aimed Shot, there’s a chance 6 additional wind arrows will fire at your target. Wondering why Blizzard chose to make the Marksmanship artifact a bow instead of a gun? This whole “wind” theme is exactly why.

Windburst is a 45-second cooldown shot that deals heavy damage and leaves a literal trail of wind in its wake. Your allies can run through the wind trail it leaves behind for a 50% movement speed increase. This is just so darn cool. I imagine it’ll be the favored opener shot, and I can see strategies developing in both raiding and PVP where you’ll want to put your wind trail in certain spots.

In addition to buffing the damage of certain abilities, Thas’dorah traits also reduce Focus costs and modify your cooldowns. Here are some of the more interesting minor traits:

Thas’dorah seems to have more “Wow, that’s cool!” traits than Talonclaw, in my opinion. I like the idea of constantly unleashing a storm of arrows to multiple targets, even though it seems to be moving away from the original sniper theme. A trait like Bullseye puts an interesting twist on the execute mechanic (Kill Shot is gone in Legion). Call of the Hunter sounds the most fun to me, but I bet these “fallen” Hunters are really just feigning death. We all know Hunters only play dead. 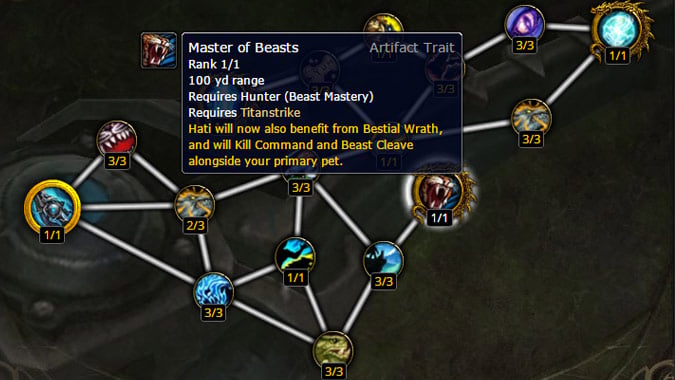 Titanstrike’s equip bonus summons Hati, the guardian of the Titanstrike. Hati is spirit beast that resembles Skoll in a lighter shade of blue (side note: Hati and Skoll are brothers in Norse mythology). Hati does not replace your primary pet, this is an actual secondary pet you will have at your side as long as Titanstrike is equipped. Dual. Wield. Pets. It’s finally happening! It sounds like Hati may start as a simple guardian pet, but one of the major traits gives him a serious upgrade.

Titanstrike Discharge is a 1-minute cooldown that causes all of your pets and Dire Beasts to discharge electrical energy (nature damage) into their target over 8 seconds. The more pets you have active, the stronger this is going to be. I wonder if will work on Stampede pets too? I really hope this has some kind of chain lightning visual that goes from your weapon to all of the pets. Why all of this nature damage? Because this isn’t an ordinary gun: “Securely housed in the heart of the rifle, a relic known as the Thunderspark powers the Titanstrike, harnessing the essence of storms and focusing it into concentrated blasts of energy. The rifle’s power source can also be credited to Mimiron, who devised it for his comrade, Keeper Thorim, in ages past.”

In addition to the standard DPS traits, Titanstrike also features several that enhance the survivability of you and your pets. Here are a few of the more unique minor traits:

Titanstrike excited me the most out of all the artifacts. Two permanent pets? It’s a dream come true! It might be going a little overboard on the whole electricity/nature damage thing, but I guess it fits into the fantasy of the weapon itself. The big questions for me is how Hati will function, and if there will be a way to customize him to another model. What happens when he dies? Can you dismiss him? Will he follow orders or act like a glorified Dire Beast? Lots of questions which will soon be answered.

You all know what my favorite Artifact is, so what’s yours? Be sure to check out Wowhead’s Artifact calculator to see all of the new traits.