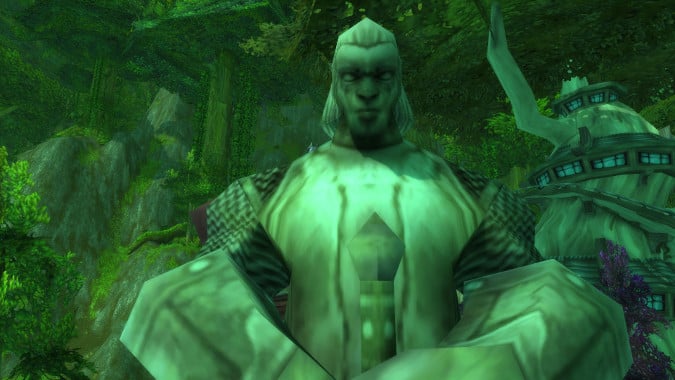 Hi. I have an incredibly bad cough and it’s utterly kicking my butt.

Let’s do the Queue. I’ll be stopping to cough a lot.

Lore Q for the (nocturnal) Queue:

Why is there a giant statue of a human warrior in Feathermoon Stronghold, and who is it a statue of?

It has no plaque and I don’t recall any quests mentioning it. It’s just kind of there where you’d expect a statue of a Sentinel or Priestess.

Near as I can tell that’s supposed to be a Gilnean. There are a lot of Worgen hanging out in Feathermoon, might be related to them. But there’s not much explanation of it in game that I could find.

New mounts for all noobs who haven’t done when it was current. Hehehe. Joking. Love you all.

(I got both when they were current. HA!)

As someone who gets raid achievements completely because other people want them and doesn’t care at all himself, I say good. Outdated content is outdated. You should be able to solo it, and making meta achievements that require a group for completion when the content itself is soloable is silly to me.

I personally don’t bother going back to DS, I already have all the gear from that raid. But if other people want to, I think they should be able to go back and get the meta done.

QftQ: Does anyone get the feeling things aren’t interesting unless they are in a state of “future change”? An example: Presently I am not playing WoW very much but I keep finding myself looking forward to the changes that are going to be coming in Legion and saying “I’m going to play a TON of that” but then I feel like I don’t play that much of it when it arrives. Looking back that’s what I did for Warlords, Mists, and Cata, but while during Mists I had the constant challenge of raiding (and was loving my monk) this still ended up happening when my guild and raid team ended.

I do this with Heroes and Hearthstone as well so its not just a WoW thing but in those games its more of a meta stagnating thing (Heroes stun-lock meta, Hearthstone Secret Pally (though LoE helped)).

I’m older than dirt and I’ve been playing WoW forever so for me this isn’t the case — instead, I dread change because I’m going to have to remember a whole bunch of changes. I usually end up learning them just fine, but over the twelve years of World of Warcraft I’ve seen a whole lot of systems come and go and sometimes I just long for something to be stable and unchanging. Like when they took Sunder Armor out and I realized ‘Wait for Sunders’ wasn’t going to make sense to anyone who started playing after that, not even as an in-joke.

Q4tQ: If the game asks you to do something you don’t want to do, or are morally against, do you do it or skip it?

It depends on if I think my character would do it.

For example, back in Mists when Jaina decided to toss the Sunreavers out of Dalaran, my Draenei Warrior felt like she was going a touch too far, but ultimately decided to back her play because he didn’t want to appear disloyal to the Alliance. My Worgen on the other hand was thrilled. Anything to hurt the Horde that bombed his homeland with plague. He gleefully took part and felt she was absolutely justified. Meanwhile, my Human Warrior skipped that quest chain.

For me it comes down to what the character would do. When I played an Orc Warrior, I took part in stuff that I wouldn’t do as a Tauren. My Tauren had to level through dungeons because none of the quests in Ashenvale, Silverpine or any of the Forsaken quests were things he’d do.

I actually like the big gaps between expansions.  It’s in these big gaps where I can really gear out my characters to the nines, level new ones, and try out new areas of the game.  When there isn’t the pressure of incoming content, I find myself with much more time to accomplish all the things I wanted to in game.  The big breaks allow me to catch up and get ready for the next expansion as well as try out things I usually don’t have the time for.

So I don’t really feel very strongly on the issue of pacing because I’ve come to rely on this chunk of buffer time to get ready for the next expansion.  I’m looking forward to Legion for sure but I’m cool with it being months away.

Personally I feel much the same as you do. If I weren’t writing about World of Warcraft and other Blizzard games, I’d likely care not at all how fast expansions came out. I’m perfectly happy with a year between last raid and next expansion, even though I recognize that it would be disastrous for the game overall if it keeps doing that.

Blizzard Watch is made possible by people like you.
Please consider supporting our Patreon!
Filed Under: Statue
Advertisement