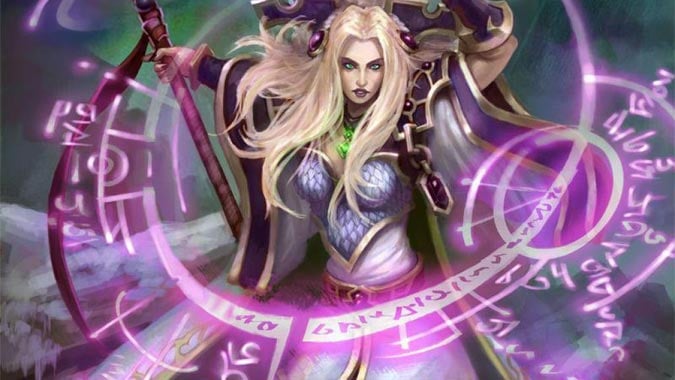 Welcome back to Arcane Sanctum, 2016 edition! It’s pretty much just like the 2015 edition except with gradually more sunshine every day. The Legion alpha became available again this week and soon we’ll have more information about Mage things. For now, we’re going to be taking a look at what we know about the three Mage Artifact weapons so far, including their traits and inherent powers. A recent Know Your Lore revealed some of the lore behind the three weapons, so be sure to check that out if you missed it!

Because of the way the Artifact traits are structured, considering them in a strict “order” is difficult. The shape of the traits even follows the weapons, and there are restrictions on how they can be unlocked, just like talent trees of old. Eventually we’ll be able to unlock all of the traits (and even increase the ranks per trait through the use of relics) but for starting out, we’ll need to choose traits strategically. Wowhead has made a great Artifact weapon calculator allowing you to see the traits in context.

Arcane – Aluneth, Greatstaff of The Magna 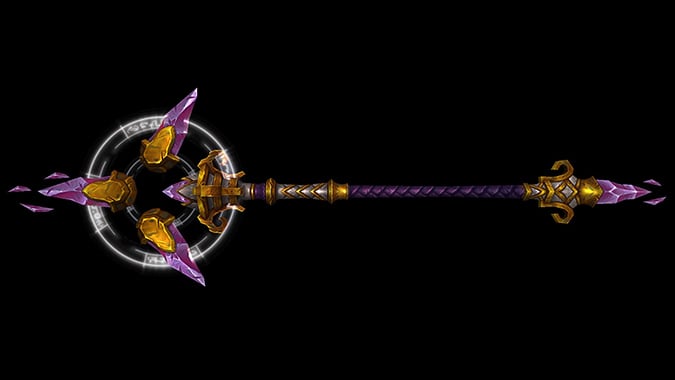 Arcane’s artifact weapon is Aluneth, a Greatstaff wielded by Aegwynn herself. Appropriately, many of the artifact’s traits are related to her. The first trait you can unlock is Power of Aegwynn, when you reach 4 Arcane Charges, you are infused with the Power of Aegwynn. This buff currently doubles your arcane damage for six seconds. Taking this initial trait unlocks access to either Might of the Guardians, a passive 10% arcane damage increase at maximum ranks, or Torrential Barrage, which increases damage dealt by Arcane Barrage only to a maximum of 10%.

The next ability unlocked is Blasting Rod, increasing damage dealt by your Arcane Blast by 6% at three ranks. Filling it out unlocks four more potential minor traits, and the choice here will be determined by which major trait you’re interested in most.

If trying to reach Aegwynn’s Ascendance, you can take either Everywhere At Once or Crackling Energy, depending on whether you’re more interested in greater mobility or a further AOE reach. Maxing out Everywhere At Once unlocks Aegwynn’s Imperative which increases the duration of your Arcane Power by six seconds. Completing Crackling Energy will give access to Aegwynn’s Wrath, increasing the chance for Arcane spells to critically strike by 6%. Aegwynn’s Ascendance is your reward for unlocking this corner of the tree. It grants you invulnerability while channeling Evocation and deals major damage based on the mana you’ve restored. This ability appears to have a 100 yard range. 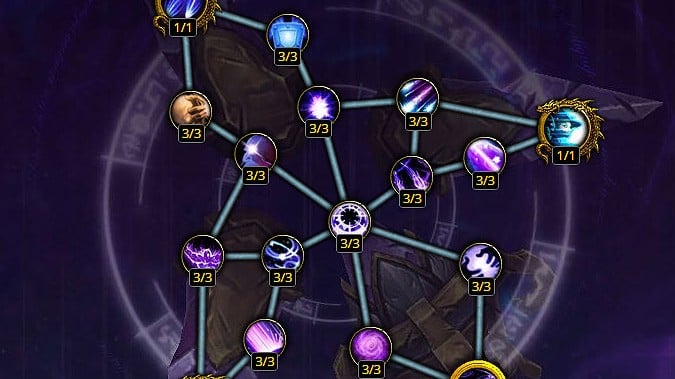 If your initial focus is the AOE boosting Arcane Rebound, you can reach it via either Everywhere At Once or Arcane Purification, which will increase the damage of your Arcane Explosion by 10%. If you took Everywhere At Once, now you can have Amethyst Awakening, which increases your Mana Pool by 300%. Otherwise, Arcane Purification unlocks Archmage’s Fortitude — a 10% damage reduction. Now you’ll have access to Arcane Rebound, allowing your Arcane Barrage to bounce up to five times. If it successfully bounces this many times, it explodes in a Supernova, dealing massive damage. This is actually a strong case to revisit and boost Torrential Barrage even though Might of the Guardians is the stronger initial choice.

Finally, if your first goal is Echoes of Aegwynn you can take Ethereal Sensitivity to increase your chance of triggering Arcane Missiles — note that the tooltip isn’t complete for this yet. Then you’ll need to fill out Aegwynn’s Fury. Or if you’ve taken Arcane Purification, then you can choose Archmage’s Alacrity to fire two additional Arcane Missiles — I’m assuming this will increase per rank but the tooltip isn’t currently accurate. Then you’ll have unlocked Echoes of Aegwynn, which summons an image of Aegwynn to assist you. We can only assume right now that this functions similarly to the two piece Raiment of the Arcanic Conclave set bonus. 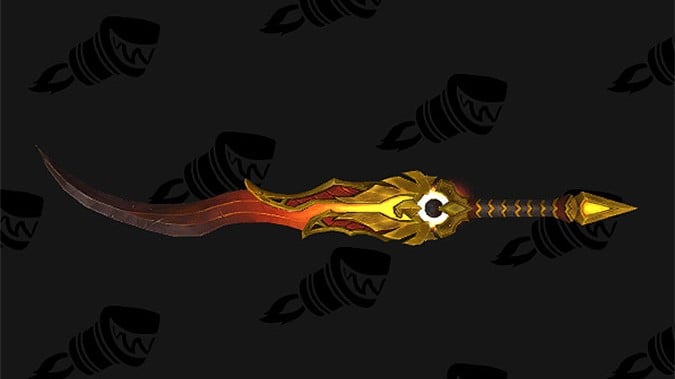 Fire Mages are the only spec to wield not a staff, but the renowned elven blade Felo’melorn. Don’t worry about the stats — Felo’melorn also comes with a built in off-hand. Equipping this artifact weapon allows you to begin accumulating Flame Orbs. These cause your Pyroblast to be replaced by Phoenix’s Flames. The first trait unlocked on the weapon is Phoenix Reborn, which deals 10000 damage to each ignited target, and grants a Flame Orb for each Phoenix birthed.

Currently, one of the three major traits isn’t implemented. The minor traits leading to it are Aftershocks, Scorched Earth and Everburning Consumption. Initially unlocked traits are Molten Skin, which increases the damage reduction of your Molten Armor. Great Balls Of Fire increases the damage of your Fireball by 15% at max rank, and Pyroclasmic Paranoia adds 10% additional damage to Pyroblast. 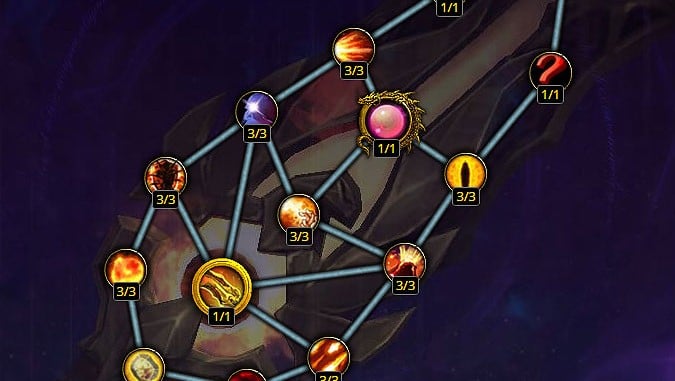 The next unlocked abilities include Cauterizing Blink, a neat idea that will add a small heal over time component each time you Blink. Fire at Will reduces the cast time of Fireball by 0.3 seconds. Burning Gaze increases fire damage dealt by 10%. Maxing these out will grant you access to the major trait Pyretic Incantation. This intriguing ability makes it so that every consecutive critical strike you achieve increases your critical strike damage by 15%. I have some very strong, fiery feelings about this that I’m too busy laughing maniacally to fully articulate.

The last minor trait that’s currently available is By Fire Be Purged, and this is pretty interesting too. Your Fireball will dispel one beneficial effect — think of it like a burning, less mana-intensive Spellsteal that happens automatically. I’d take it! (Although in the way of Fire mages, you don’t actually steal the spell, you just ruin it for anyone else). This finally unlocks Blast Furnace, the last major trait Felo’melorn has. Inferno Blast now applies Crucible of Flames, dealing additional damage over nine seconds. 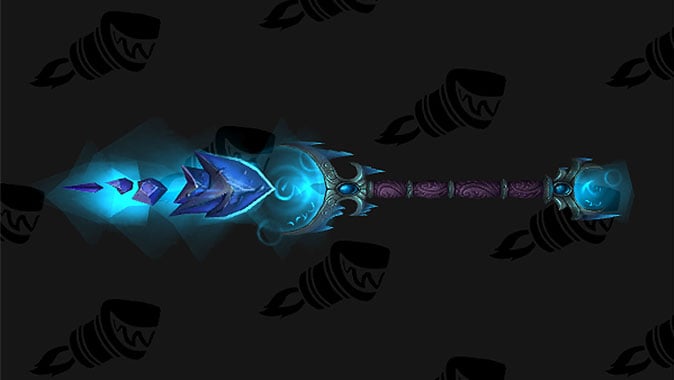 Finally, we arrive at Frost’s artifact weapon, Ebonchill, Greatstaff of Alodi. Like Fire, there’s a major and a minor trait still missing here. The initial artifact trait is Ebonbolt, which replaces your Frostbolt with Ebonbolt. How this trait will work is still unclear and we won’t know more until it’s implemented on the alpha, but currently it seems to launch multiple bolts in place of a single one.

One of the first minor traits to choose from is Let It Go, if you’d like to go build your own ice palace while also increasing the critical damage of your Ice Lance by 30% at max rank. The other available trait is Frozen Veins, which reduces the cooldown of your Icy Veins on Frostbolt crits.

From there you can choose Permafrost, reducing damage taken by 10%, or The Storm Rages to increase the critical strike chance of your Blizzard by 30%. Shield of Alodi is a trait that will increase the magnitude of your Ice Barrier by 60% and grants access to the major trait Black Icicle. The “black ice” theme of this artifact promises to be thematically really interesting, as this trait will cause your frost spells to also generate an inconsumable Black Icicle that triggers of its own volition. On the other side of the “tree” the minor trait Icy Caress increases the damage of your Frostbolt by 30% and leads to the major trait that isn’t yet implemented. 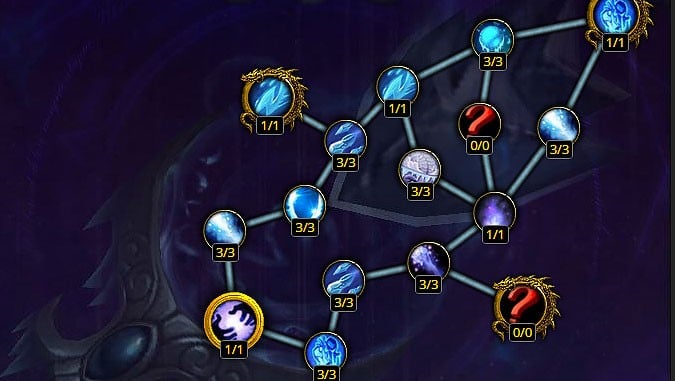 To finish out the tree, you can choose between the minor traits Chain Reaction causing your Frostbolt critical strikes to apply Empowered Ice Lance, doubling the damage of your next Ice Lance. Clarity of Thought increases the chance to trigger Brain Freeze by 10%, which is pretty straightforward. Flash Freeze is another surprising choice that I appreciate, resetting your cooldowns when you successfully interrupt. There’s an incentive for you to keep your Counterspell button close to your heart!

The final two minor traits (there’s one missing here for now) are Orbital Strike, increasing the damage of your Frozen Orb by 15%, and Ice Age, increasing the critical strike damage of your Frozen Orb by 30%. The final major trait available right now is not kidding around. Chilled To The Core makes it so that activating Icy Veins encases you in ice, increasing your frost damage dealt by 100%. The combined impact of all of these traits if you look at them as a whole hints that critical strike may gain an increased significance for Frost Mages in Legion.

A weapon for every Mage

Depending on your primary specialization of choice, any of these three Artifact weapons should provide a notable initial boost and alteration of gameplay. They’re not quite like anything we’ve experienced before. And if the traits remain the way they are, by the time Legion is finished and the Artifact weapons are fleshed out, maybe we will be giving Khadgar a run for his money with our flashy phoenixes, giant black icicles, and summoning mage ghosts out of the ether to whallop our enemies. Maybe they’ll introduce an “Archmage” title just for us. We can always hope!