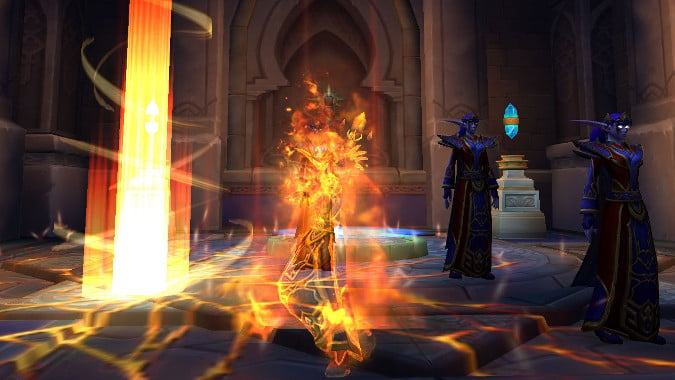 Our look at Artifact weapons at last comes to those wielded by Mages, the masters of Fire, Frost, and the Arcane. Mages have had quite an impact on the history of Azeroth, from those Highborne who allied with Azshara and the Burning Legion to those who stood against them and fought to preserve Azeroth. Night Elves, High Elves, Blood Elves, Humans, Gnomes, and others have stood in their turn as casters of great magics, and in the modern world others have joined their ranks. Orcs, Forsaken, Trolls, almost everyone can learn to be a Mage and join the ranks of the Kirin Tor in this, potentially their darkest hour.

Some say it’s darkest before the dawn. Mages prefer to light the way themselves rather than wait for another source.

This will of course contain spoilers for Legion. 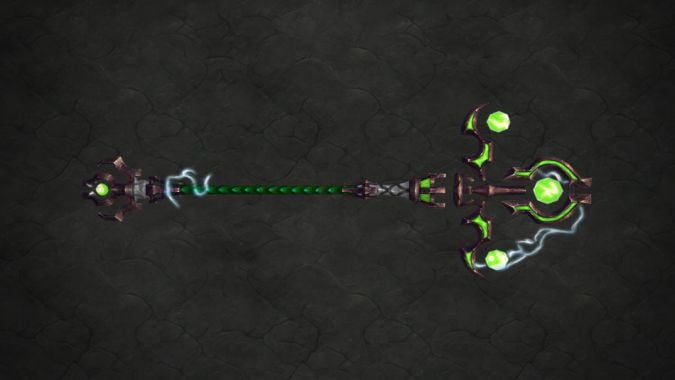 Aluneth, Greatstaff of the Magna

Aluneth was most notably wielded for a time by Aegwynn, the only female Guardian of Tirisfal, although stories indicate that it is far older than she. She is said to have found the staff roughly a century after she took up the mantle of Guardian, and to have wielded Aluneth in many battles against the Burning Legion. Several years before relinquishing her title, she retired the staff, but none know where she might have stored it.

The Magna in question, Magna Aegwynn, was the Guardian of Tirisfal for hundreds of years. It was she who balked the Avatar of Sargeras and placed his corpse in the Tomb that bears his name today. It was she who unwittingly served as the means by which Sargeras took control of her son, Medivh, and thus almost allowed the Legion to destroy Azeroth with their Orcish catspaws in the First and Second War. Aegwynn is supposedly dead today, but her power and knowledge (she was one of the longest lived of the Guardians of Tirisfal) could well spell the difference between success and failure as we go to war with the demonic hosts of the Burning Legion. Originally the position of Guardian of Tirisfal was created to do battle with such horrors, and Aegwynn fought many in her hundreds of years as Guardian. What has this staff seen? Who holds it now? What must we do to reclaim it? We’ll find out shortly. I for one wouldn’t mind discovering that Aegwynn isn’t quite as dead as we’ve been told. 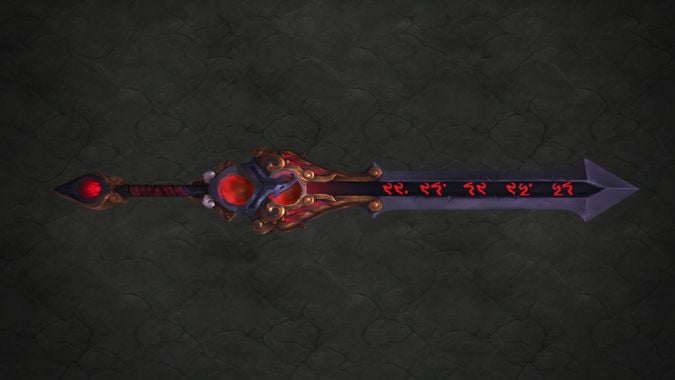 “Flamestrike” in its native tongue, Felo’melorn was borne into battle by members of the Sunstrider family as they proved their valor in the War of the Ancients, during the Troll Wars, and against the death knight Arthas Menethil. After it was destroyed, Prince Kael’thas Sunstrider reforged the sword to be even stronger and used it against the Lich King, trading several blows with the demonic runeblade Frostmourne. Ultimately Kael’thas was forced to retreat, and the sword was lost in the frigid wastes of Northrend.

Felo’melorn is the elven runeblade originally wielded by the Sunstrider line, dating back to Dath’remar Sunstrider himself. It is said to predate the War of the Ancients and saw use against the Legion in that long ago war, and accompanied the Sunstrider line when Dath’remar led the Highborne on their exile from the shores of Kalimdor and to the Eastern Kingdoms some ten thousand years ago.

Proof that the secret of forging runeblades is not unique to the Legion, Felo’melorn has served each Sunstrider king in turn until Anasterian Sunstrider used the blade to defend Quel’Thalas against the Scourge and Arthas Menethil, the Death Knight servant of the Lich King, as he sought to use the Sunwell to bring Kel’Thuzad forth as an unholy undead Lich. Felo’melorn shattered in the battle with Arthas (not before wounding his mount, Invincible) but the blade was reclaimed and reforged by his son Kael’thas Sunstrider. Kael’thas later stated that elven runeblades grew stronger when reforged, and indeed Felo’melorn could not be shattered again by Arthas’ own sword Frostmourne. Still, in the end Kael’thas was forced to retreat without the blade.

Where has Felo’melorn (the name means ‘Flamestrike’ in Thalassian) been since this battle? Why did Kael’thas not seek to retrieve so powerful a symbol of his people, his family line, and the battle against horrors such as the Scourge and the Legion? Flamestrike is the only Artifact currently available for Mages on the Alpha and we learn that the Sunstrider line had at least one more member, albeit one who was distant enough that it was felt there was no legitimate claim to the throne. The Scourge is also involved. This Blood Elf, Lyandra Sunstrider, left to seek the runeblade at some point after Kael’thas’ betrayal of his people became known, perhaps simply to return the runeblade to the Blood Elves… or perhaps seeking to return wielding the ancient Sunstrider runeblade and in so doing legitimizing her own claim to the throne. However, such never came to pass, and Lyandra instead became a minion of the Scourge, slain on her quest to find Felo’melorn. It falls to another mage to rescue the blade from the hand of Lyandra Sunstrider.

So ends the Sunstrider line, unless Lyandra has any other relatives as yet unknown, but also it returns Felo’melorn to the world. Hopefully its power will burn many demons to ash. 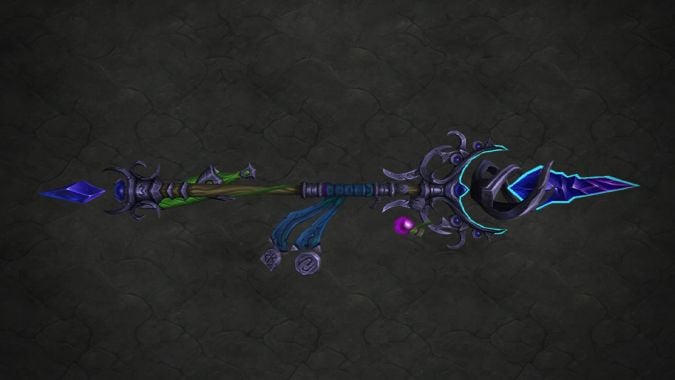 This greatstaff was wielded by Alodi, the first Guardian of Tirisfal. He bore the staff into many battles against Legion forces for the century in which he served as Guardian, then stepped down from the role of Guardian, but he retained the staff to his dying day. Upon his passing, the Kirin Tor stored the staff safely away for fear of what might happen if a lesser mage attempted to wield its power without the ability to control it fully.

Alodi was the first Guardian of Tirisfal, the one who helped develop the rite that created Guardians. Before Alodi, the Council of Tirisfal had to physically accompany the ‘spearhead’ that they lent their power to, and channel that power directly into him or her for the length of time that power was being used to defeat demons and other threats to Azeroth. Alodi found a way to create a permanent transfer of power, so that the newly christened Guardian could go forth and confront such monstrosities without the Council having to endanger itself by traveling along and channeling. For this act, Alodi was appointed the first to undergo the rite, and became the first Guardian. A half-elf by birth, he used this greatstaff as his weapon before and after he became Guardian.

As part of the class Artifact quests, Alodi’s spirit is briefly awakened in a device called the Forge of the Guardian, and travels to the Mage class order hall, the Hall of the Guardian, where he offers the quest to retrieve his staff Ebonchill. At present it’s not open on the Alpha, so we can only state that the weapon will be part of the long term goal of defeating the Dreadlord Kathra’Natir.