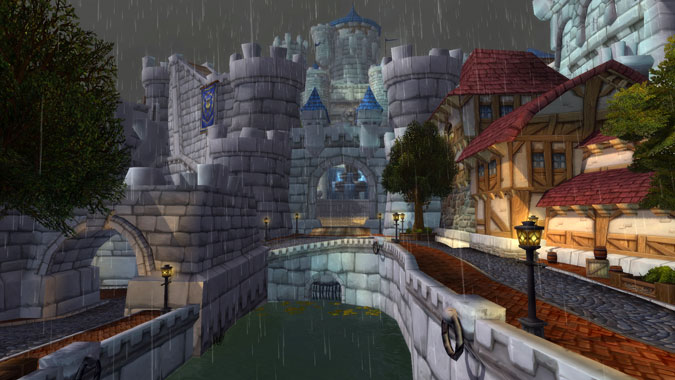 Way back in March of 2006, World of Warcraft got patch 1.10.0, a minor patch that introduced the quest chains for Dungeon Set 2 (or Tier 0.5), an overhaul of Priest talents, and one other very important thing: weather. Up until that point, weather simply didn’t exist on Azeroth, it was clear skies all around. It was possibly the last thing I ever really considered in terms of ‘this is something we really need,’ but once I logged in to a rainy day in Elwynn Forest, I realized just how cool it really was. But to my knowledge, it never actually rained in Stormwind. I never witnessed it raining in the city — it could be pouring in Elwynn, but once you crossed those gates to get into Stormwind, the skies were always clear.

When I logged in to the Legion alpha the other day, it was actually raining in Stormwind.

The first thought I had upon seeing this was to check and see if someone was using a rain stone — nope, definitely not. The second was to try and rack my brain to remember if I’d ever actually seen rain in Stormwind before, because when I witnessed this rain storm, I felt like it was something I’d never experienced in game before. I couldn’t remember if this was common or not, so I decided to check in with Twitter, because there are far more people over there that play Alliance full-time and likely had a better answer for me. Was this actually a new thing, or was I just imagining it?

Turns out, the jury is still out on that front. While I had several people exclaim over the screenshot above and declare it never rained in Stormwind, I had just as many people say that they had witnessed rain, it was just a very rare experience. So now I’m going to throw the question to you guys: Has it ever rained in Stormwind before? Is this some kind of unannounced alpha thing, or is it something very seldom witnessed, and I just happened to be in the right place and the right time to see it myself? Would you like to see more weather events happen in game? Would more storms in Stormwind, not to mention the rest of the world, make your day?

Blizzard Watch is made possible by people like you.
Please consider supporting our Patreon!
Filed Under: In Game Weather, Legion Alpha, Rain, Stormwind, Weather Effects
Advertisement