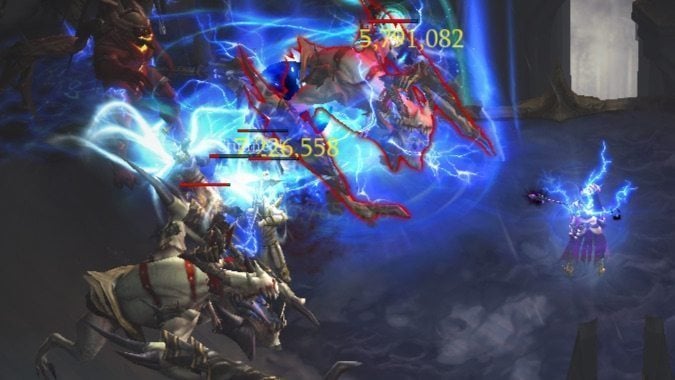 We don’t always see the thought that goes into Blizzard’s decision-making process, but the engineers on the Diablo team have given us a peek behind the curtain at something that’s more interesting than you might guess: the numbers.

No, don’t leave — I promise, this is interesting stuff. Games like Diablo (and WoW, too) are built around numbers: your stats, your gear, your damage. “Behind each of those digits is a huge amount of tech that makes them behave the way that they do,” Blizzard explains. In World of Warcraft, we get a lot of details about these numbers with in-depth combat logs and addons that measure every aspect of the number game. But in Diablo, that’s not quite the case — instead, the numbers are more ephemeral, popping up on the screen and then vanishing again, never to be recorded.

It’s a system that suits Diablo’s fast-paced style, but the developers have continued to tweak it so what we see is just right — but how do they make those calls? The whole piece is fascinating look behind the scenes and offers the sort of design insight I absolutely love to see.

As players have racked up the Paragon levels, Diablo 3‘s numbers have gotten pretty overwhelming — and much like the way WoW had to do a stat squish, those numbers needed to be pared down. It had been exciting to see large numbers pop up when Diablo 3 was newer, but now those numbers are a constant, crowding the screen… and that just wasn’t exciting. In patch 2.4.0, the Diablo team has tried to address this while still making you feel like your character’s doing big damage.

First, players now have the option to truncate numbers using toggle-able abbreviations (for example, 1769M instead of 1,769,000,000). But are these truncated numbers still exciting to players?

There’s a real psychology behind player satisfaction and the actual length of the numbers you’re seeing, and player preference varies on both personal and cultural levels. For example, in English, we opted not to abbreviate in the low millions because seeing “1,000,000” is much more satisfying than “1M.” Skipping the billions place also helped with this, as seeing “1,000M” tells a much more exciting story than “1B.”

To help keep those numbers exciting, another new feature highlights larger damage numbers in different colors. Which numbers appear in orange? The process of deciding this was more complicated than one might expect, but eventually the following system was put in place:

The next challenge? Localization. When you’re talking numbers, you might think language barriers wouldn’t come into play… and you’d be wrong. Diablo 3 is published in 13 languages and not every language talks about numbers in the same way.

Here’s an example where what might look like a simple translation can get complicated. Some languages, like Spanish or French, do not commonly use a unique term for “billion.” They instead refer to that amount as what literally translates to “one thousand million” rather than having their own word. In terms of etymology, this is a result of both American and British English evolving the word “billion” to mean “one thousand million” rather than the “one million million” it originally represented.

This has been my first season really diving into Diablo 3 on my own and I admit, the numbers are a bit overwhelming even still. But after reading this blog post, I’ve been noticing my numbers quite a bit more and subconsciously tracking which effects stick out in my mind more than others. It’s a lot easier to understand what each number means now and I have a new appreciation for everything that went into making that orange number exactly what it is.

If you’re interested in the tech behind the game — or just the meaning behind those numbers — this article is an incredibly interesting read (and goes into a lot more detail than we have here). Hopefully we’re able to see more insight like this one from across all of the Blizzard universes.