Affliction is still the only Warlock spec available on the Legion alpha, though Demonology got a literal new skin for its Artifact that’s still not implemented. We need to step it up; perhaps we should sacrifice more Mages to the developer gods to get another spec to play. We’ll storm into their libraries and crack all the spines on their books right before we harvest their souls.

In the meantime, we can talk about Ulthalesh, the Artifact that is unfortunately leaving us Warlocks a little tormented instead of reaping our enemies.

We already talked a bit about Reap Soul when we discussed some of Affliction’s spells, but Reap Soul is the only active ability and the trait you start with when you activate Ulthalesh, the Deadwind Harvester. Everything else is a passive trait that buffs one or more abilities.

Although we will eventually gain enough Artifact Power to max out all of the traits, I find the arrangement of some traits and their paths between each other to be a little odd. For example, the traits that buff the damage of Drain Life and Agony are in a line, but then Corruption and all Shadow damage are off on another strand. Perhaps spreading the traits out forces you to explore other traits rather than picking the obvious buffs to your damage, but I find it weird that you have to pick up traits you may not want in order to get to get to traits that you really want. For example, the shortest way to Harvester of Souls, which is the most single-target of the end traits, is not in fact through the traits that increase either Corruption or Drain damage. You have to pick up Seed of Corruption detonation damage, Unstable Affliction chance to reapply, and overall damage taken reduction. As others have said before, it feels like a rehash of Vanilla WoW talent builds, and it’s unsurprisingly just as boring. 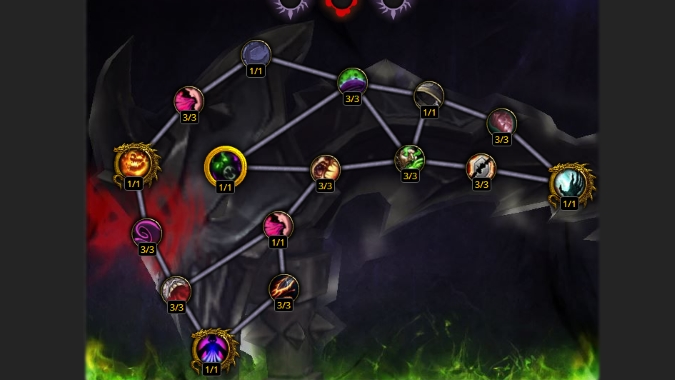 There are a couple traits that aren’t cut-and-dry increases to self-healing or damage. Compound Interest introduces a relationship between Agony, Corruption, and Unstable Affliction. Agony and Corruption are our instant cast DOTs that are easy to apply to other targets, and Unstable Affliction is our primary Soul Shard spender. Agony, in particular, will generate Soul Shards for us in Legion, and with the personal targets theme from Ulthalesh’s spawned Tormented Souls as well as the level 110 talent Soul Effigy, we’ll have plenty of extra targets as Affliction to help generate our secondary resource. With the end trait Harvester of Souls in mind, Corruption will also have a purpose for being cast on multiple targets. This trait will probably encourage the Warlock to load up Agony and Corruption on secondary targets in

Another interesting trait is Sweet Souls, which allows your Healthstone to be a full-health heal in addition to healing you when party members use a Warlock cookie. Although the goals for healing are to not scale so quickly, hoping to result in less quick and big healing, I’m not sure that raid member use of Healthstones will be of much use to the Warlock, other than the personal full-health use. Right now, raids often use the health potion as a raid cooldown, where everyone may use their personals (including health potions) at the same time. In the case of targeted healing, a party member might use a health potion to save themselves, but this results in wasted overhealing for the Warlock. Not to mention that we just spent an expansion training people to not take Healthstones as they were less effective than the crafted Healing Tonic, and now we want to change back? 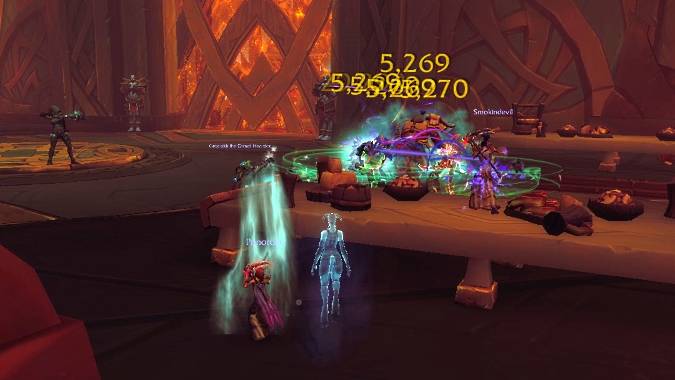 I am disappointed with the end traits, as two of them revolve around mandatory multiple targets in order to work or be meaningful. Harvester of Souls seems to be the only one that will work on a single target or Patchwerk kind of situation, which means the vague but popular simulation results may underestimate the power of Affliction.

Soul Flame has a Shadowflame damage burst when the target dies. Now, the trait is triggering without having been selected yet, so mobs being killed by Warlocks on alpha have a noisy green fire patch that does damage to everything in a small radius. If this explosion is the trait prematurely triggering, then it’ll be a boon and a curse that it triggers off the artifact’s spawned Tormented Souls. The boon is that we get free damage off personal targets, but the curse is that we don’t really control where the explosion will happen because Tormented Souls float wherever they feel like.

Wrath of Consumption is also triggering on alpha with every mob death without my selection of the trait yet. You can potentially have a 10% damage buff to all periodic damage if you maintain five stacks of the buff, but as the buff is only 10 seconds long, I found this difficult to reach and maintain, even in mob-heavy places like dungeons or questing. It requires methodical killing of mobs to keep refreshing the buff rather than killing everything at once, which grants you the maximum buff immediately, but then there’s nothing around to kill again to keep the buff going. 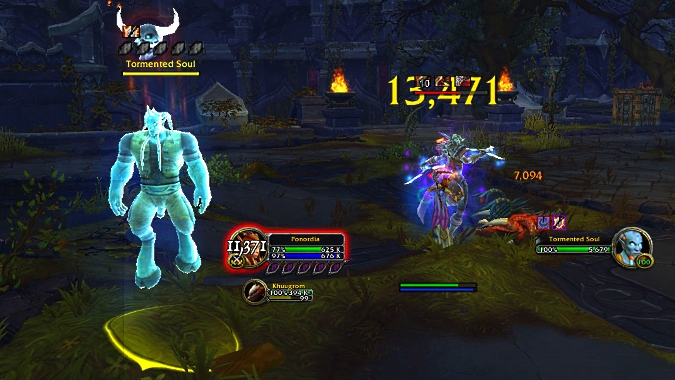 Part of Ulthalesh’s fantasy is that the souls it harvested are trying to escape. Periodically as you deal damage, Draenei and Orc ghosts of both genders will spawn near you and float toward your target. They have very little health, and if you kill them, they are supposed to reward you with some returned mana.

Every new expansion, the alpha/beta features a Warlock whose self-healing is nerfed to subterranean levels, until the developers relearn that we need our self-healing in order to not Life Tap ourselves to death. Our self-healing that eventually grows out of control is required because of our unique method of mana regeneration. We could stand to lose some self-healing if we didn’t need to Life Tap so much. Tormented Souls are interesting, because they represent a way for us to get mana back without having to require a lot of passive self-healing all the time. We can have self-healing limited to a DOT or to our use-on-purpose filler without suffering the consequences of Life Tap slowly killing us.

Unfortunately for alpha testing, Tormented Souls haven’t refunded mana since late November. Life on alpha is a bit difficult, especially in dungeons, because although Affliction Warlock play is encouraged heavily to multidot, we’re forced into Draining Life in order to survive. 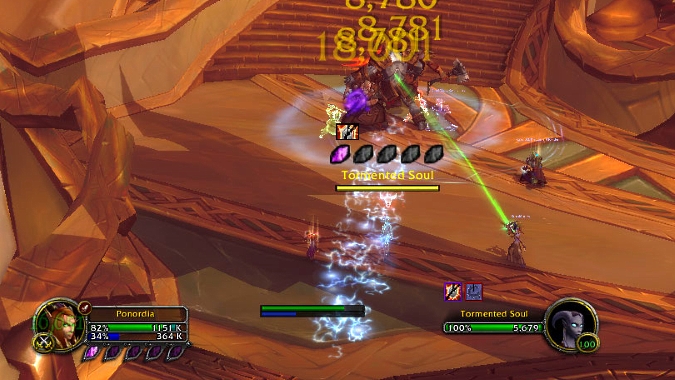 Tormented Souls work with the other aspects and traits of Ulthalesh. They explode with Soul Flame when they die, and they also contribute to the stacking buff Wrath of Consumption, even though they don’t quite spawn fast enough to maintain the buff. However, Tormented Souls are extremely buggy on the alpha right now, and they’ve become a major pain to deal with.

Tormented Souls are visible only to the Warlock they spawned from, so no one’s stealing your souls. Around half the time, Tormented Souls will Evade the Warlock, and the solution is for them to refind the Warlock’s position and float directly on top of you, much like buggy pets do. The terrain you’re in can cause the Tormented Soul to take ridiculously long paths around just to come back next to you. There are plenty of visual issues with the Souls: they’re ghosts, so if you have any kind of lightning or spectral-looking floor fire, good luck finding them without nameplates. 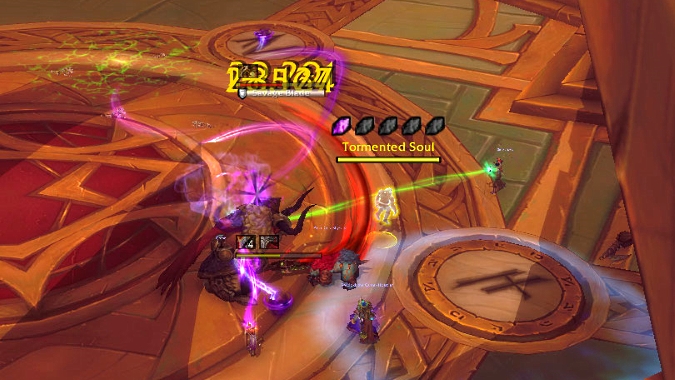 Tormented Souls are only the size of normal player characters, which means being zoomed out makes picking Souls out difficult, especially if you have to stay stacked up. In the picture above, I couldn’t even target the Tormented Soul until the boss was moved back, because the soul was slowly floating underneath — and that boss isn’t even remotely humongous! Several times when I meant to target a Tormented Soul, I accidentally grabbed a party member in melee, so the mechanic almost necessitates a targeting macro.

Although the concepts behind Tormented Souls are interesting — the mana return as well as the synergy with buffs like Wrath of Consumption — the current implementation is very awkward and often annoying, even ignoring obvious pet AI-like bugs. The main pain is finding when and where the Souls have spawned and then selecting them in the middle of normal combat chaos. Affliction spends mana at a relatively even rate, because the main three periodic effects that cost mana — Agony, Corruption, and the Drains — all cost the same mana per cast or per second for Drains, so I’m not sure that we necessarily need an active mana return mechanic. Although I’m not sure that I want to request Tormented Souls become a mana-returning version of Shadowy Apparitions, I think trying to kill a Tormented Soul adds more frustration than fun, and I’d rather have a more passive illustration of tormented but ultimately Warlock-beneficial souls trying to escape the scythe.