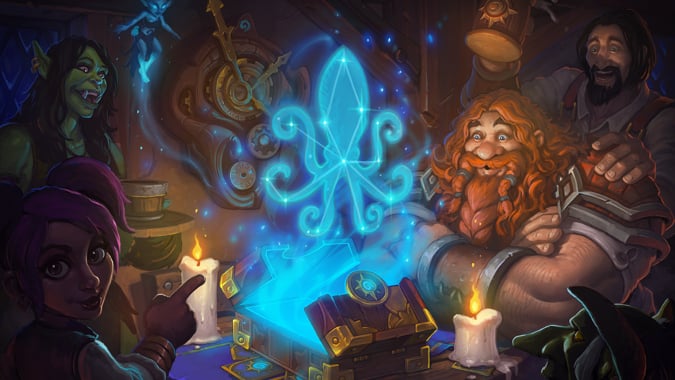 Hearthstone has just announced a new way to play: the Standard game format. As its name suggests, it will no doubt become the new standard, default way to play. In Standard, players will only be able to use basic cards, cards from the Classic set, and cards from expansions or adventures released within the last two years. Any sets more than two years old will not be available for use in Standard play — nor will they be available for purchase.

The following sets are available in Standard in 2016:

When this change goes into effect, Curse of Naxxramas and Goblins vs. Gnomes will no longer be available for purchase. Standard Mode is pulled directly from Magic: The Gathering where only the most recent sets can be used in tournament play. This change is aimed at both reducing the upfront investment required of new players and to allow the developers to shake up the metagame more easily and more often. With every new adventure or expansion, the developers are competing with some of the oldest, most powerful cards at every turn. Dr. Boom, which has been an extremely powerful drop at 7 mana ever since the release of Goblins vs. Gnomes, cannot even be played anymore in Standard Mode. The 4 mana Piloted Shredder is gone, too, as is the 5 mana Loatheb from Curse of Naxxramas.

For those players who want to continue using their full suite of cards, Wild Mode will also be available. In Wild Mode, there are no limitations on which card sets you can use — it’s the Hearthstone we know today. However, if the developers will no longer be balancing the newest sets against the oldest ones, Wild Mode will undoubtedly become more frustrating over time, especially if you consider Goblins vs. Gnomes can no longer be purchased. Players who already own all of the cards in that set will continue to be able to use them in Wild Mode, but players who don’t have that full set can’t buy them.

To coincide with the launch of these two play formats, the total number of available deckslots will increase from 9 to 18.

We highly recommend checking out the official blog post and FAQ for these changes.

While gut reaction to this might be screaming and wailing — I certainly felt it myself — this rotating play format is the standard for CCGs. Magic: The Gathering has been doing it for ages and is generally credited with saving that game and its community. If the upfront investment required of new players is exorbitant, you’ll never see anyone new on the scene. If the metagame isn’t constantly changing, long-time players will grow bored and leave. Either you put limits on which card sets can be used in ranked/tournament play, or you make each set so overpowered compared to the last one, you’re effectively doing the same thing in an (arguably) less healthy way.

Blizzard Watch is made possible by people like you.
Please consider supporting our Patreon!
Filed Under: Curse Of Naxxramas, Game Formats, Goblins Vs Gnomes, League Of Explorers, Standard, Standard Mode, The Grand Tournament, Wild
Advertisement