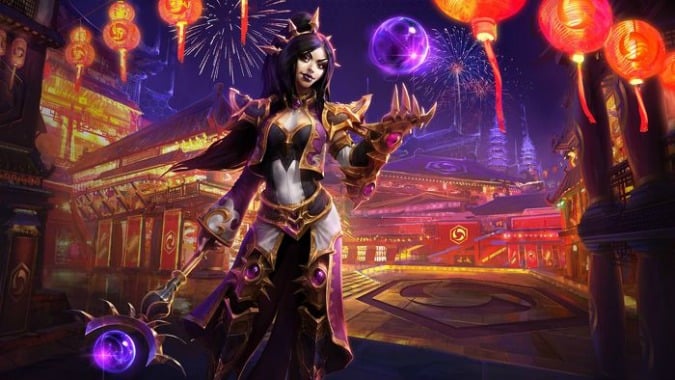 It’s yet another new week in Heroes of the Storm, which means we have a fresh weekly hero rotation, but more exciting than that is the introduction of new Assassin hero Li-Ming, who Blizzard has confirmed is headed to the Nexus. We won’t say we’re excited to see Diablo‘s Wizard join the Nexus because we don’t want to jinx it. If we have more moderate expectations, she’s bound to be great, right?

Our total lack of excitement about Li-Ming aside, we also have the Lunar Festival landing in Heroes this week alongside its counterpart in World of Warcraft. The new event comes with a daily quest as well as new festival-themed skins (and the return of some old ones) and a Lunar Dragon mount for purchase.

So now let’s dig into this week’s free heroes alongside the team’s commentary.

Since we’re so unexcited, let’s start off with Li-Ming:

Noxychu: I am a huge lover of how the Wizard plays in Diablo but the game itself doesn’t keep my interest.

Anna: I’m afraid to say that I’m excited for Li-Ming. It seems like since Sylvanas came out every hero I’ve been excited for has ended up being kinda terrible out of the gate. I will say that I’ve watched a few pros stream her from the PTR and if someone were to maybe be excited about her, it would maybe not be too much of a stretch to say they maybe should be. Maybe. She does have a high skill cap, what with all her abilities being skill shots, but the DPS in exchange seems like a game changer. …maybe. See? Not excited AT ALL.

Mitch: I haven’t played her much on the PTR, but the biggest feedback I’ve heard is that her talent design is really something else. Tons of choices that matter in each tier and lots of diversity. It may change as people crunch numbers and experiment more, but for now, it seems she’s making some other heroes feel pretty stale. Also making other heroes feel stale: the fact that she adheres to the Wizard fantasy very well. If you’ve played a Wizard in Diablo before, I think you’ll be satisfied. I’m also really curious to see how Blizzard’s approach to high skill-cap heroes works out. It seems their goal with the latest heroes but I’m wondering if they’ll toss in another Raynor sometime soon just to balance things out.

Noxychu: Can I play Li-Ming yet?

And into our regular weekly routine with not one but two poetic efforts from Mitch in celebration of our new Diablo-themed hero:

Johanna charges in, shield at the ready,
Valla readies her crossbow, her aim is steady,
Kharazim leaps in with punches and kicks,
Nazeebo prepares a spell with frogs and sticks,
And Sonya sharpens her blades,
Prepared to bring destruction in spades.

The Nephalem are ready to face the enemy team,
…but are quickly wiped out by a Disintegration Beam!

Alex: That poem was looking a bit Eminem at the start there.

Johanna charges in, she looks ready,
But beneath the shield her palms are sweaty,
Knees weak, armor’s heavy,
There’s blood on her helmet,
No wait, mom’s speghetti.
She keeps forgetting what her Q does now,
But the whole team goes loud,
She mounts her horse and it won’t slow down,
She’s trying but she can’t hearth to town,
The enemy’s jokin’ now,
But her cooldowns are up, and it’s over now!

Next up: this week’s rotation!

Alex: I feel like this is the first week in a long time where I’m not saying the same things about the same heroes. Seems like a pretty good rotation! Though I haven’t actually counted who has been on the rotation more often, it’s nice not seeing Raynor, Uther, or Muradin on this list.

Anna: With yet another wintery storm sweeping across the USA, Jaina is a good pick because the cold doesn’t bother her, anyway. Her ability to zone out other heroes (ie, make them avoid stepping in certain areas because she’ll stomp on them) is really excellent. In terms of newbie and solo play, I tend to favor her Water Elemental just because it can tank the objectives decently well. Most competitive players choose Ring of Frost, but they don’t have to contend with a terrible randomized team comp and all the warriors AFK at the base.

Alex: Jaina is in an interesting place, because she shares the same role as Kael’thas. Kael is widely considered to be the best hero for that ranged wizardy Assassin role, so any situation where you might want to be Jaina, you should be Kael instead if at all possible. That doesn’t mean Jaina is bad. It means Kael is really good. But since Jaina is on rotation and Kael isn’t, I highly recommend playing her. Her powerful AOEs which buff each other through Chilled means she can completely destroy a team that doesn’t see her coming and let themselves get piled up. I’m curious to see if Li-Ming will get lumped into the same group as Jaina and Kael in players’ eyes — because if Li-Ming turns out to be strong, Jaina could end up #3 on the Wizardy Magic Stuff list rather than #2.

Mitch: Thrall is a pretty good all-around hero and if you’re new to Assassins, he may not be a bad starting point. He’s a ton of fun and in the right hands has taken me back to some “Enhancement Shaman Windfury proc insanity” moments from Vanilla WoW PVP. The amount of burst damage he can do is pretty incredible and he’s got a solid mix of escape capabilities and team disruption.

Alex: Tychus is a character I love while knowing he sucks. Well, he doesn’t suck — he’s just unintuitive. His most effective talent build buffs his autoattack, which means about halfway through the game, you want to stop using his Q because it scales independent of his autoattack damage. Having talents which negate abilities doesn’t seem like the most useful hero design ever, but I like playing him anyway because you’re running around with a freaking minigun and his ult turns him into a huge mecha. Hell yes!

Anna: Valla is a favorite of mine. Her skill cap isn’t quite so high as some other ranged, especially with her excellent Vault escape. Her autoattack build makes life easy, even if it isn’t a big favorite in the competitive meta–she sacrifices a lot of burst, but stays healthier, especially with her level 4 talent Vampiric Assault.

Liz: I am morally obligated to link to the Azmodunk video whenever Azmodan comes up in conversation.

Anna: Azmodan is the only specialist on rotation this week, which is actually not too bad a thing. He’s kind of hard to mess up. The whole ‘azmodunk’ thing can be tricky to master, especially if you’re trying to lane with pugs (and Jaina keeps doing full AOE to wipe out a lane before your globes can even land thanks for NOTHING Jaina), but if you just need to knock out a daily, going for a build that’s heavy on the minions may be a better choice for you.

Joe: Should I write about my love of Rehgar? I mean, I really love Rehgar. If you haven’t played him by now, and you can, DO IT.

Artanis — check out our guide to Artanis

Mitch: Artanis is a fun Warrior with a bit of a weird playstyle. Like Chen, he’s super reliant on his trait. It’s imperative that you get as much active time on your shield as possible by attacking as often as you can. Most players unfamiliar with Artanis will likely start to disengage at 50% health but this is usually a surefire way to die during team fights. Much like a submarine, Artanis must dive, dive, dive to do the most damage. The shield will almost certainly keep you fighting long after you thought possible and that way I look at it, even if you’re going to die, you may as well do some damage on your way out. As an aside: his Suppression Pulse has been underrated, but I’ve found a new appreciation for it. Especially against melee/autoattack heavy comps, it can do some serious disruption to the other team.

Mitch: Chen is one of those characters who always seems to get the short end of the bow staff. He’s good but rarely amazing, and in the hands of someone who just likes to turn into a barrel and go “LOLROLLINAROUND,” it can make for a miserable experience. The barrel knockback is a lot of fun, but like most knockbacks, it’s easy to screw up your allies by pushing someone in the wrong direction. And even with that ultimate aside, his playstyle takes getting used to. He is very reliant on his trait, so you’ll wind up doing some fighting, drinking, doing some fighting, drinking, and so on. He’s a very niche hero and the best comparison I can make is that he’s kind of like fishing in WoW. Most seem to hate, but those that don’t find enjoyment in the weirdness. Okay, now I want to go play Chen…

Alex: Diablo is a hero who spent a lot of time being brutally underpowered. They buffed him awhile ago, though, and he rocketed up to being one of the most solid Warriors in the game. He doesn’t pump out a ton of damage, but his abilities give him a lot of control over the battlefield. He can grab a squishy opponent, suplex them, and punt them completely out of position to be picked off by his allies. A well-played Diablo is a beast. Of course, a poorly played Diablo will punt that squishy away from his allies, helping them escape. Don’t be that person. Don’t betray your teammates by throwing the enemy Morales to safety.