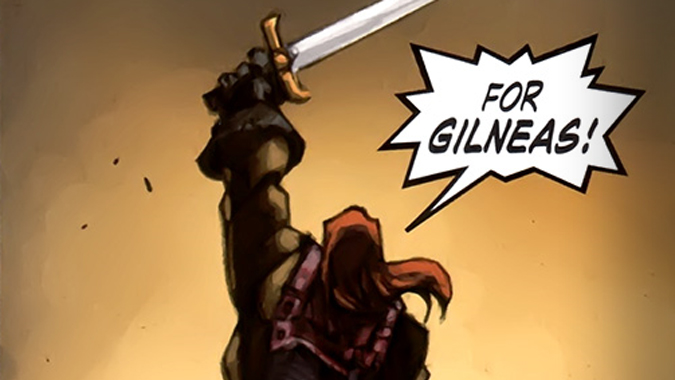 Lord Darius Crowley likely never meant to be a hero. If he’d had his way, he probably would have preferred a world in which he lived out his life on the lands he claimed as his own, caring for his people and his daughter Lorna. But the world had different plans for Darius Crowley, and his own sense of justice and overwhelming desire to see the world put right led to a life of rebellion, war, and ultimately, sacrifice.

Gilneas has a history far darker than any other human kingdom, largely because its troubles were self-inflicted. Beleaguered by the rise of the Scourge in the Third War, the kingdom chose to withdraw — a fatal decision with disastrous consequences for everyone in it. For Crowley, the future would be darker still, afflicted with a curse he didn’t ask for, shoved into a decision that would change his life, and the future of Gilneas, forever. 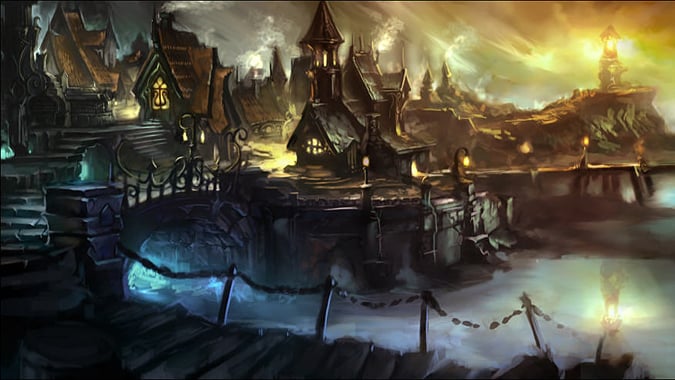 Lord Darius Crowley was the perfect picture of a Gilnean citizen, loyal, perhaps a little prideful, but nonetheless dedicated to his kingdom. He was the kind of man who drew both admiration and respect from the people who settled on his lands, as well as from King Genn Greymane. Crowley was among the Gilnean nobles who accompanied Greymane to Lordaeron after the First War, where he heard the tale of the Orcish invasion and Stormwind’s defeat.

But unlike Greymane, Lord Crowley was a far more sympathetic soul to the plight of Stormwind’s refugees. He encouraged Greymane to join the Alliance of Lordaeron and offer aid to the refugees — and while Greymane agreed, he only offered a small fraction of the support Gilneas could spare. It was the first indication that perhaps Greymane didn’t have the best interests of all his people in mind.

The second indication was far more abrupt, and held immediate consequences for Crowley. After the Second War, Greymane chose to secede from the Alliance of Lordaeron in dramatic fashion: by constructing a great wall that would physically seal Gilneas off from the rest of the world. Unfortunately, the Greymane Wall was set to be constructed right through Crowley’s lands — which meant that every loyal Gilnean on the other side of the wall, every citizen that lived on Crowley’s lands would be cut off, too. 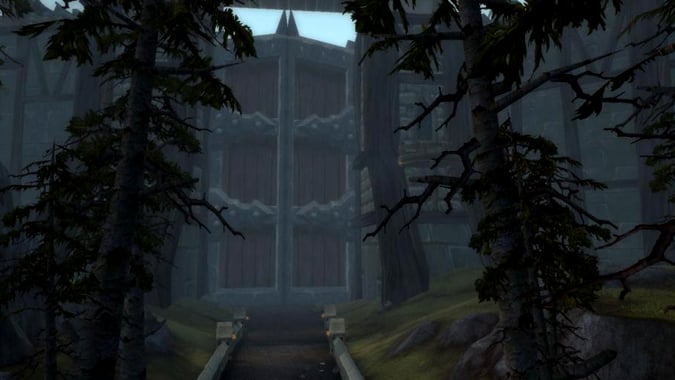 Not only this, but Crowley himself was coming into question because of his previous support of the Alliance. And Crowley was absolutely furious about all of it — the wall, the ridiculous withdrawal from the Alliance of Lordaeron, the callous abandonment of the people of Pyrewood Village and Ambermill. But the Greymane Wall was constructed as planned, and Crowley could only watch and seethe as Gilneas abandoned its people. He had himself, he had his beloved daughter Lorna, and he had the support of a growing number of people who were cautiously dissatisfied with what King Greymane had done.

And when the Third War arrived, Crowley suddenly had even more supporters. The Scourge ravaged the land and Lordaeron’s cries for aid went unanswered. Pyrewood Village and Ambermill were soon under fire and King Greymane turned to desperate measures to fight off the undead storming the Greymane Wall.  The result was the release of the Worgen — terrifying creatures who yes, turned the tide of the undead, but once the battle was over, turned on the Gilneans they were summoned to defend.

As far as Crowley was concerned, King Greymane had lost all leave of his senses, deliberately abandoning loyal citizens, and utilizing unstable, uncontrollable creatures of dark magic that did more damage to the Gilnean populace than good. And his beloved lands, Pyrewood Village and Ambermill were caught in the crossfire between undead and Worgen both. Crowley sent a platoon of his own men to assist the Alliance and Lady Jaina Proudmoore, unwilling to simply leave the rest of the world behind — and Greymane found out, promptly accusing Crowley of treason. 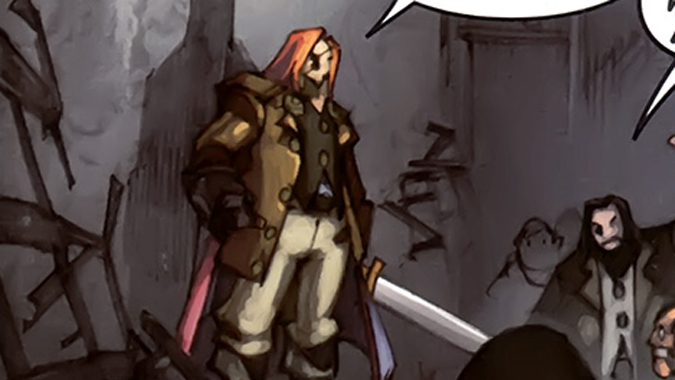 Enough was enough. Crowley pointed out that there was no reason to Greymane’s actions, and declared civil war. By this point, Crowley had enough supporters questioning the King’s actions that the entire kingdom was affected. All throughout Gilneas, civil war reigned, Northgate Rebels against Gilnean Loyalists. But Greymane perhaps underestimated the strength of Crowley’s allies, because the final battle was a direct assault against the capital city itself.

Crowley and his men marched against the city, armed with cannons and artillery, setting the capital ablaze. He wasn’t fighting for his lost lands, he was fighting for what was right — a cause that King Greymane seemed to have lost sight of. Crowley simply couldn’t understand how Greymane could be so callous and cold to people who were crying out for support and help, whether it be the Alliance, the now lost people of Pyrewood and Ambermill, or the Gilnean citizens who fought at his side.

Despite his fervor and the strength of his forces, they weren’t enough to overthrow King Greymane or his loyalists. Crowley was captured and imprisoned for treason, and the Northgate rebels went into hiding. Without their leader, the Northgate Rebellion was quashed, and the caches of weapons the rebels seeded throughout Gilneas City were abandoned. 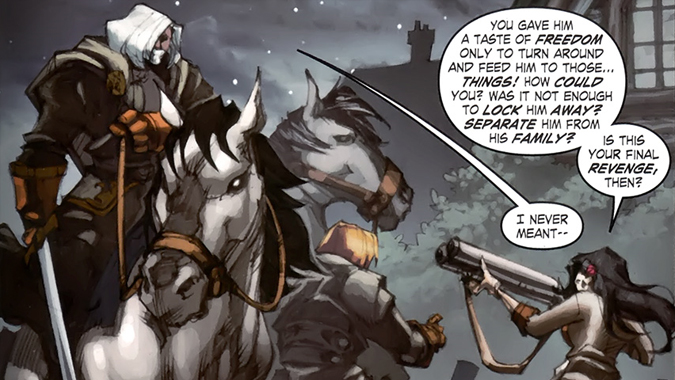 And perhaps that would have been the end of Crowley’s tale, although it’s unlikely. Because his daughter Lorna wasn’t about to let her father go so quickly. She stayed in Gilneas City, likely to try and find a way to get her father free, because she believed in the cause of the Northgate Rebellion just as strongly as he did. Unfortunately, we’ll never really know what Lorna had planned, because the situation shifted before she could do anything about it. The Worgen that King Greymane used to defend the Greymane Wall were now a menace that couldn’t be ignored or simply hunted down to extinction, and they were threatening to overwhelm Gilneas City.

Faced with overwhelming defeat, Greymane was forced to set Crowley free and ask for his help, and the help of the Northgate Rebels, against the Worgen invasion. For Crowley, the choice was simple. The citizens of Gilneas needed help. It was the right thing to do. He agreed to help Greymane, and took a group of soldiers to divert the Worgen’s attention from fleeing survivors, leading them on a chase that ended at Light’s Dawn Cathedral. Overwhelmed by Worgen forces but unwilling to stand down, Crowley was quickly overwhelmed and presumed dead.

Lorna was absolutely furious. To her, this was simply a matter of King Greymane taking advantage of the Worgen assault as a means to rid himself of her father and the Northgate Rebels for good. And if Genn’s son Liam hadn’t been there to restrain her, she may very well have shot and killed King Greymane — instead, she listened to Liam and discovered that her father had chosen to stay behind, chosen his fate, and chosen to die. Left with nothing, Lorna withdrew from Gilneas City to the Crowley Orchard to live out the rest of her life in solitude. 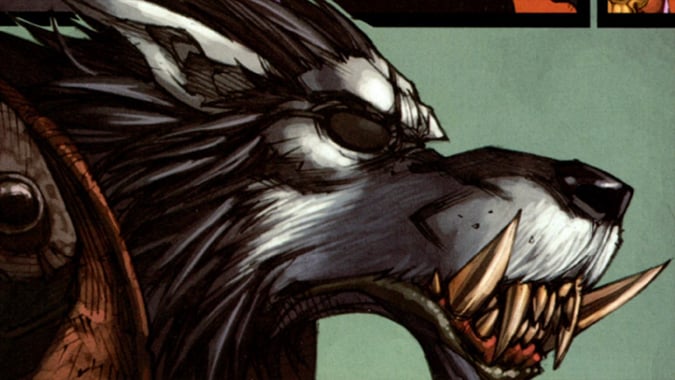 But Darius wasn’t dead. Like so many Gilnean citizens before him, he was afflicted with the Worgen curse. Ashamed of what he’d become and fearful that he would lose control, he didn’t try to find Lorna or tell her he was alive. After discovering the true nature of the Worgen curse, Darius worked with the Night Elf Belysra and others to retrieve the Scythe of Elune, an artifact that could potentially spread the curse of the Worgen even farther than it had already reached.

During this time, he was eventually convinced to reunite with his daughter, who was overjoyed to find he was still alive. And once again, he was reunited with Genn Greymane…and discovered that Greymane was afflicted with the curse as well. The two agreed to another alliance — this time, to combat the Forsaken, who had taken advantage of the Shattering and were attempting to take Gilneas for themselves. Together, they managed to halt the Forsaken armies long enough to allow the citizens of Gilneas to flee for Kalimdor — and while Greymane left with his people, Darius and Lorna stayed behind.

Together, they formed the Gilneas Liberation Front and sought to keep the Forsaken at bay. Lorna took over as commander and fought at the front lines, attacking the Forsaken Forward Command directly and earning the attention and ire of Sylvanas. Lorna was captured, but her bloodline saved her life — because she was Darius’ daughter, she wasn’t killed on sight. Instead, she was brought to the gates of Gilneas unharmed and presented to Darius Crowley, along with a choice.

That choice? Surrender, or see your daughter made Forsaken. Darius didn’t hesitate. He surrendered, took his daughter and fled back into Gilneas. 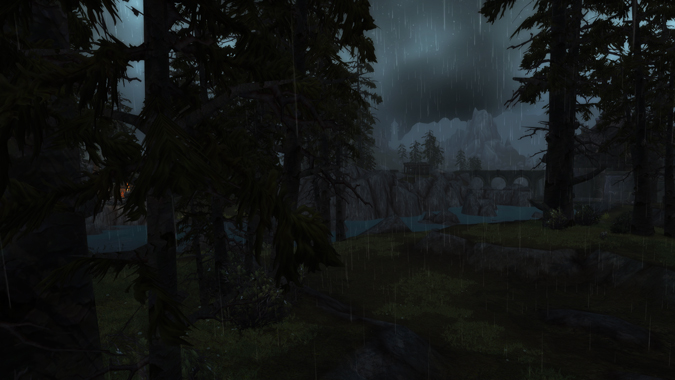 One might look at that and think Crowley a coward, or a fool, or any number of other unpleasant things — after all, he’d devoted years to fighting for Gilneas, and at a moment’s notice he abandoned it. But he wasn’t a fool, he was a father. Lorna was the only family he had left. And he wasn’t about to let any harm come to her, and certainly wasn’t about to let her become the enemy. Gilneas was his home, it was a cause he was willing to die for, as evidenced by his heroics in Light’s Dawn Cathedral…but it wasn’t a cause he was willing to let his daughter die for.

And at that point, really, what was left for Gilneas? The kingdom had been ravaged by civil war, by Worgen, by the Shattering, and now by Forsaken. Its own people had abandoned it. Its King had abandoned it. And perhaps in that moment, faced with the choice between family or kingdom, Crowley realized it was time he abandoned it too. The kingdom he fought so hard to protect was already gasping its last breaths, while his daughter was still whole and unharmed. One of these, he could save. The other, he could not.

No one knows what happened to the Crowleys after that. They disappeared into the wilds of Gilneas, and neither has been seen since. While we don’t know what happened to them, I like to think they’ve found someplace, somewhere in the wilds of Gilneas to hide, bide their time, and plan. Because while Darius might have been willing to hand over Gilneas for Lorna, I doubt she’d simply give up and walk away. And I don’t think she’d let her father do so, either. Instead, I like to think she’s acting as any commander would: treat the retreat as it was — a retreat — and take the lull in combat to regroup and come up with a new plan.

As for Darius…he now understands his weak point. And if he understands that, he can plan a way around it. A man who has spent the better part of his life fighting for a cause isn’t about to bow out of the picture so quickly — I expect we’ll see him again some day, fighting as valiantly as ever for what he believes in. After all, it’s the right thing to do.