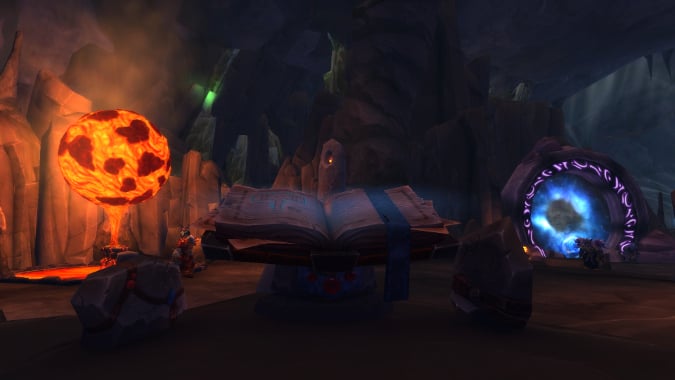 Last time we talked, I gushed about our new class order hall. The look, the feel, the ambiance all sing to me in a way that I did not expect it too. Everything just works, at least for me, in reinforcing that class fantasy of what it is to be a Shaman. Totems everywhere used in everyday application, even something as simple as using them for lighting instead of torches just fits nicely. It also helps that we have a cave that overlooks the Maelstrom and is in the area that was home to one of the most defining moments of Azeroth’s recent history in the felling of Deathwing.

One of the most interesting parts of what we have seen in the Class Halls so far, at least to me, is the choice of NPCs. For shaman, we took a few guesses as to why certain NPCs were present, and it looks like some of the surprise additions server a purpose beyond just being there for flavor.

If you are looking to avoid Legion spoilers, you won’t want to proceed any further. We’re going to be venturing into some spoiler filled territory here surrounding Legion‘s Restoration Shaman Artifact scenario.

Remember when I talked about the surprise with Erunak Stonespeaker showing up in the class hall? Remember how we haven’t seen him since Cataclysm, when we freed him from a little case of mind control? Well, it looks like good old Erunak has a renewed purpose in Legion, and it is one that is of central importance to Restoration Shaman in particular.

One of the first things that happens when you are brought to the Shaman class hall is that you fight back against the Burning Legion as they attempt to capitalize on the aftermath of the opening sequence of Legion. With the Earthen Ring shattered and weakened, those silly demons think they can take out what is left of the Shaman of Azeroth. Good thing we’re there to show them a thing or three.

After an epic battle and the channeling of a whole lot of shamanic might, the remaining Shaman band together and start to hash out plans to regain their strength in order to defend Azeroth. That’s where we, as the players and champions, come in. This is also where, at least at this point, we start the path to obtain our Artifact weapons.

Right now after everything is said and done you talk to Thrall and tell him which path you want to walk. If you tell him that you’re a master healer, he’ll tell you that Erunak has been seeking the item of power, a scepter wielded by Azshara herself, for a long time — and that he’s got a new lead from one of the Shaman under his tutelage. When you agree to accompany him, a few Shaman open up a mage-like portal made of water (Can we get this as a class spell please?) that leads to the watery realm where the scepter is said to be. 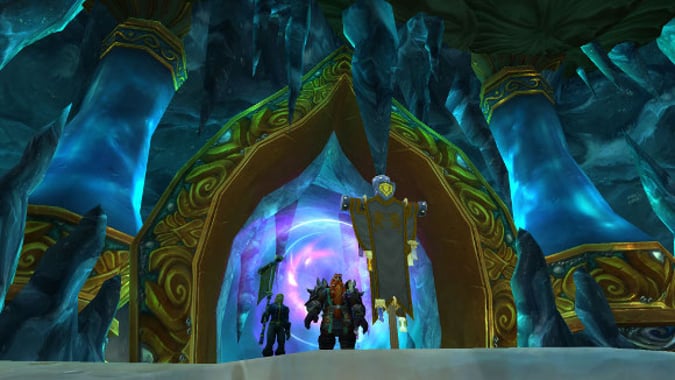 When you emerge from the portal, you find yourself in the entryway to the Abyssal Halls. If you spent anytime in dungeons during Cataclysm, you’ll immediately recognize the place as the Throne of Tides, the very same place where we rescued Erunak all the way back in Cataclysm. It could be that this is just a placeholder for the time being, as this is Alpha content, but if it’s intentional and stays in place, it’s a nod that I appreciate being there.

Your first encounter is rescuing a Sea Giant by the name Grash from invading Naga, who informs you that the scepter is indeed present and in the hands of a Naga Witch who’s using it to control the denizens of the sea. After a few rounds of dialogue you learn all you can and then you recruit Grash to your cause. Which is good, because you need him to break down the ice barriers that stand in your way.

You then stage a daring rescue of Adelee, a Pandaren Shaman that was captured while running down the lead on the scepter. You learn that the entire realm is a trap, but you move forward with your party anyway, having obtained its final member. There’s now you as a healer, Erunak as Elemental, Adelee as Enhancement, and Grash as your tank.

The four of you make your way through the realm, taking on a Naga Brute as big as Grash, and then up a very familiar elevator towards the center chamber for the final showdown with the agent of Azshara. Your job, of course, is to keep the party alive as best as you can. Once your party has killed off the witch, and Grash is done mutilating the corpse, you obtain the now newly named “Caduceus of Azshara”. You then head back to Storm’s Eye Overlook, and finish setting up the place with the rest of the remaining Shaman.

I’m sure the rename was to prevent confusion with the item from the Caverns of Time dungeon also named the Scepter of Azshara. My initial thoughts? It’s a well designed encounter, and it favors playing with AOE healing synergies quite a bit. It seems to encourage and reward taking talents that buff or give AOE healing advantages, and your party of NPCs just happen to stand close enough that you can get all of them under a Healing Rain and bounce Chain Heal to them all. 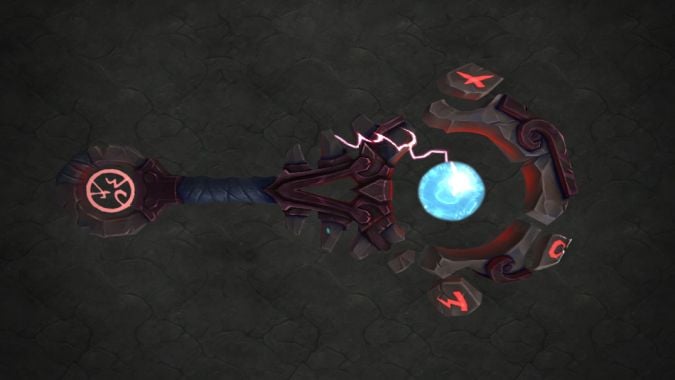 Overall it looks like a nice encounter, where a lot of thought has gone into how it’s put together and how the player will navigate through it. It’s also interesting that the scenario appears to be balanced around group healing when we’ve been repeatedly told that we were going to be pulled from our niche, but that seems to happen every expansion.

One thing I think is interesting is how differently people in the alpha are finding the encounter. Some players are breezing through it with little to no trouble, and others are struggling. I’m not sure how much of that is the encounter or the players, as right now all players have the same gear on their newly created characters.

There’s a decent amount of story, though I wonder if there’s going to be some more snippets of lore thrown in later to help learn about how the scepter was unearthed, or how the Naga got their hands on it. That said, this is the alpha so I expect things to evolve and change quite a bit before it reaches live. Overall though, I’m happy to see story driven scenarios that serve an in game purpose, as well as very obvious thought going into single player healer content. It’s a nice change of pace, and something I hope we’ll maybe see a bit more of. As someone who has been very intrigued by the idea of healers being able to quest and solo while leveling in Legion, this appears to be going down the right path so far.