The Queue: Nightmares are red 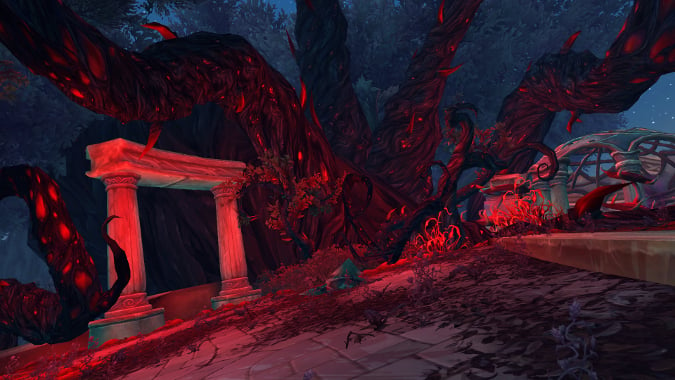 Legion wardrobe question (that may actually have an answer already, even though I know it’s subject to change):

When a person adds an item to their wardrobe, what happens to the actual item? Is it “used” and destroyed? Does it become soulbound if it isn’t already, to prevent trading one item around to give everyone the look? Is the item vendorable?

Generally speaking, a person does not add an item to their wardrobe as an active thing — it just happens. If you get a BOE item of your armor type and equip it, thus making it soulbound, the item’s model goes into your wardrobe. When you complete a quest, all of the possible rewards of your armor type are added to the wardrobe, not just the one you picked. When you buy an item and it becomes soulbound, it is added to your wardrobe. If it’s an item you’d be able to return for a full refund within two hours, it will only stay in your wardrobe if you keep that item past the point of no refund.

I am a longtime Mac user, disappointed that Overwatch is not coming for us.  That being said, I do have PC’s for accounting etc, and was considering buying it anyways.  What I would like to know, if i get Origins, will the bonus items be available on my Mac client for the rest of the Blizzard games that i intend to continue to play on OSX?

I don’t see why not. Everything gets added to your Battle.net account rather than, for example, your Windows installation. As long as you’re using the same Battle.net account in your PC and your Mac, you should have access to all of those goodies.

Is Blizzardwatch heading towards a time when the web site will only be links to videos and podcasts?  Or will there always be the sort of in-depth articles that were published in the past?  The dungeon/raid overviews, class guides and achievement guides have always been my favorites.  Rossi’s whole series back on the old site was amazing.  It would be great to see something similar –  not necessarily linked to an item but short stories.  Anyway, thanks for an amazing year of content!

We aren’t going to stop writing. We do video content when it makes sense. If you look through our content, we’re still doing class guides and whatever else. None of that has changed. However, the series you’re referring to, I think, are the adventures of Throgg and Lolegolas, yes? Those weren’t written by Mr. Rossi, but rather by Michael Gray, who is no longer a member of our editorial team.

Video lets us do content we couldn’t otherwise produce in text. We can write dungeon guides when the dungeons are complete, but our livestream dungeon runs allow people to watch the dungeons as they are now. Our leveling streams are us having a laugh as a group. That isn’t content which can be written.

Not sure how many Alpha players are here in the Queue, but any thoughts on how the Warcraft story is looking is Legion? Right off the bat in WoD I think many of us were scratching our heads with the whole alternate universe thing… So does Legion questing seem to set up an epic story that ties in well with the existing Warcraft narrative? From what little I’ve heard and seen, I think it will…

Currently, I’m not sure you can actually complete any of the zones. There seems to be something broken at a crucial point in every single of them. With that in mind, and also keeping in mind anything which happens on the Broken Shore is also not yet implemented, I’m not feeling any overarching narrative. There are surprisingly few demons in Stormheim and Highmountain — when there’s a Burning Legion presence, it’s often some new group pledging allegiance to the Burning Legion rather than encountering actual demons. The Burning Legion feels like an excuse to meet new people/visit new places more than an actual antagonist. Val’Sharah has demons, but they’re Xavius and the satyrs. Encountering them doesn’t feel Legion-y. It’s Emerald Nightmare stuff.

That said, I’ve really enjoyed the content I’ve done. Even if the Burning Legion wasn’t involved whatsoever, I think I’d still enjoy exploring the Broken Isles and interacting with these characters — both the new ones and the returning characters. Certainly, I don’t currently feel like this is the largest Burning Legion invasion ever or a particularly destructive incursion. When bugs are fixed and all of the missing content is implemented, maybe I’ll feel differently.

I want to be clear: I enjoy the story and gameplay of Highmountain, Stormheim, and so forth. It’s good stuff. But they all seem self-contained and only tangentially related to any sort of invasion. The Legion invasion is the reason we’re there, but once we’re there, they’re mentioned more often than they’re seen.