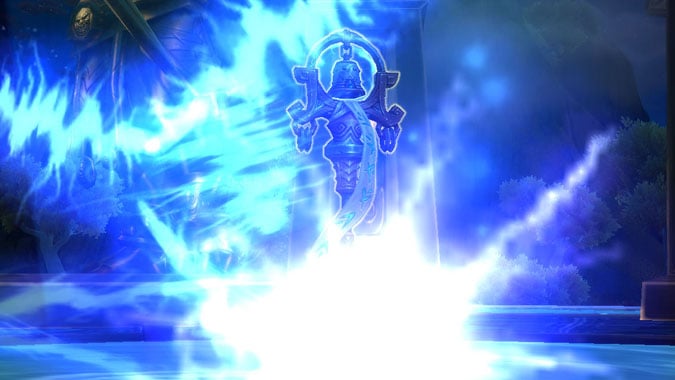 Obvious spoiler warning goes right here — if you don’t want to know what happens to Mistweaver Monks in Legion, I don’t recommend reading this post.

That said, tonight I took some time to really play a bit of my Mistweaver on alpha. Now, I don’t heal very much anymore — I used to heal pretty often, but I’ve become far more used to live Mistweaver. Swapping for this quest was interesting, as the healing style has changed greatly from what we’re used to on live. But we’re not talking about gameplay here — below the fold you’ll find a plethora of screenshots to preview the current Mistweaver Artifact questline!

The quest begins at the tail end of the Burning Legion deciding that it’d be a fantastic idea to invade and completely trash the Peak of Serenity (which all Monks will see, regardless of which artifact they opt to pursue). At the end, we and our Pandaren allies establish the Monk class order hall back on the Wandering Isles.

Following the intro, we are asked what we’d like to pursue. Of course, being the Mistweavers we are, why would we select any weapon other than Sheilun, the very same weapon which Emperor Shaohao is said to have once wielded? 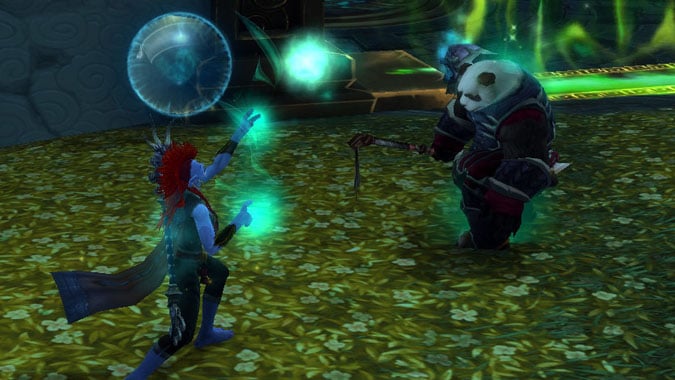 Following accepting the quest, your ride, Tik-tak the Hozen, will fly you to Terrace of the Endless Spring. It seems that corruption has entered the Terrace and Taran Zhu has gone ahead of us. But when we arrive,  he’s been seriously injured — we must use our healing arts to invigorate him so that we can accompany him in cleansing the Terrace. 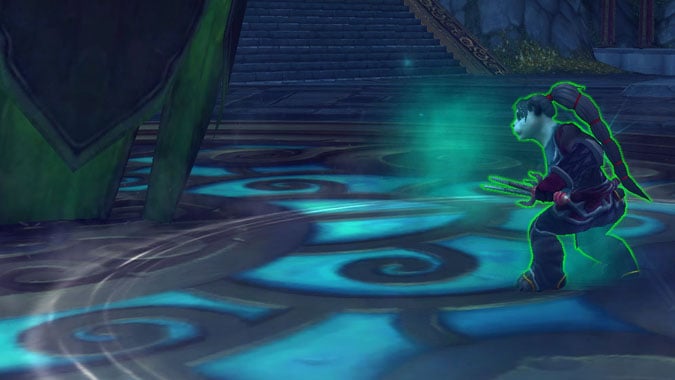 Once you’ve topped him off a bit, he’ll bring you to where more Pandaren allies have been imprisoned by demons — it’s up to us to defeat these demons and free our friends. That makes things a bit tricky because hordes of felhounds will make life difficult by attacking you while you’re trying to unlock these tricky cages. Regardless, a quick Leg Sweep can allow you to at least open the first cage … and maybe we will recognize this familiar face that we’ve set free? 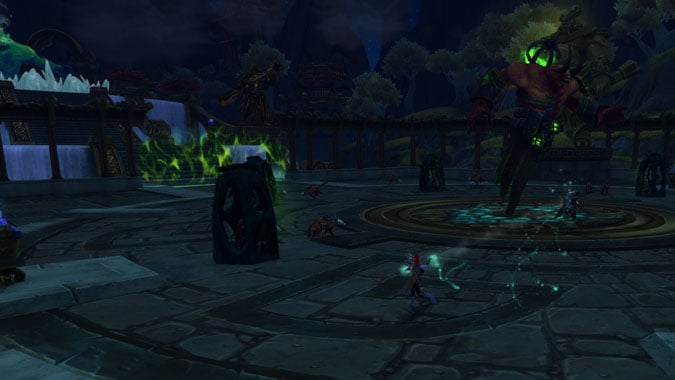 Regardless, it’s easy to get overwhelmed by demons and must work to keep our party alive to defeat them. The first fight is not too difficult, though the felhounds can continue to be a problem.

You’ll want to stay quick on your feet while trying to keep your allies healed. You can help with damage a bit through Rising Sun Kick, Tiger Palm, and Blackout Kick, but you have to be careful to not rip threat off of Taran Zhu. 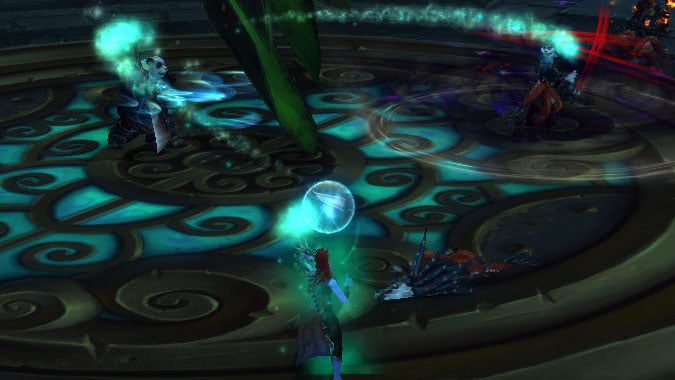 In terms of keeping his health up, using Enveloping Mist while running around channeling Soothing Mist (with the Mist Wrap talent) makes life pretty easy. And if you really want a light show, Essence Font has quite the animation. 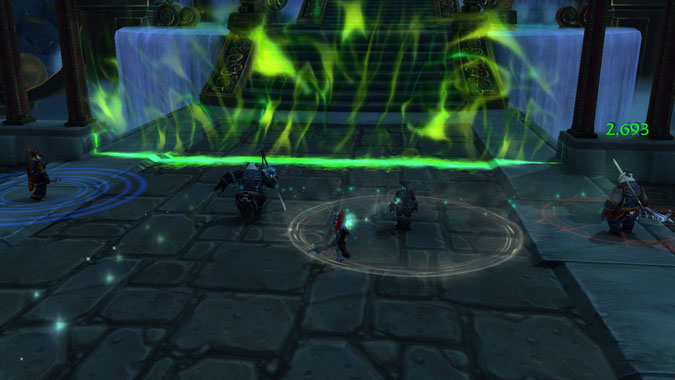 Once that’s down, we can finally regroup, organizing our makeshift party by instructing everyone on what you want them to do. Do you want them to deal lots of damage, or would you prefer it if they played a bit more conservatively and tried to avoid damage instead? If only raid leading were this easy — of course you want them to avoid damage! You’re single-healing this, and the default Mistweavers on alpha aren’t exactly in Mythic gear. 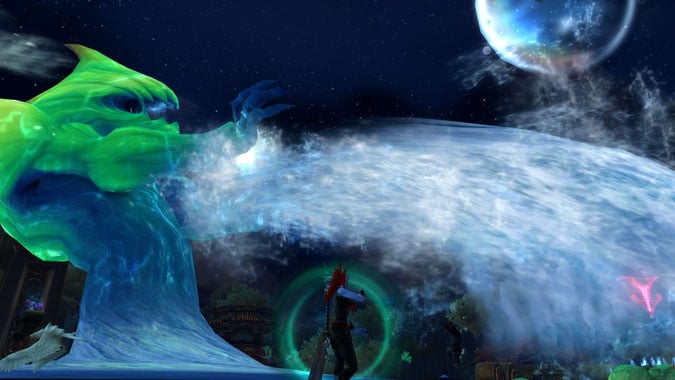 Moving on, we find that the waters have become corrupted yet again. In very place which we fought the Sha of Fear, we must fight this new evil that threatens the Terrace of the Endless Spring. This seems to be the big brother of Immersius, with a similar model (though he seems to have had a bit more Baja Blast than his Siege of Orgrimmar counterpart) and using most of the same abilities.

Unfortunately, this fight becomes relatively long and arduous. Keeping your allies topped off while not being overrun by slime adds (Terran Zhu is terrible at holding aggro) or in being hit by water twisters in the final phase is a real challenge. On top of that, the boss occasionally traps members of your party in a water bubble, causing them to float away — you have to cast Detox to get them back on the ground to help you take the boss down. 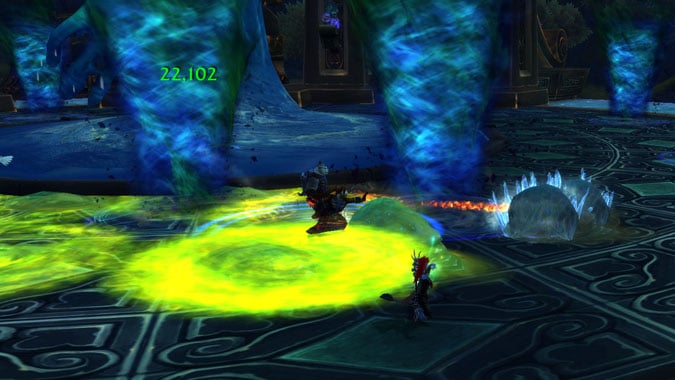 While your allies can’t die, if their health gets low they’ll stop fighting and stand there in a daze until you heal them up — meaning less damage and an even longer fight. Telling them to fight more conservatively rather than maximizing DPS will help, but they’ll still need healing (and dispelling). Don’t we wish we could tell That Guy on our raid team to do the same? Still, they will occasionally take damage, and toward the end things can become very hectic.

You likely won’t have time to help with damage at all here — there were many times that I encountered Taran Zhu and Taoshi both either dying or being carried into the heavens by the Water Bauble. Diffuse Magic likely saved my neck here — because between avoiding adds, dodging tornadoes, casting dispels, and actually healing, I hardly had any “me” time. 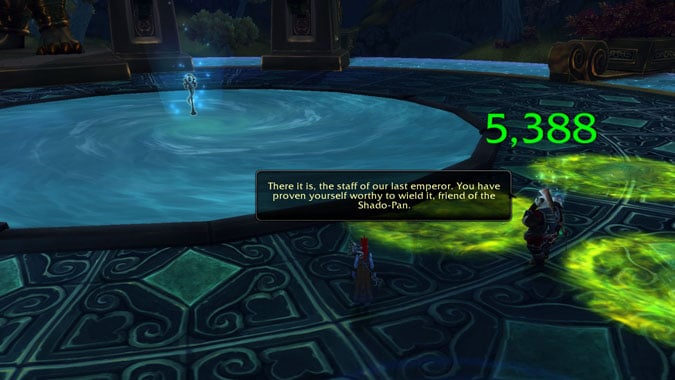 Taran Zhu really isn’t lying. By the time this fight ends you will likely be blue in the face trying to keep your allies up — at least at with the ilvl 60 template characters in the Legion alpha. But now you can grasp Sheilun, Staff of the Mists! 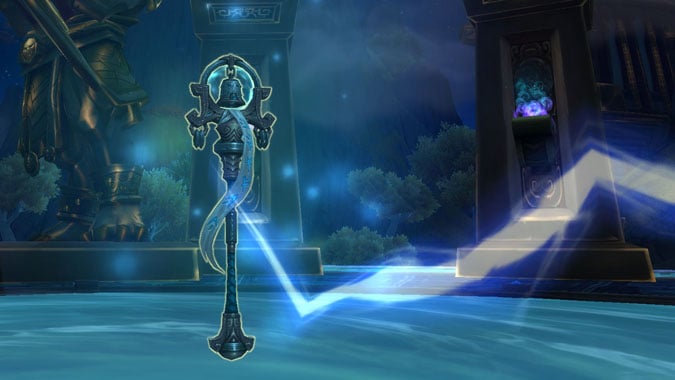 Which, thanks to first person mode, and a trinket deciding it should proc, made quite the dramatic entrance. 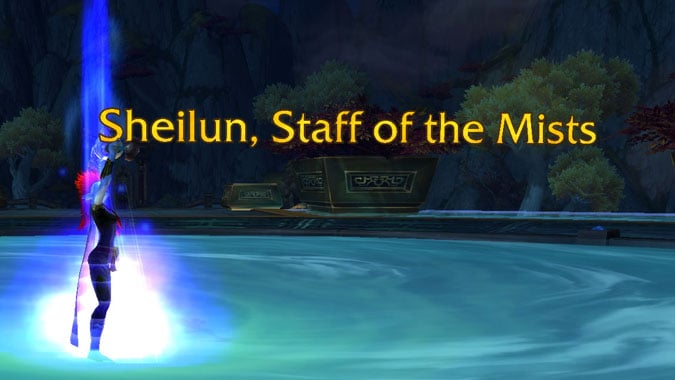 Lastly, we’re graced with the cutscene of our character wielding the weapon in question. Because we’ve just picked up a truly incredible weapon (and we’re kind of exhausted from the fight), we’ll forgive it for being so incredibly reminiscent of garrison cutscenes. (Because who honestly wants to be reminded of those? Other than maybe the large amounts of gold they can produce…)

Now it’s time to return to the temple, where you’ll pick up your very first artifact ability: Sheilun’s Gift. Now it’s time to head out into the Broken Isles and get healing!