Someone has to be last to be worked on, and apparently Destruction is it for Legion alpha. Affliction and Demonology are still receiving changes to their artifact traits, and especially to their Soul Shard random regeneration talents, but as I need to reroll my Warlocks to experience some new class hall content, I don’t have much to share with that just yet.

Before another build with a lack of Destruction dropped, there was an earlier blue post from Watcher that hit on a more general Warlock topic: Demonic Circle and its place in the Warlock spellbook.

Originally Posted by Watcher (Official Post)
Though it still exists as a talent, Demonic Portal is actually an example of removing weaknesses in a way that harms class differentiation. Going back to BC, one of the core differences between the two pure offensive casters, warlock and mage, was that warlocks were far more durable and “tanky,” while mages were frail but had more mobility and escape tools (Nova+Blink being central to that). Giving an instant teleport/escape ability like Demonic Portal to warlocks did a great deal to blur that distinction, and the class’s design might have gone in a quite different direction without it.

While Watcher is right that a core differentiation from Mages is that Warlocks are supposed to be “tankier,” I think he’s wrong about Demonic Circle weakening Warlocks because, unfortunately for more nostalgic arguments, we’re not in the endgame environment of The Burning Crusade anymore.

I think a performance against Prince Keleseth is a better argument for what makes a Warlock resilient to damage taken than The Burning Crusade’s favorite Warlock tanking reference Leotheras. For Keleseth, we were the tankiest DPS class that could hit most of the Shadow clouds in the room without running around all the time, and the Shadow clouds helped you survive Keleseth’s attacks. We had spells like Demon Armor to boost our overall armor mitigation and self-healing, and we also had Shadow Ward, which absorbed an amount of Shadow damage on a short cooldown. Warlocks survived tanking Prince Keleseth mostly because our abilities matched up best to help us absorb and heal back what Keleseth threw at us. 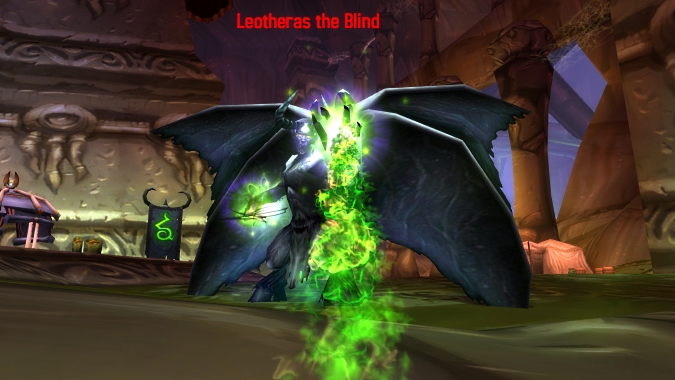 Leotheras, on the other hand, is a different boss when it came to tanking strategy as a Warlock. First, Warlocks tanked Leotheras for a similar reason to Keleseth — we’re ranged, and we’re the tankiest of the ranged. In this case, “tankiest” doesn’t just mean a lot of stamina and spell resistance because we got that mostly from a special Fire Resistance gearset and very specific talent setup. It would have been up in the air between a Mage with Fire Ward and a Warlock with a Fire Resistance set were it not for the threat-generating ability Warlocks had, Searing Pain. Leotheras had an AoE attack that would hit the melee if a normal melee tank were tanking him, so because Leotheras is standing casting at a faraway Warlock, the melee are safe and free to hit him.

Warlocks tanked Leotheras in The Burning Crusade largely because we could hold threat against the melee DPS, not so much because we could best survive attacks, since in that fight a Mage could do that if not better with their own abilities outside a special gearset. Against Keleseth, on the other hand, we were using more of our “tanky” abilities that involved our self-healing, absorption, and sheer health pool. 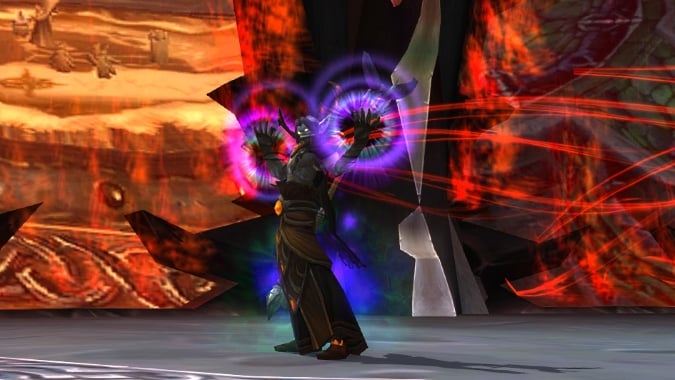 Why are we talking about Warlock tanks when we’re talking about a movement ability? As good DPS know, movement is an avoidant form of survival. Tanks completely avoid damage by dodging or parrying. DPS maneuver around taking damage by mitigation spells that reduce damage taken, by healing back what was lost, or by avoiding it completely by not being in the vicinity of voidzones.

Raids are not only more complicated today, but faster in damage dealing. A Warlock’s ability to absorb big hits and heal them back doesn’t matter if the damage coming out is so big it’ll one-shot you unless you avoid or heavily mitigate it. Today’s raid environment focuses less on gear and passive skills protecting you and more on active abilities protecting you, whether we’re talking about a healing cooldown, active mitigation, or a personal immunity spell. Movement fits into that ability category of protection especially for Warlocks, because while we would love to stand still and cast, the challenge as ranged DPS in raids is coping with movement. 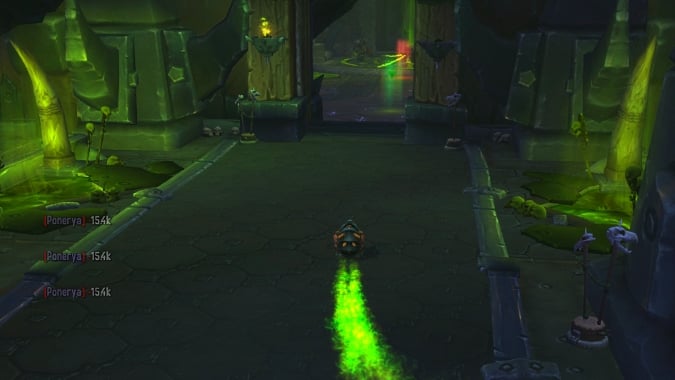 Blink, Disengage, and other movement abilities like our own Burning Rush are largely reactive movement abilities: some void zone starts to come at you, and you Blink away. While you can use Blink to get somewhere specific on purpose, in raid environments Blink and movement like it is something you do largely in reaction to your immediate situation.

Demonic Circle, on the other hand, is proactive movement. You have to set it down first before using it. I actually argue that Demonic Circle is very different from Blink because it’s a unique skill that’s often best used in PvE as an offensive movement ability rather than as a defensive escape ability. I argue that it fits Warlock fantasy just as well as Burning Rush does, since we’re cunning bastards with grandiose plans.

A current PvE example of using Demonic Circle offensively is Kilrogg in Hellfire Citadel. There’s a solid defensive choice to put my Circle down at the back of the room, so I can get out of the raid quickly for the Heart Seeker projectile. Or, since the mechanic allows enough time for running, I can run back, and use my Demonic Circle offensively to teleport back quickly so I can start attacking again. The Circle up front also helps you switch sides easily, so instead of running across the room with the group doing minimal damage, you can continue attacking Bloodthirsters or Terrors and then teleport back safely once the Heart Seeker has gone through. Personally, I put my Circle on the opposite side as my Demonic Gateway, so I’m using one trick or another to get back to the fight no matter which side I’m on. 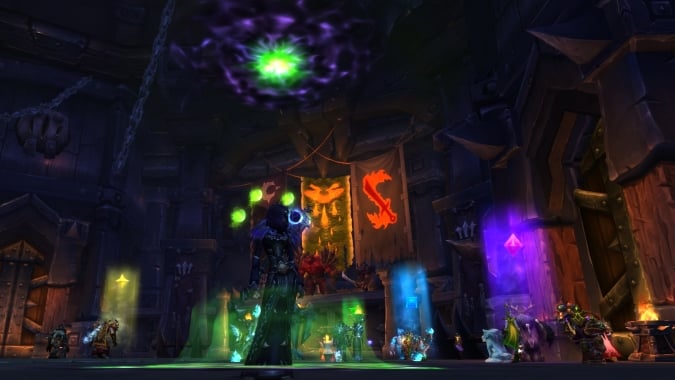 Demonic Circle also largely breaks down as a defensive escape tool in current raids. Back up a boss to Hellfire Council, and let’s talk about how Reap counters Demonic Circle. You can’t teleport out and stack voidzones in the same spot, because while you have absorb and immunity abilities, you’re probably going to save those for the other hard-hitting debuffs of the encounter like Mark of the Necromancer or Bloodboil. Demonic Circle as an escape ability is largely so you can get a head start on getting to the back of the room. You drop your Circle somewhere out in space in range of your stack up pile and just rather hope that no one drops a Reap circle on it in their lagged reaction to get out. Blink, on the other hand, is aimable every time you use it which means if you run into a voidzone with it, it’s 100% your fault.

Demonic Circle is an escape ability, but only if the rest of your team respects your teleport location and doesn’t turn it into a voidzone itself. Or, in the case of PvP, your enemy doesn’t notice the floating, glowing green marker and wait there to kill you. Blink, by contrast, is nearly impossible to guard against, unless you have the ability to generate terrain elevation changes or walls in the Mage’s path.

Burning Rush isn’t much of an evasive help either, as someone who’s had many damaging debuffs knows: draining your health while attempting to get out will more likely help kill you rather than help you survive. Burning Rush turns what would be simple evasion for everyone else into a net loss for the Warlock because it actually helps contribute to our imminent death.

As long as I’m getting Flash Healed to full and two-shot to death, Demonic Circle and Dark Bargain will always beat out Siphon Life and Sacrificial Pact when it comes to not taking damage. However, if health pools and periodic self-healing start to matter again, then Warlock tankiness will be a different class strength against Mage-like evasion. Demonic Circle is also a unique part of a Warlock’s offensive toolkit and shouldn’t be phased out of our spellbook just because it can also be used as an escape spell like Blink.

A weakness to my argument is not taking into account Affliction’s Soulburn effect of Demonic Circle: Teleport, which gets baked into the Legion one-button talent version, opening up the snare/roots immunity from Affliction-only to all Warlocks. However, if this effect is what makes us too slippery like Mages, then I’d rather lose the slippery immunity effect over losing the entire teleport ability.