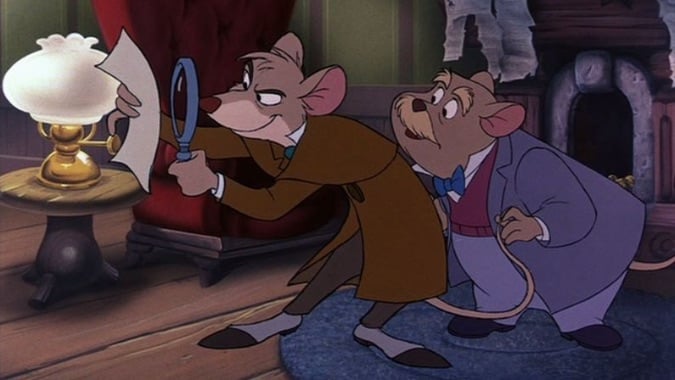 Welcome, one and all, to another Disney Queue, where we will talk about the greatest Disney hero of all time: Basil of Baker Street.

Drakkenfyre asked:
What is the most underrated animated Disney movie of all time, and why is it Atlantis?

Is it because it starred Michael J. Fox? Not to mention Jim Varney (in his last role, ever.) That it was based on real-life mythology more than folklore or written fairytales? That it had the absolute balls to show hundreds of people getting killed? That it had gorgeous CGI blended with animation? That it was one of the only Disney moves to not have a single song or dance routine? (Not that there’s anything wrong with that.) That it just oozed Jules Vern out of every pore, including the storyline and technological designs?

All my adoration for Michael J. Fox aside, I’ve got to say The Great Mouse Detective. If you aren’t familiar with this fine work of meta-fiction, it’s about a pair of mice, Basil of Baker Street and his constant companion Dr. David Q. Dawson. The duo live at 221B Baker Street with their larger and better known detectives Sherlock Holmes and Dr. John H. Watson.

This is a zany mystery story with none other than Vincent Price as the villainous Professor Ratigan — and there’s just no topping that. (It wasn’t quite Price’s only Disney role, though: he originally provided the voice of the Ghost Host for Disneyland Paris’ Haunted Mansion ride.)

This is a simply bizarre piece of Sherlock Holmes meta-fiction, full of references to Holmes canon that are purely for Holmes fans. For example, “Basil” is a reference to Basil Rathbone, who played Holmes in 14 films from 1939 and 1946, and the voice of the human Holmes is Basil Rathbone himself, sampled from his Holmes performances.

It also featured an example of very early CGI/hand-drawn animation hybridization. For a scene taking place inside a clock, gears and other pieces of scenery were generated inside a computer, which then drew them on to a piece of animation paper to be combined with hand-drawn figures. Unlike the video above claims, it actually wasn’t the first Disney film to use CGI — that was The Black Cauldron — but it certainly used it to great effect. And, wow, computer graphics have come a long way since 1986, haven’t they?

Poor Basil has primarily been forgotten because the film was followed by a trail of even better movies: Who Framed Roger Rabbit, The Little Mermaid, and you can fill in the rest of the Disney Renaissance from there.

hordeoralliancewtf asked:
How do you feel about the shift from traditional 2D animation in Disney films to 3D? I admit, I haven’t really seen anything of their newer 3D stuff beyond Tangled and bits and pieces of Brave, but it just doesn’t quite catch my attention nearly as much as their 2D films. Maybe it’s simply nostalgia on my part for a different era, as I was a kid back when The Little Mermaid, Aladdin, and Beauty and the Beast were huge, but maybe not.

Frankly, I find the development of animation technology to be completely fascinating — and so did Walt Disney, who tried to push the technological envelope with every piece of animation he made. While I am a fan of the fluidity of hand-drawn style, I don’t think using computers necessarily makes or breaks a movie. Going back to The Great Mouse Detective, the sequence with Basil and Ratigan chasing one another through the gears of a clock wouldn’t have been possible as it was done without the help of computers. (Well, okay, it probably would have been possible… but it would have taken so much time that it likely wouldn’t have been made.) It’s an amazing scene not because it was made with computers, but because computers made it possible for a human creative team to tell a story in a new, visually striking way.

Think, too, of the ballroom scene in Beauty and the Beast. It looks ridiculously dated now, but in 1991 it was incredible, adding a sense of scale and detail that you wouldn’t have with traditional animation techniques. Using technology to further the story your telling can make better stories. But shiny computer graphics can’t make a good story by themselves — a good movie still needs a talented team of writers, animators, and more to work.

Not all of Disney’s 3D animated films are great. Not all of Disney’s hand-drawn films are great. Neither of these things is the fault of the medium — sometimes a movie just doesn’t work out. If you want to give 3D a chance, I’d recommend Wreck-It Ralph (which lost the 2013 Oscar for Best Animated Feature to Brave — highway robbery, I say), Big Hero 6, and the new Zootopia.  They’re good stories, and they’d be good stories even if they were made with hand-drawn animation.

And to look at it from another angle…

Mummrah asked:
Beauty and the Beast, best ever?  Talking about the traditionally animated stuff not the (awesome) PIxar stuff that Disney now owns.

I could only put Aladdin and Lion King in the same area. Maybe Little Mermaid. I’m probably showing my age considering these 4 all came out within a certain time window. I don’t care. Love me some Beauty and the Beast.

Hey, it’s called the Disney Renaissance for a reason. Disney’s had its ups and downs, and in the 80s they were definitely in a “down.” Let’s do a (non-comprehensive) review of their animation timeline:

And then Walt Disney died in 1966. And then Roy Disney died in 1971. That didn’t mean the end of the company (as you all know!) but there was certainly a question left hanging in the air: could Disney keep making great movies without, well, Disney? The company kept making movies and, certainly, made many good ones — but they didn’t live up to early successes. In 1979, long-time animator Don Bluth left Disney to start a rival studio, taking 18 animators with him, and giving Disney serious competition throughout the 80s. At that point, the parks were making 70% of the company’s money and it seemed like Disney animation might be over. There was even a hostile takeover attempt as financiers looked to turn a profit by breaking up the company and selling pieces off to the highest bidder.

But none of that happened.

Have movies since then not been as great? Well… to an extent, I think we can say that they haven’t. While certainly not every post-Renaissance movie is a bad one (I’m a huge fan of Lilo and Stitch, which falls in this period), Disney certainly fell into a slump. The company’s movies met with limited acclaim while DreamWorks swept in with its successful computer-animated Shrek.

Right now we’re in what they’re calling the “Revival” era with Pixar’s John Lasseter running the company’s animation division. That’s how we got The Princess and the Frog after Eisner intended to shut down traditional animation entirely—

Okay, no, I said I wasn’t talking about Michael Eisner.

The point I’m trying to make is that there’s no single golden era for Disney. The Renaissance was fantastic, but those weren’t Disney’s last great films, either.

Philster asked:
We’ve probably all heard about the animator legends behind Disney movies. Do you have any particular favorite animator stories or just have a particular fondness for one creator in particular? Why?

Ub Iwerks. You probably haven’t even heard of him.

Okay, I’m being sarcastic here, but many Disney fans probably have no idea who Iwerks is. He worked with Walt to create Oswald the Lucky Rabbit and, later, Mickey Mouse. He’s almost solely responsible for some of the best known early cartoons like Steamboat Willie and The Skeleton Dance. But he and Walt had a falling out, meaning Iwerks wasn’t there when the company hit its stride with feature films.

But would there even be a Disney today without Iwerks? It’s hard to say.

Jenjabenja asked:
Are the, uh, racist cartoons worth tracking down and viewing as a window into the past? Is there a “blacklist” at Disney for those which must never be made available?

I assume we’re talking about Song of the South here because this question is always about Song of the South. And, in fairness, that’s because Song of the South is a particularly bizarre case. The 1946 film blends live action and animation as Uncle Remus tells young Johnny stories (in live action) about Br’er Rabbit (in animation). It features the now-classic Disney tune “Zip-a-Dee-Doo-Dah” and hundreds of animatronics tell the story of Br’er Rabbit at Splash Mountain in Disney parks. The whole thing sounds charming, right? And it is. But… it also presents a pretty sanitized look at slavery, because Remus is a black man working on the Georgia plantation that Johnny’s family owns.

Disney has held that the film is set after the Civil War, but it’s been controversial since it was released… and today, it’s an interesting piece of history. James Baskett, who played Remus, didn’t attend the film’s Atlanta premiere because Atlanta was racially segregated — but he later became the first black man to win an Oscar for his performance in Song of the South. So is the film a step forward or a step backwards for diversity? The answer is really both.

Is it worth watching? This was Disney’s first feature-length film that mixed live-action and animation, and the company pulled it off beautifully. Just considering the technology, it’s a triumph. But the racial overtones are troubling — and somewhat uncomfortable to watch — from a modern perspective. Disney has kept it under lock and key since 1986 (though you can find more recent releases outside the US) and in 2010 Disney CEO Robert Iger called it “fairly offensive” and said there were no plans to re-release it.

Personally, I’d read up on the history and then go see Zootopia.

That’s it for this Disney Queue! Please let us know in the comments if there’s anything you’d like to see us talk about in next week’s Tavern Queue and we’ll be back to answer more of your questions soon.

Blizzard Watch is made possible by people like you.
Please consider supporting our Patreon!
Filed Under: Disney, Disney Animation, Tavern Queue
Advertisement