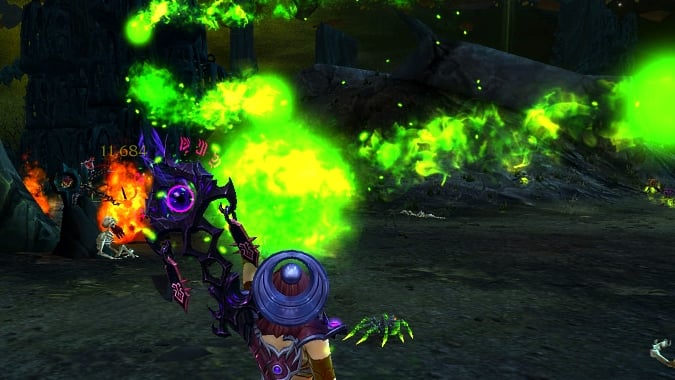 Although I’ve been severely delayed to level 110 by various bugged quests and server instability, I’m catching up to progress again on the Warlock class order campaign. Recently, Celestalon posted on the forums on overall class talent design in Legion, and for Destruction there was a talent swap between two tiers that represents some cool interaction between talents that can be had in the absence of themed talent rows. There’s also a thorn in our talents that comes up regularly when Warlocks are asked about how they like their talents, and I think it’s a little relevant to talent meaningfulness.

Being a class of all ranged, caster DPS specs, Warlocks have some similar talent rows across the two specs. Level 45 is the level of crowd control, Level 75 is the move-or-don’t row, and Level 90 is a choice between Grimoire pets. These rows are fairly independent of the other rows, so what you are doing with them matters more than what other talents you picked. The other rows specialize the kit even further, usually into the categories of single target versus AoE. This is where things can get blurry and interesting, provided Blizzard arranges the talent rows correctly, because these talents can mix with each other across the rows to form potent combinations.

Despite Blizzard’s best intentions to mix things up between talent rows, the class-shared rows definitely have a common row theme. Unless Blizzard decides to swing the sledgehammer completely back in the direction of spec-specific pets and crowd control (example: in Wrath of the Lich King, Shadowfury used to be just a Destruction thing), these class-shared talents have to be generic enough to accommodate all three specializations.

In the other direction of the sledgehammer, where talents are wholly spec-specific, those generalized talents would fracture into the three specs. For example, pet customization is one of the biggest characterization impacts on Warlock players, so I’m sure there would be uproar if any Grimoire was restricted to a single spec, though that might change with the current Supremacy demons becoming demon skins via the revamped cosmetic glyph system. 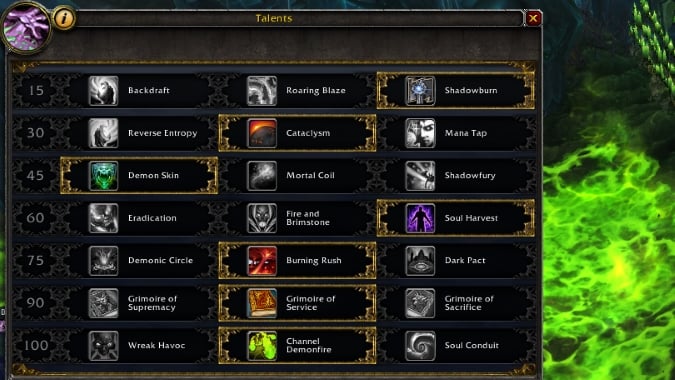 A recent build changed up Soul Harvest for all Warlock specs. Instead of its previous Legion incarnation of generating a full complement of five Soul Shards, a form of Dark Soul has returned, for Soul Harvest is now a flat damage increase for at least 10 seconds. The duration linearly increases by 2-20 seconds with 1-10 targets that you have a specialized DoT on: Agony for Affliction, Doom for Demonology, and Immolate for Destruction.

Affliction is already primed to be spreading Agony around, as prolific application generates more Soul Shards. Seed of Corruption, Affliction’s AoE spell, unfortunately applies Corruption instead of Agony, but Agony’s instant cast is fairly easy to multidot with. Demonology is a little bit in the same boat as Affliction, where Doom is easily multidotted across several targets, even without the Hand of Doom talent that shares the same row with Soul Harvest.

However, Destruction had a bit of a problem. Immolate can be easily spread between two targets with the Destruction baseline ability Havoc, but it’s not easily spreadable and maintain to more targets beyond that, at least not as easily as Affliction and Demonology can do it. Cataclysm is a Destruction talent that spreads Immolate to everything it hits in its area of effect, but it was sharing the same row with Soul Harvest. 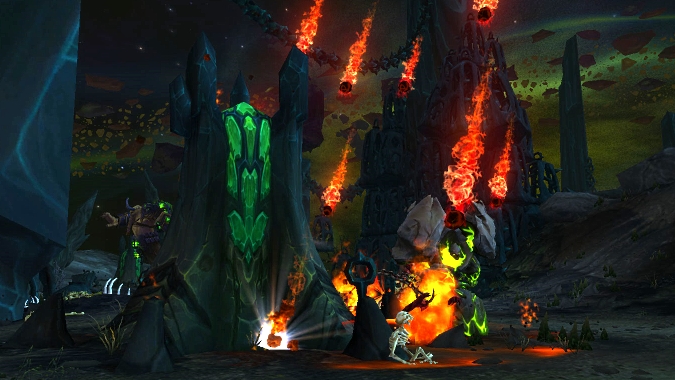 So Cataclysm swapped rows with Fire and Brimstone. On the surface, it looks like one AoE talent swapped for another AoE talent, which doesn’t make a lot of sense until you realize that Cataclysm separated from Soul Harvest gives Destruction the option to spread Immolate to ten targets to get the maximum possible benefit of Soul Harvest. You can still have the generalized AoE build of Cataclysm and Fire and Brimstone, but now you can also have the specialized burst single-target build of Cataclysm and Soul Harvest, where, as the fantasy Warlock should, you use your enemies (Cataclysm applying Immolate) to fuel your most powerful spells into your primary target (Soul Harvest’s damage buff to all damage). There might be some powerful sustained AoE damage with the combination of Cataclysm + Soul Harvest + Rain of Fire, since Rain of Fire’s damage is buffed by the target already having Immolate, but that depends more on Rain of Fire not hitting like a wet noodle. Channel Demonfire could also see a three-row connection between talents, but it depends on how tuning and encounter balance determine whether it’s better to spread or funnel Channel Demonfire’s 15 felfire bolts via spread or specific Immolate application.

Could we see Demonology’s Hand of Doom swap tiers to complement Soul Harvest? On the one hand, it could stay put, since it’s fairly easy to put Doom everywhere already. Also, where would it go and what would go better on the level 60 tier than Hand of Doom? My personal vote is for Implosion to move, because I don’t find the sense in a spell dependent on the number of imps you have out to share a row with talents that increase the number of imps you have out. That would give some fun interaction between the talents with the gold artifact trait for Demonologists, The Expendables, which gives you a stacking damage buff according to imp deaths or despawns.

However, one problem with my idea is that if Hand of Doom switches with Implosion, then it loses the interaction it currently has with Impending Doom, which spawns an imp for every Doom tick (Doom ticks only once per 20 seconds base, however). Implosion would also probably get stuck in a cookie cutter with Demonic Calling, Improved Dreadstalkers, and Soul Conduit, because since it’s restricting access to Soul Harvest and Power Trip, it doesn’t jive with much else. 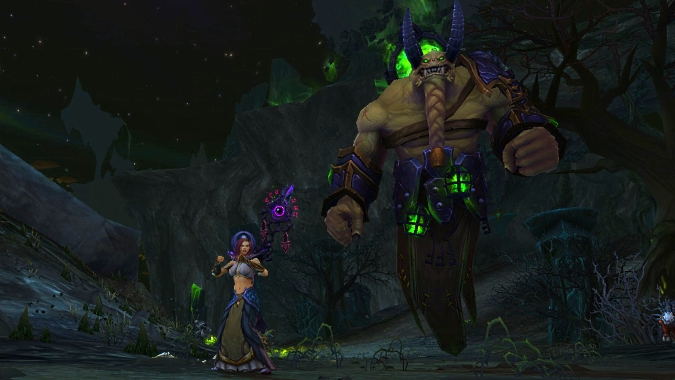 Demonologists don’t have to deal with this one, but Mana Tap is the talent that every vocal Warlock feedback poster likes to hate. I think it’s more to do with what kind of complexity it creates rather than the fact that it creates more complexity.

When you have Soul Harvest as a Destruction Warlock, your immediate thought is, “I need more Immolate up. Hmm, how can I do that?” As we discussed, Cataclysm is your most efficient answer. The cool thing about Cataclysm, is that it takes care of most players’ problem with maxing out Soul Harvest’s effect. The min-max-iest of all might still have a custom LUA Weak Aura that finds out if you have 10 targets with Immolate up or not. For the majority of players who guesstimate these things, Soul Harvest requires “a lot” of targets, and Cataclysm is a thing you cast when there’s “a lot” of targets stacked up together, so Cataclysm helps eliminate the need for a separate user interface tracker for Soul Harvest for the majority of players. If you use Cataclysm first, then your Soul Harvest has a fairly decent duration on it, if not maxed out.

Mana Tap, on the other hand, is one of those complicated min-max-y things. On the one hand, you feel the need to calculate out what the best mana percent is for Mana Tap to happen consistently, which means you’ll find some addon for your user interface that puts a marker at that point to remind you not to be stupid with it. On the other hand, you could feel the need to Life Tap immediately after using Mana Tap, which means you might find a cast sequence macro that achieves the scintillating result of using a non-damage ability for the first GCD of your powerful damage-buff.

Mana Tap doesn’t promote the complexity of skillfully lining up spells the way using Cataclysm well rewards you with a more powerful Soul Harvest damage buff. Mana Tap is just there, a maintenance buff that you want up as much as possible, and if you pick it, it forces its way into your frequent rotation. Cataclysm means you can have more Immolate if you want to, which cascades into more Soul Harvest or other perks, whereas Mana Tap means you need more Life Tap to get that damage bonus, whether you want to do it or not.

Of course, Mana Tap is multi-faceted and represents a different playstyle for Destruction than we’re used to from recent expansions, and that different playstyle might be where its meaningfulness lies. However, when it comes to discussing meaningful choices within talent trees across the rows, Mana Tap falls short. Mana Tap doesn’t feel like meaningful fun, because it promotes more restriction within the specialization, not more choice.