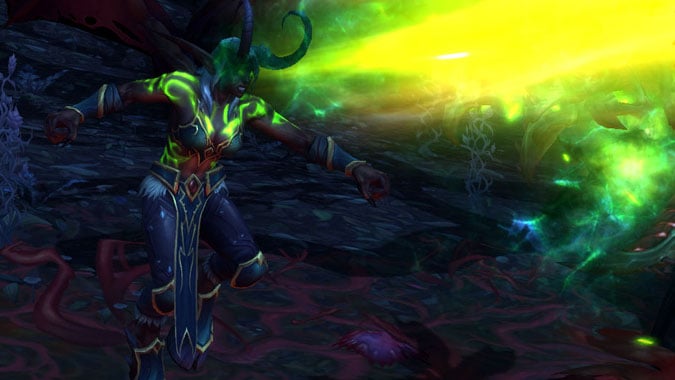 I am leveling up a horde toon mostly through dungeons (who’d have thought?) and it seems like the tanks don’t really care if anyone else shows up. They use whatever speed boost their class has to get to the mobs/boss and mow them down. On the plus side, they don’t seem to care about any other DPS. Is this how things are in today’s LFD? It’s been generally a positive experience so far.

Having recently started leveling a monk alt … yeah, basically. It’s become clear I don’t actually need a party with me in level-up dungeons, I just have one because queueing up is the fastest way to get to a dungeon. There are no problems Keg Smash can’t fix. This didn’t come as a surprise to me — we had this problem in our weekly leveling stream. When Rossi was playing his monk, none of us had anything to do. He’d Keg Smash a pack of mobs to death before I could finish a spellcast.

I don’t know whether or not any of the Legion class changes will have any impact here, but at least for the time being, tanks (and especially monks) can solo low level dungeons (at the appropriate level) with ease. It’s easy to forget you even have a party when you can plow through everything on your own.

I know the Nexus (HotS) is a don’t-think-too-hard-about-it kind of place, but wouldn’t it be like, an extra bizarre experience for the Overwatch heroes, as the other games canonically exist in that universe already?

..wait, does that mean that HotS itself might exist in the Overwatch universe?

This is exactly why I want D.Va in Heroes of the Storm. I don’t even care what abilities she has or how good she is or anything like that. I want D.Va, pro StarCraft player, to have dialogue with Kerrigan.

Is anything happening with Pet Charms in either the new patch or Legion? I have lots stacked up and not sure whether to spend them now on stones or cosmetics or hang on to them.

Pet Charms are still the pet battle currency in Legion. As of tomorrow’s patch, the Warlords of Draenor sources of Pet Charms will give out less of them, so it’s a really good idea to not dump your charms into cosmetics. Hang onto them to buy the Legion goodies.

Does Tuesday’s 7.0 update kill the gold missions in Garrisons and Shipyards?

Sadly, yes. All of those missions will reward Garrison Resources instead. Keep an eye on the site — soon we’ll be publishing a quick guide to how to cash out your garrison before tomorrow’s patch.

They wear leather, so I suppose Leatherworking might be a decent choice. Honestly, most professions provide some benefit to almost anymore. Everyone can use potions from Alchemy, everyone benefits from most of the Engineering toys, everyone uses Enchanting, and so on. You probably wouldn’t want to take Tailoring as a Demon Hunter, but heck, maybe you want to make pretty dresses for roleplay. I won’t judge you.