The Queue: My best Kermit flail 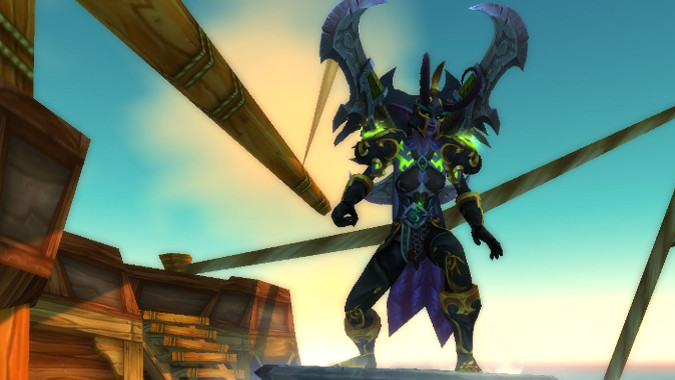 So, uh, yeah, I may have totally forgotten I had to write the Queue today. It’s been a week, let’s just leave it at that, okay?

This is that Queue I just remembered I’m supposed to write. Let’s talk about Blizzard games.

So … Theramore. Does anybody else wish that, if you’ve played through the Theramore-based quests (or, basically, completed the “Dustwallow Marsh Quests” achievement, then upon reaching level 85 and getting into MoP content, you could see the ruins of Theramore?

I only did the MoP Theramore scenario on one character, my human rogue, who I had planned to run as my “main” for MoP. So it feels odd (something I just realized yesterday as I passed Theramore while taking a taxi from Gadgetzan to Ratchet for invasions*) seeing Theramore on a max-level character, knowing that it was destroyed at the beginning of MoP, yet seeing it entirely intact simply because I didn’t do the scenario on that toon. As if the whole fiasco never happened.

* On a side note, I got a kick out of seeing a long line of gryphons taking the same taxi route from Gadgetzan to Ratchet.

If you went there on your rogue, Theramore would be gone. It’s only there for your other character because they haven’t done the content where it was destroyed. I noticed this the other day when I flew over Theramore on my Death Knight, who is level 100 and who ran Mists of Pandaria content but never did any scenarios or otherwise saw Theramore’s destruction. The flight point, quest givers, it was all still there.

I find myself wondering if we should just flip Theramore to ‘crater’ phase for every character past Mists. Zidormi is already in two zones doing the ‘remember before this was destroyed’ shuffle.

Flagged some people for PVP and let my pet kill them.

Eventually turned into a Dreadlord and killed more people.

I admit I’m jealous. I’ve helped kill a few Dreadlords but I haven’t been given the opportunity to be one yet.

Is there a shield drop for Legion Invasions?

Nope, sure isn’t. I went Restoration to be a pocket healer for my wife’s Warrior on my shaman, and now I’m rolling in 700 gear in all slots except for my shield, where I’m stuck using a 650 shield I picked up in Tanaan. I am less than happy about that, let me tell you.

In general I’m not happy with the paucity of weapon/offhand drops in the Invasions. I feel like there were more options available and they could have put in things like shields and off hand items.

Going around asking random demon hunters if I can touch their horns. I love playing on a RP realm

On getting my DH through some invasions, I had some down time and decided instead of running my Hunter or Death Knight or Warriors through any of them, I’d take the time to wander around Stormwind on her. I went various places like the Auction House, the Cheese Shop, and the Cathedral and had her muse on how confusing it all was. Since my DH is on an RP realm, I even had the chance to engage in a little with a random passer-by Paladin.

I of course had no idea what a Paladin was — I’m a Night Elf Demon Hunter, and I’m RPing that I actually deserted the Wardens to join the Illidari, so Maiev loves me and I have no idea what the Alliance is or why we’re a part of it. I was very confused to see Tyrande in Stormwind Keep, as an example.

It was a fun half hour as this incredibly patient Human woman walked me around Stormwind explaining what things like Barber Shops and Wine Merchants were while I said things like ‘Oh, wine. Yes. We used to have that, my mother would crush Moonberries to make that. Until the demons came. I remember her blood mixing with it in the ruins of the common room’ or ‘they’re not in pain? Oh, they’re singing. Songs. We used to sing. My brothers had strong voices. I hear them scream when I sleep. I don’t sleep.’

So yeah, I agree, Demon Hunters are awesome for RP. Thank you very much for your tolerance, random Paladin.

Those spaceships.  Is it possible the eredar invented them for the demons to travel through the Twisting Nether/space?

I think Argus was a technologically advanced planet, right?

Or dimensional ship, whatever *remembers the discussion about Exodus*

What’s interesting to me is that the ‘ships’ dropping fireball infernals on Azeroth are exactly the same from the outside as the final fight location in the Demon Hunter start zone, save that the ships lack open entrance points that Brood Queen’s base had.

I mean, we know the Exodar isn’t just a ship. It’s a living being. We found that out in the Velen leader story. So what if the Legion got their hands on a Naaru and shaved a piece off, zapped it with fel and are now using it to grow new structures on world’s they invade? It would explain why they didn’t do it before — they only recently caught one, perhaps. There are lore developments in Legion that hint at this as a possible scenario, but I won’t spoil them here.

I’m just saying, it seems interesting to me that the Legion can suddenly just bamf weird towers with giant green crystals into existence (didn’t do that during the Third War) and that we can take these towers out just by smashing a couple of said crystals.

Okay, that’s the Queue for today. Not to get too maudlin, but please remember to be kind to each other and tell the people you love that you love them. Make sure they  know. It’s important and life has a way of distracting us from it. I’ll see you guys on Friday’s Queue.

Blizzard Watch is made possible by people like you.
Please consider supporting our Patreon!
Filed Under: Demon-hunter, Invasion, Legion, Naaru
Advertisement