The Queue: This seems fine 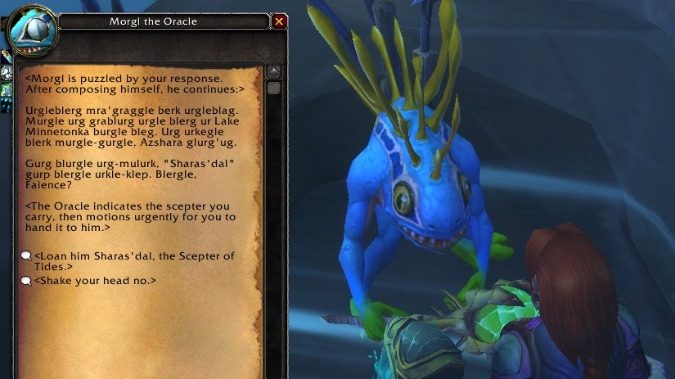 Why hello there. You seem like a stalwart and trustworthy Murloc. You want to borrow my Artifact for a minute? Why sure little buddy. That sounds like a fantastic idea.

You won’t believe what happened next!

Q4TQ: What’s the most pleasant surprise for you regarding your Order Hall experiences (on any class)?

Liz: I enjoyed meeting Morgl the Oracle in the Shaman class hall. I have no idea what he’s saying, but he seems pretty chill. (Oh, and as to what happened next, he gave me some artifact power.) I also like Lorewalker Ruolin singing the ballad of Liu Lang in the Monk class hall. (Note, the video linked is not from the Monk class hall, but I couldn’t find one of him there.)

Mitch: Sorry if you’ve already seen me tweet about this, but I absolutely love that your class’s tier sets will show on item racks if you’ve collected their entire appearance. It’s something I’ve wanted for a loooong time, and I’m glad Blizzard added it in alongside the Wardrobe.

Liz: Never apologize for your opinions, Mitch. I mean, except when you’re wrong. :)

QftQ , did this expansion put an end to old content farming? Long from now when we are at 120 or 130 won’t we be phased back to 110 if we come back to any Legion Zone or Raid or Dungeon?

Liz: I think we’ll have to see how Blizzard decides scaling should work in future expansions. Commenters are right to say that not everything in the expansion scales, but what about the dungeons and zones that do? Perhaps they won’t scale any farther than 110, leaving going back to do old content much the same as it always has been. Some have asked for this kind of scaling to be added throughout the game, which I think would be really cool for leveling alts… but would also keep us from feeling more powerful as we progressed. (Though maybe it would be appropriate for Hogger to rofflestomp max-level players.) Whatever they do, I think Blizzard needs to maintain soloability for old content — it’s just fun.

Mitch: Put simply, I don’t think Blizzard would ever make it so that Broken Isles kept scaling past 110. They may use scaling in other ways (and I hope they do!) but they’re always going to want to make sure that a new continent is the best and most important place to level. If going back to Broken Isles scaled you to a point where mobs were relevant, wouldn’t that also grant XP? And if that happens, why bother with a new, likely land-locked continent?

Liz: I hadn’t even thought about that. You’re completely right.

Mitch: My guess is that scaling in Broken Isles stops at 110. We may level higher, but the mobs won’t.

Q4tQ: Dose anyone have any little pet peeves in WoW? Nothing game breaking or something you would quit over, but rather something that’s in your face in the content that you want to do, but can’t avoid.

No its not sharp and greating like Sindragosa’s or the various Harpies (I seriously want to find the harpy writer and turn his “flesh and bone to earth and stone”…). Far worse is that it seems out of character.

Xavius was a High Councilor to Azshara, and perhaps the second most elite in his time (after Azshara herself of course), he was refined, vein, imperious, greedy, cunning, and much like the Nightborne in Suramar. The Xavius we get in game doesn’t seem to exude and of these qualities (Well maybe cunning with the way he bated Malfurion, and pwned Ysera). And the satyrs we see in game (ostensibly his descendants), are sadistic and cunning. They’re like Nathrezim, but a bit more theatrical.

Xavius voice does not sound like an elite Highborne used to looking down on his fellows with contempt (for the sin of not being born as great as he is), and amplified by the ur-sadistic nature of being a Saytr. Rather it sounds more gruff, blunt, and aggressive. Its as if Garrosh got rezed as a Satyr.

With as good and nuanced the Nightborne are, I’m surprised Blizzard fell down with Xavius. Since he’s basically that, but red and angry.

Mitch: I agree with Liz’s, but I personally find it to make the game LITERALLY UNPLAYABLE… until I turn it on. Mine? The freaking Void Priests in the Priest Order Hall that are using a Mage-tier lookalike and that NO ONE AT BLIZZARD EVER FIXED DESPITE COMPLAINTS SINCE ALPHA. Ahem. It bothers me. But I won’t quit over it.

Liz: I have only ever heard you complain about that.

The last comment in the queue got me thinking. All the quests in WoW only have one outcome. “Go kill that guy because I’m the quest giver and I said so and if you want the sweet l00t for this quest YOU WILL DO WHAT I SAY.”

How awesome would it be to have quests that can be completed in more than one way? Perhaps you’re asked to kill someone, but instead you are given the option of talking to the target and killing the quest giver instead. So you can do either of the two options as it fits with your character. I want that. I want that now.

Liz: I’d honestly love if WoW would do quests that offered you option in how you completed them — I believe someone in the comments mentioned the moment in the Demon Hunter starting quests where you can choose to either sacrifice yourself or sacrifice another Demon Hunter to power a gateway. The end result is the same, but having the choice feels meaningful (even if it did not, in fact, actually have an impact). One of the things that hugely frustrated me playing a Horde character through Pandaria is that you are required to do everything Garrosh asks of you, well beyond the point where he’s clearly fallen into supervillain territory. Pandaria was a place packed with bad life choices, and you were required to make them to progress. Ugh.

Mitch: *shameless plug* Oh hey, have you ever listened to our Mass Effect podcasts?… But really, when I played through Mass Effect, this is something I talked about a lot. I would love more than anything to have even the illusion of choice. Not on a Mass Effect level, but something. Magram vs Gelkis, Aldor vs Scryers, Frenzyheart vs Oracles… what happened to this kind of stuff? More important, how cool would it be to to have a reason to go back and level through zones, knowing you could actually see something different than Alliance or Horde perspectives?

Anyone else dissapointed that others can’t see what bodyguard you actually use?  I feel all boss dragging Rexxar around with me, especially in the pvp towers desroying the Horde troops, but its just an illusion.  My guildies tell me its a Draenei.  Breaks my heart a bit.

Liz: WoW couldn’t handle the simultaneous number of Rexxars that would appear if everyone’s Rexxar looked like Rexxar to everyone else. And as has been pointed out, it was the same with bodyguards and even NPC companions — because yours is supposedly a unique character, only you see it as that character. And isn’t it kind of cool that Rexxar’s in game and he only hangs out with you? Other Hunters, no way, he wouldn’t deign to be in their company, but he’ll follow you all over the Broken Isles. I think that’s pretty cool.

Mitch: I think it’s better to have unnamed bodyguard than to go full-Huln and see a million of the same “legendary” figure.

Liz: “Go Full Huln” is my new favorite phrase and I’m going to use it as much as possible.

Mitch: That scenario really didn’t make any sense. It could have been so much more epic.

Mitch: Instead it was three dozen Huln’s swinging polearms wildly at air hoping for a demon to appear in front of them. Not to mention all of them going “RAAAAAAH” every time they run somewhere.

Is it a really bad idea to take a bodyguard because if you do you can’t use them on missions?

Liz: I guess it depends on how you define “bad.” I feel bodyguards are a big help when soloing on healer specs, and I imagine they’re similar useful for paper-thin DPS classes. They can level when you’re out adventuring, which is helpful, too. But I admittedly pull mine from bodyguard duty occasionally because I need him for a mission. So, really, which do you need more? The mission completion or an extra hand while you’re out in the world?

Mitch: I haven’t found too many missions where I went, “omg I need to do this right now!” As a result, if there ever is a mission like that, I just pull my bodyguard away from protecting me for a bit to go do stuff. In most cases, though, I can get missions done and have a bodyguard. The bodyguard is very, very useful.