The Queue: Puppy in a ladybug costume 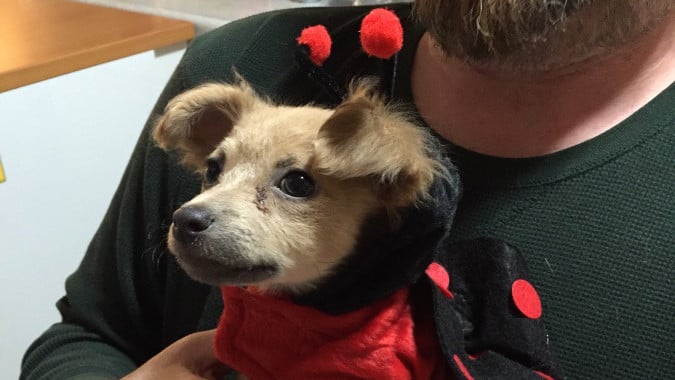 I know people don’t want to heat about depressing real life things that happen to us, so instead of talking about the thing that happened this week (you can go to my twitter if you want details) let’s just look at this picture of our dog Marrina in a ladybug costume.

Oh, and RetPallyJil — I feel you. I really feel you right now. Hopefully the puppy picture helps as much as such things can.

Yeesh my 70-year old dad is kinda crazy about the Star Wars universe at the moment.  His theory at the moment is that Rey is Obi-Wan’s granddaughter.  :P

He’s also totally convinced that Rey is going to have a double-bladed lightsaber.

I think he’s entering his second childhood personally :I

There is no harm in it. Speaking as an aging man who has no intention on giving up my various interests and pursuits, let people enjoy what they like. Even if they are your parents.

I like to think that there’s an alternate universe, very, very, very far away in the timespace continuum from our own Azeroth, where Sargeras still decides to destroy all of creation (as, apparently, he always does, because he must), but he goes the Galactus route instead of the fallen-angel-corrupt-and-debase-everything route.

Galact-eras is a shining paragon of virtue and Light. The universe must be destroyed to prevent the void lords from corrupting everything. So he goes from planet to planet, finds traces of Old God contamination (which, duh, is everywhere), traps an Old God servitor, and kills the Prime Designate for that planet… which triggers a visit from Algalon. Galact-eras shows Algalon the Old God servitor, says the world is irredeemably corrupted (and it’s Galact-eras, the Champion of the Titans telling him this, so of course he believes it!) and Algalon destroys the planet — exactly as the Titans intended.

But only one planet had a Prime Designate. The Titan-Forged on Azeroth weree a far more elaborate affair than on other worlds, and the specific setup of the planet after the Titans defeated the Old Gods was unique as well. Other planets saw Constellars visit and judge them directly. So Sargeras wouldn’t have a Prime Designate to kill in the first place.

This also ignores that the entirety of the Titan facilities on Azeroth, including the Halls of Origination and the various Engines that create Titan Forged beings, are also unique to Azeroth. Other words may be destroyed but they aren’t Re-Originated — that process was created as a last ditch attempt to save the World-Soul of Azeroth in the event that the Ordering failed after Y’Shaarj’s destruction and the imprisonment of the other Old Gods.

Sargeras directly killed one planet and its World-Soul when he made his decision. Luring a Constellar there by killing a Titan Forged Prime Designate seems like a waste of time. Assuming he’s not fel corrupted and assembling a Legion to destroy all of creation, then if he arrives on a planet and decides it needs to be destroyed, why wouldn’t he just destroy it himself? Sargeras is far more powerful than any Constellar.  Assuming he wished to stay in the Titan’s good graces for some reason, trying to trick Constellars would be less efficient than simply doing it himself and then telling the other Titans what he’d done… which we know from Chronicle he actually did, and their horror and rejection of the idea forced him to found the Legion instead.

In essence I think your idea doesn’t really work because other worlds (like Draenor) saw the Titans visit them, but ended up very differently than Azeroth and didn’t have the same processes set up. There are no Prime Designates that we know of to kill in the first place on most Old God corrupted worlds.

Mine: RUNAS: “Off to Zarkenhar, then… to see my friends, my family, and loved ones… to kill them, of course, for harming your dragon.”

One of my favorites is still Finna Bjornsdottir saying “I’d rather kill it” during the Broken Shore opening for Warriors.

Thoras Trollbane says “This war will not be won with words” which I also like (he’s one of my favorites in the Death Knight quests) and I’m a sucker for Genn Greymane’s “You took my son’s future. Now I’ve taken yours.”

Also, despite what my fellows on the leveling stream say, I was genuinely moved by Tyrande’s talking about her and Malfurion’s relationship in Val’sharah.

Q4tQ: I’ve noticed some artifact quests take you to the same locations (Broken Shore, Niskara, Northrend etc). Is there a canonical order that we as players went to these locations?

For instance, I noticed dead Paladins while doing Vengeance Demon Hunter and then when I did Ret Paladin, I was with paladins who died there

Some of them are easier to figure out than others. For example, Arms Warriors seem to go into the Tomb of Tyr after Shadow Priests go in there — we essentially clean up the mess they caused by trifling with powers they can’t comprehend. (I’m looking at Mitch here.) But I don’t know when Holy Paladins go in. I’m pretty sure it’s after either Priests or Warriors, since things happen that would make those two questlines more difficult.

I’m not promising a KYL on this, but I’m sure both Anne and I will touch upon all this at some point. I still have a lot of Artifact quests to do — all Hunter, two Paladin, all three Shaman ones and one Demon Hunter for sure. I’ve done all Warrior and Death Knight ones and the Ret Paladin questline so far. Since I don’t play cloth classes, and my Druid and Monk are both a fair way from 100, I don’t know when I’ll get to others.

The required dungeons in the Class Halls is disappointing. I stopped doing dungeons and raiding because as a senior citizen, my reflexes have slowed down too much. I just like questing and doing professions and using WoW as a brain exercise. I tried the LFG thing and nothing. I am now max level but stuck with only 3 champions because I haven’t done the first Class Hall dungeon. I have all my alts in my own guild so I really don’t want to have to join a new guild JUST for dungeons. Ah, well. While it is frustrating in game, life generally is in any case.

I can relate — I went from Mythic raiding in Mists of Pandaria to a legally blind player who mostly doesn’t want to group or run dungeons/raids because I can’t perform to my old standards. While I’m not a senior citizen, I am still a decade older than I was when I started playing this game, and I wasn’t young then either, so my reflexes have also deteriorated as well.

I will say that I did complete my order hall campaign via LFD. It really isn’t very hard to run the dungeons on normal or heroic, and the groups I’ve gotten haven’t been too awful about my limitations (which I admit I don’t share). My DPS has been tolerable (sometimes it’s even good) and overall I’d say it’s worth giving a shot to get to see the campaign end. If you can pull off the class order hall campaign scenarios you can likely run a dungeon.

Q4tQ: Right now I am sitting at about 735 ilvl and I’m not really sure what content I should be doing to raise it. WQ seems to only give me 725-730 with a rare chance to go up. Loot from emissary quests and normal dungeons is way to low. What is the base ilvl for LFR and heroic dungeons? It seems like anything beyond that no one will take me because my ilvl is too low. Is there anything else I should be doing to get my ilvl up?

I saw from your conversation with Mistah Jay that you’re actually around 835. My suggestions:

Check World Quests for quests in your general ilevel range — they have a small chance to upgrade to Titanforged. I have three pieces of 850 gear I got from that.

At 835 you’re geared enough for LFR and Heroic Dungeons, but I think Mythic dungeons are a better source of gear if you’re already at 835 — it won’t have much for you if you’re that geared already.

Every week a new World Boss seems to open up, and you don’t even have to get a pick up group for it, just go to the spot on your map and tag it during a kill. They drop 860 gear and you can use a Seal of Broken Fate for a second chance on a drop.

Also you can try for Normal raiding using the Group Finder. A lot of groups have cleared Emerald Nightmare already.

Q4tQ: Are there any real advantages to raising your class hall companion’s item level? So far I’m funneling resources into them, but the rewards and missions aren’t noticeably better.

There are missions that require higher ilevel on your champions to complete and they tend to reward items that give you quests for cool stuff. That’s about it as far as I can tell.

Okay, that’s the Queue for this week. I wanted to take the opportunity to thank everyone that’s tried to offer help with my bad situation this week.  It’s still a bad situation (really, this whole year had been a bad situation for me) but I’m hopeful we can pull out of the tailspin, and I appreciate very much those of you who’ve helped. See you next week.

Blizzard Watch is made possible by people like you.
Please consider supporting our Patreon!
Filed Under: Puppy In A Ladybug Costume
Advertisement