The Queue: So dang dark 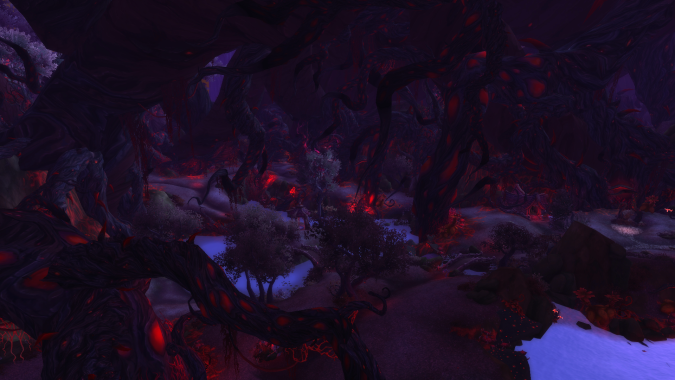 Do you think things like Shal’aran and the Withered army training will go away during the expansion? In 7.1, Thalyssra and the rebels are already starting to take back Suramar and we know we are going to push to the Nighthold before 7.2 comes out. If we succeed in taking back Suramar (and it doesn’t look like it’s gonna be at the end of the expansion), Thalyssra and the gang surely wont keep hanging out underground in Shal’aran.

I’m just asking because the windwalker’s hidden artefact appearance is linked to the Withered Training and I want to know if I should try to complete that as soon as possible. They have already said the some world quests in Suramar will change and once the city is taken back, there won’t really be a point to training withered for the rebels.

I imagine things like Withered Training will remain. If nothing else, it will at least be there at least while characters progress through the Suramar content — it’s part of the buildup and storyline, after all. Withered Training is also such a complex feature, I’d be shocked if they built it (and all its rewards) only to remove it within a patch or two. If Thalyssra isn’t the one giving you the quest anymore, someone else will be.

Is anyone else just completely tired of the whole follower/champion/mission table system? We had it as a major feature in WoD, we have it again as a minor (albeit MANDATORY) feature in Legion. And honestly its just not very fun. It’s nothing but a drag and drop mini-game with a facebook-esque timer. It feels more like filling out paperwork than it does like commanding troops. WoW worked just fine without the feature from vanilla through MoP, I don’t see the need for them to keep bringing it forward.

I’m not tired of it, and in fact, I love it. I’m glad they have it and I hope they keep it. It’s likely a little puzzle to solve every day, deciding which rewards I want and how to most effectively acquire them with the resources at hand. In that sense, I bet it’s a whole lot like commanding troops, honestly. I’ve never been in the military, but I’d guess at a certain point it would involve a whole lot of delegation and paperwork. A General can’t be everywhere; making sure others are in the right place is their real job.

While I know there are people who don’t like the system, I admit I don’t understand the vocal backlash against it. As someone who absolutely adores the system, I can’t recall a time it took up more than 5 minutes of my day — even in Warlords of Draenor where there were far more followers running many more missions. If timers are the problem, well… pretty much everything in WoW is on some sort of timer. Are you waiting 24 hours for a batch of World Quests to refresh so you can get more gold? Are you waiting a week for a raid lockout to reset so you can get more loot? Yeah, the quest items for class hall missions make you wait 12 hours for completion or whatever … but getting rid of the mission table wouldn’t mean Blizzard gave you all 50 (or whatever) items at once. You’d be waiting for something else. That’s just how WoW works. You only acquire things at the speed Blizzard wants you to acquire them.

Does anyone else have issues with the in game map? When I am flying from place to place I like to plan my next strike. Sadly, the map keeps jumping back to the area I am in which is super annoying and frustrating. I try not to have to use add ons but the map is nigh useless unless you’re standing still. What map add on is your fav?

Are you sure you aren’t currently using any map addons? My map doesn’t behave this way. I plan my world quests exactly as you describe and not once has my map jumped to where I don’t want it. It’s possible a map addon you already have enabled is doing this to you. As a test, I just jumped on a flight from Azsuna to Stormheim which crossed through Suramar. I kept my map open to Highmountain awhile in flight. My map stayed on Highmountain the entire time. Now, if I close and re-open the map, then it goes back to where I am, yes. I imagine that’s intended behavior and I suppose don’t know why you’d want it to behave otherwise. If I’m figuring out where to go, I keep my map open. If I’m figuring out where I am, I open it for the first time. I don’t need to open/close my map repeatedly if I’m already in flight.

And that’s all for today’s Queue! It was a bit short, I know, so I leave you with this music video as compensation.


Blizzard Watch is made possible by people like you.
Please consider supporting our Patreon!
Advertisement