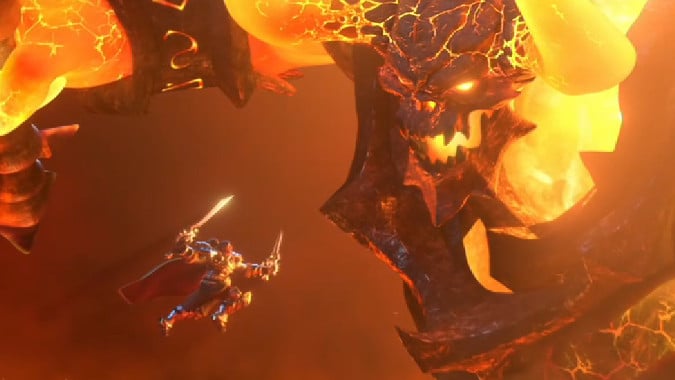 The Heroes of the Storm Deep Dive panel is about to begin. This panel will explore the new heroes Varian Wrynn and Ragnaros as well as all other upcoming game content.

2:00 p.m. And we’re live! They’re starting off with, as usual, some retrospective — discussing the point where, during development, they felt they had “enough” heroes. Varian Wrynn was actually one of the earliest heroes in development — they paused development on him in 2012.

2:04 p.m. They’re starting with a lot of art discussion. New artwork and World of Warcraft character models all contributed to more recent iterations of Varian Wrynn’s character model. Many of the details in Varian’s new model came from artwork released after they paused development on him in 2012.

2:07 p.m. Varian’s Master skin uses a helm inspired by King Llane’s helm from the Warcraft movie as a sort of heirloom. Varian’s Lo’gosh persona is one of his alternate skins. Now they’re moving on to gameplay/game design.

2:10 p.m. Varian is a multiclass hero — both a Warrior and an Assassin, qualifying for both for daily quests. They started his gameplay development with his talents which they admit makes no sense, because they didn’t know what his abilities were yet. But they knew they wanted him to be versatile, doing cinematic things like splitting his sword into two blades. They wanted him to be able to play offensively or defensively, as a frontline tank, a bruiser, or a DPS.

His first ability (Q) is Lion’s Fang, a sword slash that hurts people in a line and slows them. His W is Parry, allowing him to take zero damage for all incoming damage for a short period. His E is Charge. (“What’s a World of Warcraft warrior without Charge?”) His Charge closes a gap and slows his enemies. 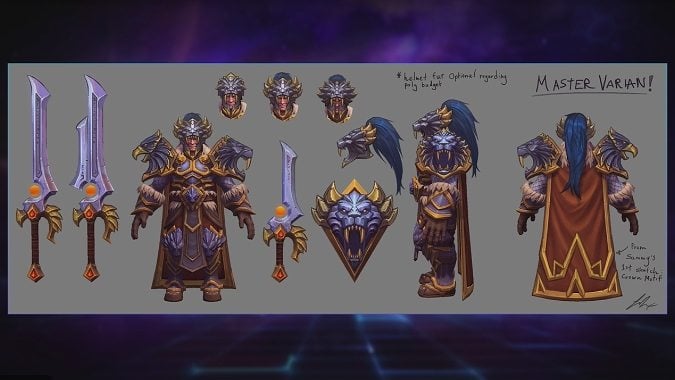 Varian can choose Shield Wall which causes Parry to give him Protected status instead, or Warbringer which turns his Charge slow into a stun on a shorter cooldown. At level 10, he can either choose Taunt which turns him into a beefy tank or Colossus Smash which doubles his attack damage and turn him into a DPS. Alternatively, he can take Twin Blades of Fury which causes his attack speed to ramp up while attacking.

Varian can also choose one of three banners to give your party a passive buff. Banner of Ironforge gives your party an armor buff, for example. Banner of Dalaran gives a boost to ability power — perfect for the casters in your group. Banner of Stormwind gives you and your allies a move speed boost. 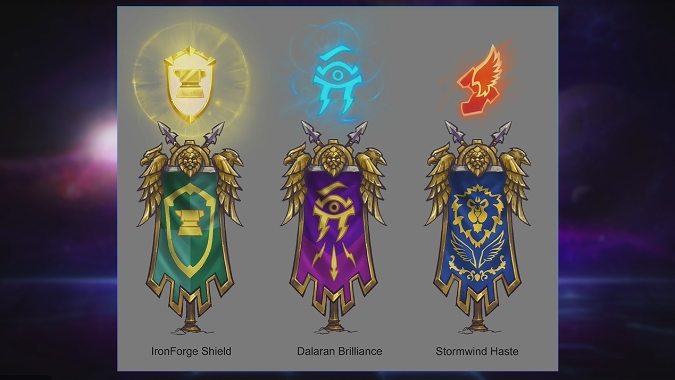 2:24 p.m. Ragnaros is meant to evoke the nostalgia of a raid boss. They want the player to feel like a raid boss — in Heroes of the Storm. He has a hero form and a much larger raid boss form which is used when he becomes a fort. Rather than using simple fire for his animations, they incorporated chunks of stone which borrow from Molten Core’s aesthetics. 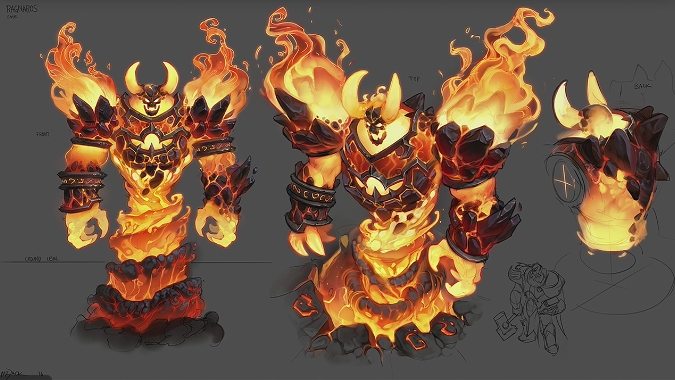 2:30 p.m. They showed off the Master Skin which is essentially Ragnaros with more spikes. However, they also showed off a Li’l Ragnaros skin … which is an adorable little baby Ragnaros. Seriously.

2:31 p.m. Gameplay! Original concept for Ragnaros had him replacing the team’s core, raining destruction from afar. The player would spawn controllable Sons of Flame — which made playtesters feel like they weren’t Ragnaros. They saw the Sons of Flame more often than not, and the only time you saw Ragnaros on the map was when you were losing and the opponents were hitting your core.

They tried giving Ragnaros a Submerge ability to fix that, but … what happened then? What happened when you moved the core? Did Ragnaros take core damage? Was he immune? They decided this was a terrible idea.

2:34 p.m. They decided to move Ragnaros’s stationary form to Keeps and Forts. At this stage, they thought to use Majordomo Executus as the player’s avatar to summon in Ragnaros. Again, playtesters didn’t feel like Ragnaros. They wanted to play as Ragnaros the entire time, not as Majordomo until Ragnaros was briefly summoned in. Fairly late in development did they decide to abandon the Majordomo angle — instead splitting Ragnaros into two forms, the slightly weaker hero form and the powerful raid boss form.

In raid boss form, his Q is a hammer swing, his W calls down a line of meteors, and his E casts an explosive rune. His Q in hero form is similar, but his W calls down a meteor that rolls down a lane and slows opponents. His E grants him (or an ally) a speed boost which then explodes in an area for damage. 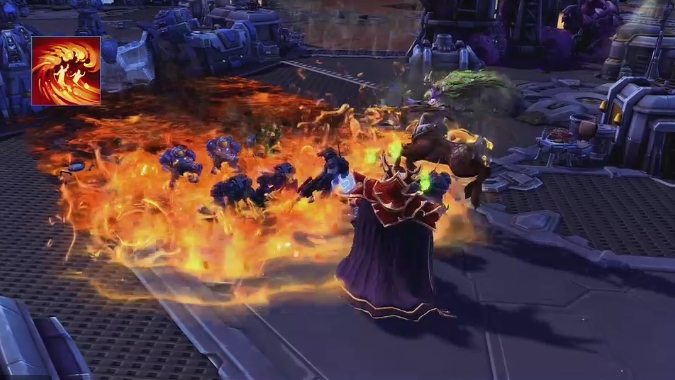 2:30 p.m. Now they’re discussing talent builds. Initially, they’d started to shy away from talents which gave too much synergy with one ability. A Valla who went all-in on Multishot talents, for example, would have an OP multishot. But they discovered players enjoyed finding these synergies, so they want to continue including it — but not going overboard.

They’ve also found some heroes need certain talents to be effective — such as survivability talents for Illidan. While they revamp talents for older heroes, they keep these things in mind and try to make choices more interesting than a straightforward “live better.”

2:43 p.m. Kharazim is receiving a talent overhaul. The experience of developing multiclass Varian Wrynn meant they could do better with Kharazim, who is a similar hero. All of this role choices receive new tools, such as Mystic Ally, which spawns temporary copies of himself to provide different effects.

2:45 p.m. Dehaka is also receiving an update to be a more effective solo warrior. Burrow will be able to be canceled early and many talents will be moved around. Adaptation will be buffed to regen 100% of damage taken rather than just 60%.

“Are there any Artanis fans out there?”

Artanis will also be receiving some changes to make him a better bruiser. The changes which accidentally ended up on the PTR — such as Phase Prism during Blade Dash — will actually be implemented.

Q: Jack-of-all-trades characters are often not as good as pure characters. How will Varian’s multiclass role avoid this?

A: Varian needs to lock into his role at the start of the game. He isn’t a jack-of-all-trades. Within a given match, the choices you make are permanent. If you want him to be a tank, he’s a tank.

Q: Two part question. When creating character skins for big heroes like Diablo, I know you’re trying to keep a similar silhouette, but would we ever see a Diablo 3 skin for Diablo? And on the topic of scale, Ragnaros is huge, but what happened to Azmodan? Azmodan is huge in Diablo 3.

A: It comes down to silhouette for scale. Some heroes are recognizable at smaller scale, some aren’t, and that’s taken into consideration. As for the Diablo 3 Diablo skin … it’s almost done.

A: They have to consider how many people actually played Blackthorne, etc … but they do have the button for Classic heroes in-game and they plan to keep using it.

Q: Noticed Zul’jin was on the in-development pane in the Varian presentation. When?

A: “Did you notice the Amani War Bear in that in-development video?”

A: Excited about it, they want to do it, but not ready to talk about it.

Q: Ever plan on introducing MMR decay? And where’s Alleria?

A: “Have they even found Alleria on Azeroth?” The MMR question will be discussed in the next Heroes panel.

Q: Any chance of a spectator mode?

A: Another thing that would be awesome, but it’s the same team doing MMR, clans, etc, so it’s all on a long list. They’d love to do it.

And then there was a man dressed as a murloc. The end! Thank you for joining us, everyone!

Blizzard Watch is made possible by people like you.
Please consider supporting our Patreon!
Filed Under: Liveblog
Advertisement