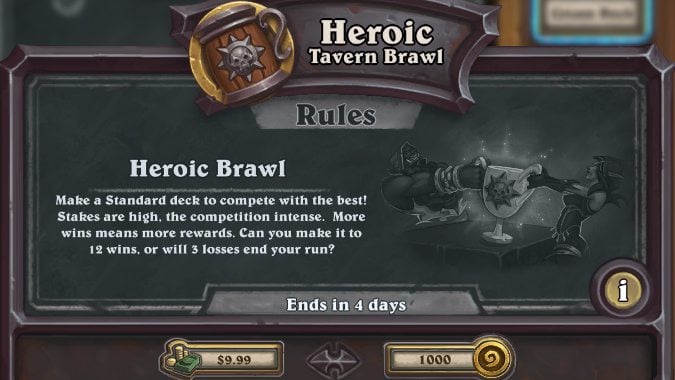 Heroic Brawl will challenge even Hearthstone’s most experienced players as they vie for glory and in-game rewards! Participants will create a Standard deck from their existing card pool and lock it in before their first Heroic Brawl match. No changes can be made to your Heroic Brawl deck once you’ve locked it in, so be sure to do a bit of testing before you finalize your deck.

Once you’ve locked in your Standard deck for Heroic Brawl, you’ll be pitted against other Heroic Brawlers in heated battle. Just like the Arena, you want to shoot for 12 wins to get the best rewards—but if you get three losses, you’re out!

For Hearthstone’s best brawlers, 50 packs, a heap of Gold, piles of Arcane Dust, and three golden Legendaries sit at the end of the 12-win rainbow. The rewards are significantly different than what you have come to expect in the Arena, and the more games you win, the better they get. Are you ready to take on the best and brightest of competitive Hearthstone?

Heroic Brawl is not for the faint of heart, and is a unique experience meant for the extremely competitive and experienced Hearthstone player. To speak more on Heroic Brawl and the philosophy behind it are two of Hearthstone’s game designers for Tavern Brawls, Dan Emmons and Pat Nagle.

Are you cracking your knuckles in anticipation yet? Here’s how you can participate!

Heroic Brawl lasts for only one normal Tavern Brawl week and has an entry fee of $9.99 USD or 1000 gold. You can participate in Heroic Brawl for a limited amount of completed runs. As mentioned above, Heroic Brawl rewards scale depending on how many wins you get, so be sure to do your best each run!

If you’re not ready to throw down during Heroic Brawl week, you can watch your friends Brawl with Spectator Mode or cheer on your favorite streamers as they go for the gold. We’ll return to our normal Tavern Brawl schedule after the conclusion of the Heroic Tavern Brawl week.

We hope that our Heroic Brawl scratches the competitive itch of the players looking for a high risk, high reward experience. 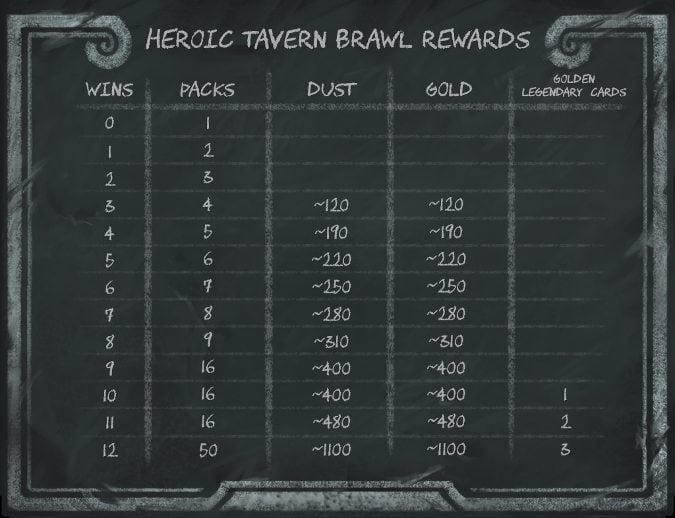 Blizzard Watch is made possible by people like you.
Please consider supporting our Patreon!
Filed Under: Heroic Brawl
Advertisement