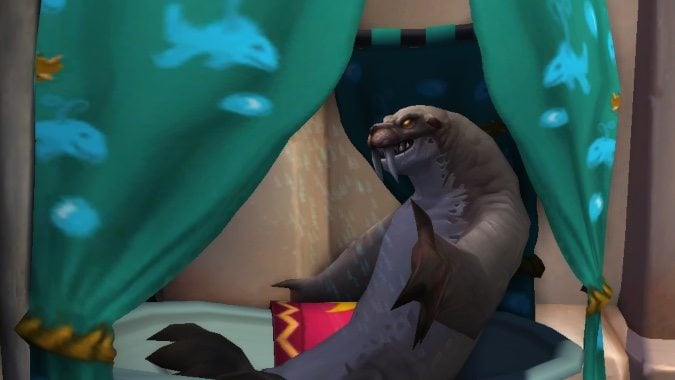 I have a cold, so let’s have an experiment in how many of these questions I can make Mitch answer.

No one tell him, okay?

QftQ: I find that there are two types of questions that are answered in the Queue. Ones that are relevant to gameplay, mechanics, etcetera, and questions that some people would find irrelevant to the game. Would it be possible to have two queues so that those of use that check it on a daily basis aren’t wasting time reading about either that we aren’t interested in? I know this probably sounds a bit salty, but I promise it’s coming from a place of positive feedback.

Liz: This is a tough one. The Queue is driven by your questions, but it’s also driven by what each of us at Blizzard Watch knows enough to talk about. Sometimes I run into a question I don’t have an answer to. Sometimes I’ll pass it on to someone who’s more likely to know (like sending lore questions to Anne and Rossi), sometimes I’ll research it,  but if I just don’t wind up with an answer (or if there are already some great answers in the comments), I’ll usually skip it. Sometimes I run into a good question that it feels like we’ve answered before (maybe more than once). And sometimes the comments go off on tangents and when I’m hunting for questions I can’t even find four or five to answer — which is definitely when I get more likely to pull out silly stuff.

Like several commenters said, picking questions is about what resonates with whoever’s writing the Queue that day and whatever the conversation in the comments is like. It’s a constantly moving target and there’s no certainty what will come of each day’s Queue. Writing it’s an adventure!

But the same thing that makes it an adventure would make it really tough to do two Queues. Because I think we’d have a lot of days where we might have a two-question “serious” Queue and a five question “silly” Queue. Or no “serious” Queue at all. I think we all aim to write some informative stuff and some fun stuff every day — and some days the balance is better than others. Like today. Most of this Queue is goofy because a lot of the day’s comments were talking about Azeroth’s schools and farms. (Why???)

Unfortunately (or fortunately, for those of you who enjoy having a single comments section to hang out in), I don’t think we’re going to split the Queue in half. We do occasionally do more focused Queues — did you know the Queue started during Wrath of the Lich King as “Ask a Beta Tester”? — but the nature of the beast is that it will always be something different every day. And being different every day means there’s going to be some inconsistency, with some sillier days and some seriouser days.

Is seriouser a word? See, I just went and ruined a serious answer.

Mitch: To add only a small bit to Liz’s excellent answer, last time I did a solo Queue, I scrolled through comments and called out in Twitter and put *every* question into a Word doc. From there, I narrowed it by what I could actually answer. After, I cut maybe 1 or 2 because I already had a lot and because I was working with a theme. Which is more of an anecdote to Liz’s answer than an answer itself, but you get the idea.

I don’t know… wasn’t the entire point of the Trial of the Crusader to “school” us all?

Liz: I know this isn’t really a question, but geez do I hate Trial of the Crusader. Yes, Tirion, let’s prepare to fight the Lich King by murdering one another. And once we’ve successfully done that, let’s do the heroic version to murder one another even more!

Mitch: God, I hate Trial. The raid encounters themselves were fine but lore-wise, it makes no sense to begin with. BUT! On top of that, when you beat normal mode, Tirion actually tells you to come back and prove your worth in Heroic mode. What?!? That line of thinking gets worse the more you think about it and ugh. I suppose it could be worse. Could be someone telling us repeatedly we need to “prove our strength” even after having already done that, ODYN.

Liz: But Odyn’s kind of a jerk from the start. Tirion’s supposed to be a good guy, helping us defeat the Lich King. And instead he’s planning on how we can best massacre ourselves while he watches from the sidelines.

Mitch: Yeah, not to mention the whole “Huh, a faction fight breaking out? I’ll allow it. Also do it again on Heroic.” UGH. Thinking about this is making me angry.

Liz: I feel you. Just think about Tirion’s legs wiggling while the Legion taunts him (and us). That always cheers me up after thinking about what a total jerk he is.

Mitch: Hahahahaha. The Light will protect him though. No need to let us help, even though we have two armies there.

As Anduin is now King and Bolvar is now the Lich King, do you think that Anduin knows that his former guardian is the Lich King? And who would have told him (assuming he does know; I would classify it as a state secret that a new regent should know).

Mitch: I think canonically, the only people who know about Bolvar are Sylvanas (from her short story), Tirion, and a “group of adventurers” (that’s you!). And depending on your interpretation, maybe some Death Knights, although they’d have to be ones who weren’t also part of that band of adventurers. Anyways, I’m not sure anyone would be able to tell him as a result. Tirion died insisting he’d be just peachy because Light, and Sylvanas prooooobably won’t/hasn’t had the opportunity to get close enough to Anduin to break the news (even if she wanted to).

Liz: Just seems like if every player in the game knows maybe someone would have told the king at some point.

Mitch: That just leaves an unspecified number of players who know. I guess if you want to interpret it as those players pulling the whole “I have a secret, but don’t tell!” thing (which ends up being a chain of people ‘promising’ not to tell), then he’d probably hear it through the grapevine at best.

Liz: it does seem like something you’d’ve told varian cuz, uh, king of stormwind. and Anduin’s always been a nosy brat. (Note: I really like Anduin, but he was definitely a nosy brat.) It would get around.

Mitch: Yeah, I mean, it’s not clarified. But if it ever DID get to Anduin, it would have to have originated from the player.

Liz: Agree. And Anduin is the kind of person who would have Regrets about this. Like, way more than us players. We got a quest to kill a guy, we went and killed a guy.

Mitch: Considering Anduin didn’t go on his own merry adventure to talk to Bolvar behind everyone’s back, maybe he doesn’t know.

Mitch: I’ll break the news. I like being the bad guy. “Hey, Anduin, you know what your father and Bolvar both have in common?…”

Mitch: He’ll be a Shadow Priest one day. He just needs the proper kick to get him into his emo phase.

2 Bosses Enter (for a friendly sparring match): Varian vs Reinhardt

Mitch: Hey, we answered something veeeeery similar once…

Mitch: Okay, well, Varian is dead so.. if he’s sparring, it’s as a zombie. And while zombies are frail and Reinhardt has a giant hammer, I’m gonna give this one to Zombie Varian because the second he gets even one scratch or bite in, Reinhardt’s a ticking corpse bomb.

Mitch: That’s his ghost and the Nexus is clearly Purgatory, since his trailer fully acknowledges the fact that Varian was a hero in his life on Azeroth.

Liz: If they’re in the Nexus, it really depends on if Varian is DPS specced and if Reinhardt lets him get to level 10 first. In a 1-on-1 it would be awfully hard to get to level 10.

Mitch: Though the Nexus’s ragdoll physics would make that pretty hilarious to see.

Liz: You’re bad and you should feel bad. (Okay, it would be hilarious.)

Liz: Well, I think I did a thoroughly horrible job of making Mitch do all the work for me, but there’s always next week. Please be sure to leave your questions in the comments for Rossi to answer tomorrow!