The Queue: Still no legendary 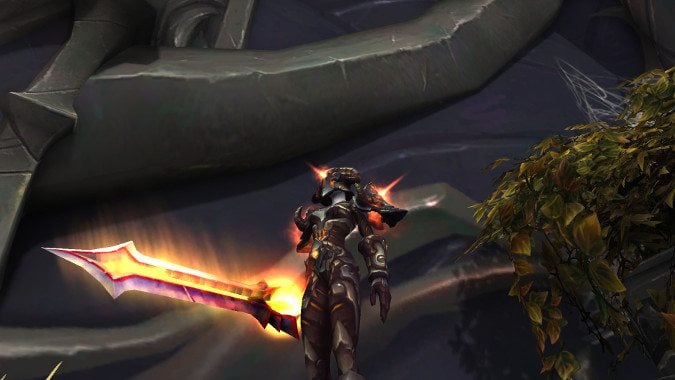 Ran a couple of mythics last night. Did some World Quests. Got some gear upgrades. Still no legendary.

Not really feeling the love for Legion‘s legendary item system and the luck protection thing.

Liz, I feel you regarding “group phobia,” and I suspect that growing jadedness with the whole idea of “LET’S DO IT TEAM OF STRANGERS” has communally contributed to things like chat-off dungeoning, which I’m seeing more and more of, and which I myself started with in WoD. All of my characters have a chat pane that excludes instance chat, say, shout, non-Bnet whispers, and any other player chat channel that I don’t specifically invite people into or control access to (like guild, for example). If a dungeon turns even slightly toxic, I switch to this channel, and treat it like a “Vs AI” Overwatch match. Once I know the dungeon, in queued content there purposely isn’t anything necessitating communication beyond “OOM, please stop,” which is why I generally only queue to tank if I’m in the mood to hear just about anything from the group… but if a healer is abusive (yes, it happens) all bets are off.

This is another reason I don’t touch mythics: they’re understood to potentially require communication, and my mute button has become a vital part of any dungeon PUGing I do. Currently I run VotW and NL heroics on my rogue daily because of thunderfury, but aside from that, yeah, unless I have 3 friends in a group or a quest to do, dungeons are pretty much out of style.

Because I am old, and I first began playing WoW when you could group with a pterodactyl and not just get one as a mount in Throne of Thunder, I remember the days before LFG tools. Indeed, those days were burned into my memory.

As a result I have a good deal of affection for those tools because of three things:

`1 — they ended the tyranny of player opinion. I have lost track of the amount of times I saw “LF Tank Shattered Halls, Paladin/Druid pls” in trade in Shattrath. It didn’t matter that Warriors could tank that dungeon fine if the party would just use a little CC and listen, because the almighty player opinion was that Paladin tanks were better because they had Consecrate and could round up all the mobs easier. Even after Blizzard made adjustments so that Warriors could more easily AoE tank, players didn’t care. It wasn’t until the middle of TBC that certain raid bosses forced players to realize they needed Warrior tanks if they wanted to progress, and I watched, amused, as raid guilds started begging for Warriors. (By then I’d gotten into a raid guild and was working on those self same bosses.) The player base is, to quote Allison Robert, relentlessly rational. Sometimes too much so. They’ll look for an advantage where none really exists.

2 — I am not actually terribly interested in tooting my own horn. One of the things I noticed before LFG and which I’m seeing again in Group Finder mythics is a tendency to need to sell yourself. Rather thank simply queueing up and taking my chances, I have to convince strangers to bring me on a group. Is my ilevel high enough? Why don’t I have a legendary yet? I’ve even been subjected to a pop quiz about the dungeon. I answered it, but I felt somewhat annoyed afterwards. LFG tools meant that none of this happened. I was simply placed in the group to do my job and get out afterwards. Sure, there were some negative experiences, but remind me to tell you about the attempt I made last night to run mythic Eye of Azshara with a Group Finder PuG and what I like to call “The Excrement Storm” the tank unleashed.

3 — LFG has tools to deal with abusive players. Yes, they’re not great. Yes, there are cases where you’re ganged up on by abusive players. But at least they exist. Group Finder? Once you zone into that mythic dungeon, you’re committed to it. I did a mythic with guildmates yesterday that actually went pretty well but we had to PuG the healer. He didn’t talk at all, wasn’t abusive, but he did die constantly. I have never seen a healer die so many times. Now, we didn’t really try and kick him, but if he’d been racist or just a troll, there would have been nothing we could have done save abandon the dungeon. We couldn’t even replace him.

As a general rule mythics don’t feel like they’re content I can PuG successfully. Other  people seem to have no trouble with the Group Finder and run them all the live long day, but whether due to my being old and more comfortable with stone knives, bearskins, and not having to talk much in dungeons or because I’m prone to keeping to myself, I’m not at all great with how mythics work in Legion.

I do keep running the darn things, though.

QftQ: when was the last time Blizzard updated Guild Crest interface? what do you think they can do to improve it? what icons do you want Blizzard to add?

Have they ever updated it?

I mean, I don’t go designing Guild Crests a lot, but the last time I did it looked exactly the same as it did when I used it back in Vanilla. (I don’t wear tabards very much, if at all, so it’s not like it matters to me.)

if I were going to make a change I’d add some WoW icons to the potential tabard graphics, like the various ability buttons we get. I love the Rampage screamy face and I would wear that on a tabard.

Q4tQ: do we know if the order hall armor sets will be further upgradable in 7.1.5? I like the set bonus but have better ilvl.

I haven’t heard anything about the class hall armor sets being upgraded any further.

Q4tQ: So, the only way to get these Winter Veil skins and mounts in Heroes is to buy them through one of the bundles? Looking at the Winter Veil Classic bundle there are a few I would like, but not all.

As near as I can tell the answer to this is yes. If there’s another way to get those skins I don’t know what it is.

Question for the queue:
#1( this is main for you Mr. Rossi) do you think that Shalamayne would have been a better artifact for arms warriors, or maybe the two handed version for fury?

I know you don’t like answering two questions from the same person, but here it goes.

Your Demon Hunter question got answered pretty accurately so I’m just going to talk about Shalamayne.

To answer you, not really. I mean, I’d have freaking loved to get that sword, no question. But it’s a Night Elf made set of two swords combined by Dragon magic and used by a famous Human king. It’s kind of even harder to justify that thing in Horde hands than it would be to justify Strom’kar, you know? And can you imagine just how ticked off some Alliance players would be to see Varian’s sword in an Orc or Troll’s hands? Yeah, I don’t think that would have flown too well.

Honestly, I really feel like Warriors are the one class that should have had faction specific Artifacts. Horde getting Broxigar’s Axe or something like that. Maybe that’s asking for too much, but while I don’t feel bad seeing a Blood Elf use the Ashbringer, I absolutely would seeing a Forsaken use Shalamayne. That’s Varian’s sword. It shouldn’t be in Horde hands.

Still, I can’t help but feel like it would have been a perfect Warrior Artifact. Heck, I’ve seen Varian pick up a shield and use Shalamayne with it in Heroes of the Storm, so maybe Horde could have gotten three unique Artifacts and Alliance could have just gotten Shalamayne — use it as a 2h as Arms, as Shalla’tor and Ellemayne in Fury, and with a shield in Protection. That would have been cool.

Okay. It’s getting close to Christmas and both Alex and I have new books out. Buy them, please, or talk someone else into buying them. I normally wouldn’t hard sell like this, but it’s getting close to the wire for holiday sales and they’re both good books that could use your support. Plus I’m crazy old so it’s that or I sit you on my knee and tell you stories about when I and Dakotaraptor used to run Molten Core uphill both ways in the snow.

Blizzard Watch is made possible by people like you.
Please consider supporting our Patreon!
Filed Under: Grouping
Advertisement