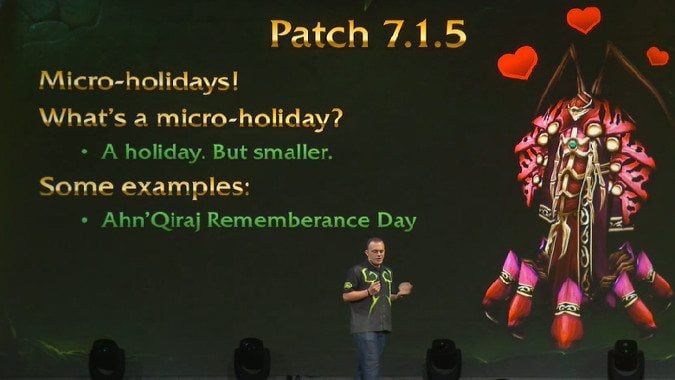 Micro-holidays for World of Warcraft were announced back at BlizzCon 2016 and they’ve been in testing on the PTR in recent weeks. However, we didn’t know exactly when they would take place until now. Blizzard has listed all of them, along with a short description of the holiday, over on their official website. A quick rundown of the dates are as follows:

These micro-holidays aren’t meant to be a big deal, but rather small events intended to make the game world more lively. If you miss any given event, you’ll miss out on minor rewards at best — maybe some toys, but (as far as we know), nothing you won’t be able to get the following year. Blizzard has specifically stated there will be more micro-holidays to come; this is just the first batch. The latter half of the year will undoubtedly receive its own micro-holidays, too.

Blizzard Watch is made possible by people like you.
Please consider supporting our Patreon!
Filed Under: Micro-Holidays, Patch 7.1.5
Advertisement