The Queue: It’s alarming how Guarm-ing I feel 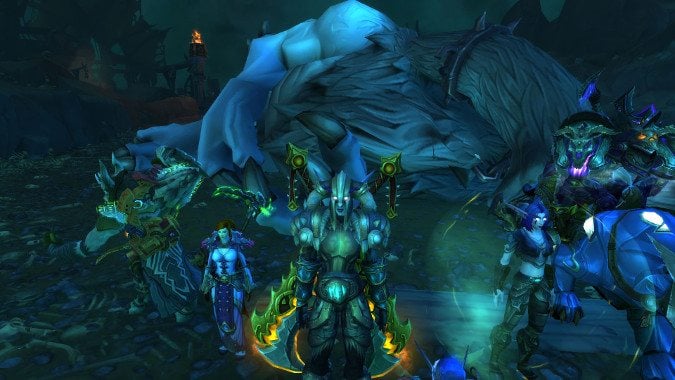 Don’t be a-Guarmed. Today’s Queue is proceeding as normal, and I Guarm-antee nothing will go wrong. But I Guarm you, I may be stuck in a pun cycle.

Trust me, you’ll Guarm up to them eventually. Forewarned is Fore-Guarmed.

It strikes me that Kurtalos Ravencrest is entirely un-elflike. He said “Better late than never, eh, lad?” It’s a very human or dwarven phrasing (especially punctuated with the ‘lad’).

What’s especially ‘Human’ or ‘Dwarven’ about ‘Better late than never’ that it seems unusual for an Elf to say it, especially 10,000 years ago when they weren’t immortal?

I’m not trying to be difficult here. I’m currently playing a Night Elf Warrior (I’m sure we’re all sick of seeing screenshots of her) and when I RP her (which I do) she’s sarcastic, arrogant, a trifle snotty, very brave (perhaps ridiculously so) and utterly dissatisfied with Night Elf society. She’s not a fan of Malfurion or Tyrande’s leadership, would very much like to see Shandris or even Maiev take over, and isn’t really sure what to make of all these Humans, Dwarves, Gnomes, Draenei, Worgen (didn’t we fight a war to get rid of those guys) or Pandaren she finds herself surrounded by. She’s only a few thousand years old, and she absolutely doesn’t know everything about Nelf history.

I think she’d be find saying ‘Better late than never’ especially to cover her own ass when she lost track of time and showed up late for something. My DK is also a Night Elf, but she’s dead so her priorities are different and I rarely get to RP her anyway.

Any culture is made up of individuals. Night Elves are no exception, and Kur’talos Ravencrest was a distinct and important figure in Night Elf culture… over 10,000 years ago, before the Sundering, before the Priesthood of Elune assumed control of their society, before Druids were more than a few malcontents led by Malfurion. Lord Ravencrest was a military leader of a society much more grounded in arcane magic and materialism than what Night Elves are like today. He had more in common with the Nightborne of Suramar than the Night Elves of Darnassus. That doesn’t make him any less an Elf, it just means that in his time, what being an Elf meant was very different.

I mean, to put it into context, there’s debate about whether or not we can truly say Human civilization on Earth existed 10,000 years ago. There were no High Elves, Blood Elves or Nightborne yet when Kurtalos was alive, and the Night Elves as we know them were entirely different. It’s not surprising Kur’talos acts differently. To him, Malfurion is just his protege’s twin brother and Tyrande is that nice priestess girl young enough to be his daughter.

Q4tQ: The “loot spec” system seems to have outlived its usefulness. It seems like a lot of loot objects ignore it now. It’s hard to tell what it even applies to in Legion. Is it time to dump it?

If you could get it to affect what Relic I get from a World Quest that would be great.

In general, though, I think it may be time to rethink the system. I use pretty much the exact same gear as Arms, Fury or Prot. I even share relic types between Artifacts to a degree. With gear switching between Agility, Strenth and Intellect (or Agility/Intellect and Strength/Intellect) it really feels like it’s not doing much of anything and the gear I get in dungeons/raids seems utterly unaffected by it.

I honestly feel like the current system when all my rings and necklaces lack a primary stat has only served to weaken the Loot Specialization feature further.Considering that they just made it so you need more of each stat to get a 1% increase, I really miss Primary Stats on necks and rings.

The Felsworn Must Fall WQ is probably the worst WQ at the moment. It’s a small tower area on the Isle of the Wardens, requires you to kill 6 adepts, 6 defilers and 3 betrayers. Sounds simple enough but the Betrayers doesn’t spawn often enough, and when there are a LOT of Alliance and Horde in one place.. it’s tough to tag a Betrayer in time.

For my 3 Betrayers, I finally joined a premade group and got it done, but it took nearly an hour. I wouldn’t recommend it, even for gear (which turned out to not be an upgrade for me in the end.. blah).

There are actually two towers on the island where you can find the mobs for this quest. They’re both up, and the second one is a lot harder to find and get to (you have to get around those elite spider mobs and spider demon mobs) and there’s only one Betrayer in that tower, but it’s there.

My problem was that the mobs weren’t pulling in a reliable fashion. My wife and i managed to kill a Betrayer, but it was a nerve wracking experience as people kept coming in, pulling him outside the tower and causing him to evade and reset. Why can’t we pull him out of one of the towers, but not the other? I have no idea.

I’m not a fan of this world quest is what I’m saying.

Q4tQ: My guild just got our cutting edge achievement for Xavius. Going into this expansion I had no intentions of being a mythic raider, but I met a group of people who were determined enough and now, here I am licking my chops anticipating Nighthold’s release. What were your intentions going into Legion for how you would enjoy the game? Has anything changed?

I wanted to be able to play it at all.

My eyes being what they are, that seemed slightly optimistic. I’m absolutely not a Mythic raider anymore, but I’m managing to go on some raids and enjoy what I’m capable of doing with the eyesight I still possess. It’s not ideal but we kill stuff and I get to see it. That’s pretty much all I wanted.

QFTQ: One of Watcher’s stated goals for the Dev team is to not make players feel less powerful. How do you think they will accomplish with us losing our artifacts at the end of Legion? (Ion stated this in one of the Q&As…maybe even at BlizzCon) We will be losing a TON of abilities and buffs with the loss of our Artifacts. Do you think they might bake those bonuses into the spec? I feel like that makes the grind for the abilities pointless but I’m fine with people who skip Legion getting that power as a story piece.

This is something I really wonder about. For one thing, how do we ‘lose’ our Artifacts? Do we get to keep them, but they get superseded by more powerful items? Do we destroy them to seal the portal and stop the Legion? (Wow, will a lot of Paladins freak out if they have to blow up Ashbringer.) And as you pointed out the Artifacts are essentially an entire level of player progression at this point. Giving one up is like losing a Guarm.

But to get back to it. I really feel like this is a problem that needs a solution and I hope Blizzard has one. I really have no idea if we’re going to go back to getting weapons in whatever comes after Legion, but it feels strange to put Strom’kar in the bank and just use random demon axe again. Maybe the answer is not to do that, I don’t know. Would people accept just using their Artifact forever from here on out? Or would you rather go back to picking up whatever green item fell when you chopped a dude’s head off?

Okay, that’s the Queue for today. Hope y’all have a good weekend, and I’ll see you Tuesday.

Blizzard Watch is made possible by people like you.
Please consider supporting our Patreon!
Filed Under: Guarm
Advertisement