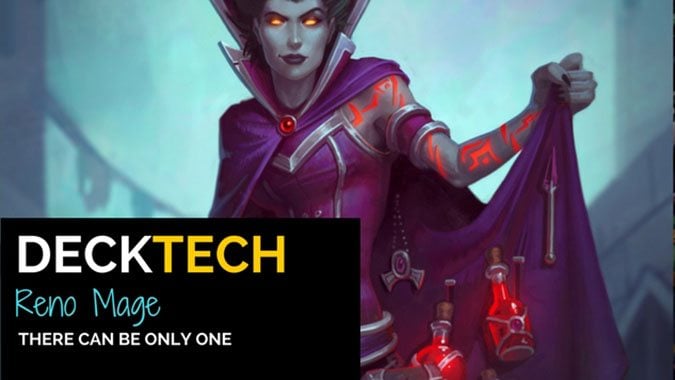 I should warn you that Reno Mage isn’t exactly an affordable deck to put together. There are 8 legendary cards in here but 3 of them are from adventures. Enjoy the deck while you still can as there are only a few months to go before Reno Jackson rotates out of Standard and the viability of this deck is up for question. I’ll be the first to admit that I’m not the best expert at playing Reno Mage, but it’s certainly something new that’s hit the scene ever since the release of Mean Streets of Gadgetzan.

Unlike Reno Lock, Reno Mage provides cards with added flexibility, allowing you to adapt your game plan to your opponent between cards like Babbling Book, Kabal Courier, and Cabalist’s Tome. You can play Alexstrasza and then nuke them with whatever spells you have remaining. Out of spells? Create more Fireballs with the assistance of Archmage Antonidas. Not to be outdone, Inkmaster Solia can change the direction of a game by giving you the opportunity to play a spell for free.

Note: Exercise caution with Cabalist’s Tome. It may give you a spell like Roaring Torch. If you’ve played your Forgotten Torch earlier, you may have two copies in your deck, and Reno won’t activate. 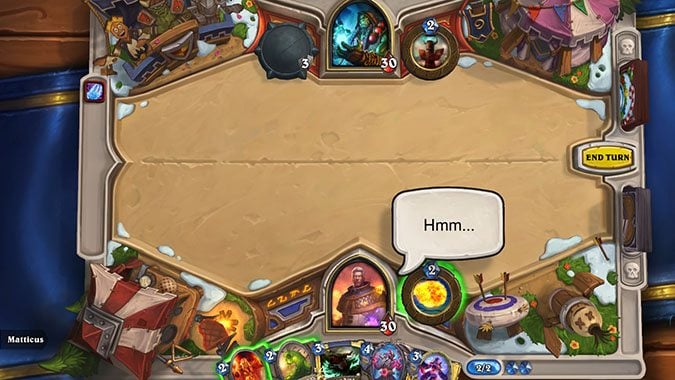 This is a fantastic mulligan. Doomsayer and Frost Nova insurance. There’s an Ooze that can eliminate the Spirit Weapon. Kazakus and Kabal Courier provide even more options.

Always keep Reno Jackson if you see him. The rest of the cards you want to keep are largely going to depend on what you expect the match to be like. Against aggressive decks, hold on to Doomsayer, Arcane Blast, Babbling Book, and Mistress of Mixtures. If you’re up against a weapon class — like say, Pirate Warrior — Acidic Swamp Ooze is another solid option. If you’re playing against another Reno deck, or something slower and more control oriented, you can afford to keep cards like Arcane Intellect, Kazakus, and Kabal Courier.

Your opening moves are generally going to be fairly simple. Survive out as long as you can until the late game. Stall out or heal through incoming damage. Hero Power whatever small minions you can. Mistress of Mixtures, Doomsayer, and Frost Nova can help. Volcanic Potion can assist you in clearing the board on turn 3. Save Arcane Blast for anything troubling and you can pair it with Bloodmage Thalnos to give it a quick spellpower pump.

As you start entering the later turns, it’s time to start laying down the groundwork to finish off your opponent. If your health is in jeopardy, play Reno immediately on turn 6 to buy you time. You have Ice Barrier and Ice Block to grant you extra turns. Ice Block gives you that extra level of confidence you need to play in a more assertive manner, and you can follow it up right away with Reno Jackson. If you haven’t played Kazakus, you can pair Brann and Kazakus together to get two potions that suit the game state. It’ll be difficult for me to run through all the different combinations, but I prefer going for expensive spells with spectacular effects. In your case, figure out what spell or set of effects you’re looking for prior to playing Kazakus! Keep controlling the board with Blizzard or Flamestrike as needed. 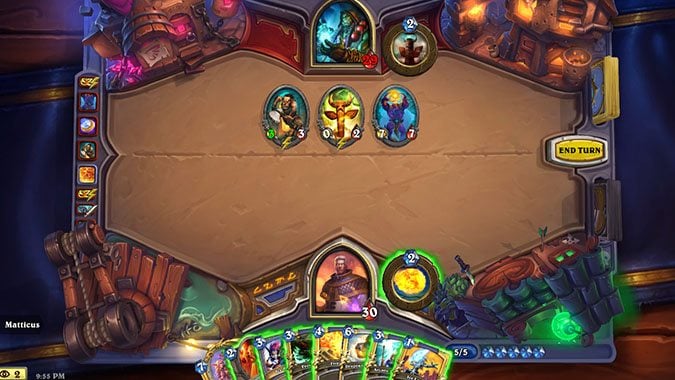 Polymorph should be reserved for anything that you can’t immediately contain or kill. A turn 4 Flamewreathed Faceless is a good target, or any Mountain Giants that happen to sneak onto the board. But you only get one Polymorph, so use it when it counts.

Now that you’ve survived into the late game, you can start hitting back. You have your big hitters like Archmage Antonidas, Inkmaster Solia, and Alexstrasza. Ideally, you want to pair Inkmaster with something devastating and expensive to really maximize it. Inkmaster with Flamestrike is a good start. Or you could just Inkmaster with Firelands Portal to remove an opposing minion while adding one for yourself.

In most cases, your win condition is going to rely on Antonidas to generate some Fireballs for  you. Try not to play him on curve unless you can guarantee his survival. If you can generate even two or three Fireballs, you’ll take the game. Alternatively, if you manage to have a few spells saved up, you can simply play Alexstrasza on your opponent and then nuke them down with your remaining spells (and minions on the board). 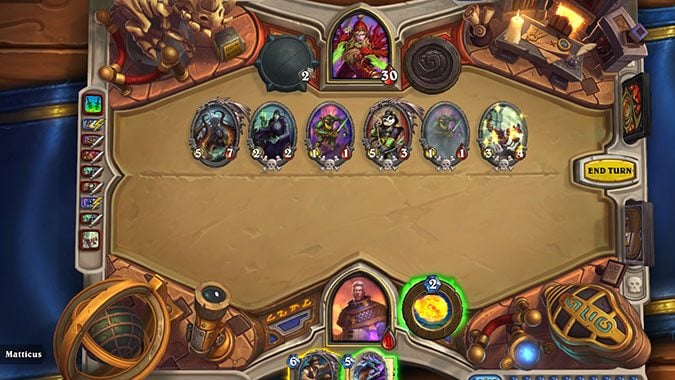 Deathrattle Rogue managed to just overwhelm me here. I ran out of answers.

Dirty Rat is just one of those cards that can completely mess up your opponent. You can sub him in and use him to potentially sneak your opponent’s Reno Jackson on the board — and his effect won’t trigger! For more hilarity, play Brann into Dirty Rat and pull out two key minions. Most players would forfeit if you can score Doomsayer and Reno from their hands.

As for other alternatives, many of the cards above are self-explantory. Acolyte of Pain helps to provide a little more consistent card draw. Mind Control Tech is fantastic against Jade decks, especially Jade Druid, where you can possess one of their monster Jade Golems late game. The Soulcaster can be combo’d with Brann and Kazakus to net you more custom cards. Water Elemental is a great 4 drop if you find that more minions are needed. Refreshment Vendor adds more health. Burgly Bully gives you coins when your opponent plays spells, which plays right into Archmage Antonidas. If you don’t have Alexstrasza, you can run Medivh, who can help put you in excellent position next turn.

Druid: For the Druid player, their primary win condition is to overwhelm you with an infinite amount of Jade Golems, which can be done by cycling and drawing Jade Idol. You won’t be able to go toe to toe because you don’t have an infinite number of spells to combat all those Golems. Kazakus has a Polymorph all Minions spell you can create, which will come handy here. Consider subbing in a Mind Control Tech. You need to play aggressive, because you can’t sit back and let them play their Golems.

Hunter: Still no sign of Hunters anywhere on the ladder. But you can’t go wrong by keeping Reno, as he’ll be able to outlast anything coming your way (or any other health restore).

Mage: Welcome to the mirror matchup — that is, unless you’re playing against Tempo Mage. If it’s Freeze Mage, look for Reno to provide you with security. The Reno mirror has many different aspects to pay attention to. Both you and your opponent are looking for Kazakus. I’ve noticed some Reno players end up using Medivh, so holding on to your Ooze is the right thing to do. Don’t overplay your board either.

Paladin: The Paladin matchup doesn’t seem to be as prevalent. If it’s Murloc Paladin, you need a response against their horde of Murlocs (a la Flamestrike or an Ice Block). If it’s N’Zoth Paladin, don’t let N’Zoth hit the board if you can help it. Hold your Polymorph against Tirion.

Priest: The biggest enemy in this deck here is their Shadow Word: Pain. It can knock out your Doomsayer when you need it the most. Go after their minions early on like Twilight Whelps and Wyrmrest Agents. This is a tough matchup for sure. Drakonid Operative can steal something potentially awesome from your deck. 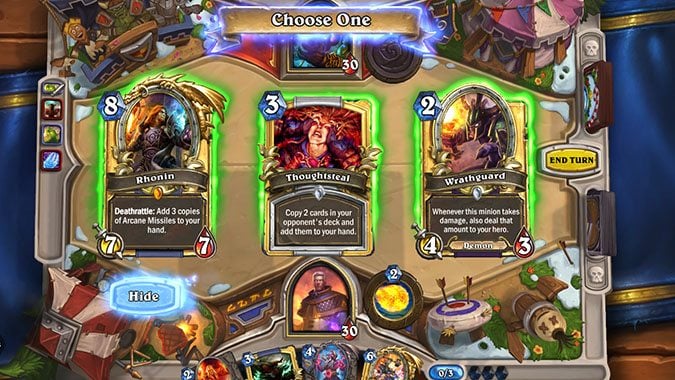 I couldn’t not pick Rhonin in this suite of Kabal Courier cards.

Rogue: Go hard after their minions, as most of their deck consists of spells. Have some answer to Gadgetzan Auctioneer when it lands on turn 6. Kazakus can provide you with different methods of handling a Concealed Auctioneer. If you don’t draw into the removal you need, you have your stalling spells until you can grab Flamestrike or a Polymorph. If you can contain their minions, you’ll be able to secure the win.

Shaman: Your board clearing spells will shine here. Eventually, Shaman decks will run out of steam, allowing you to take back the board. Hold your Ooze against Aggro Shaman to play it against their Doomhammer. If you don’t think there’s a Doomhammer, you can probably use it against lesser weapons. Shaman burst potential is far reaching, so keep a close eye on your health total.

Warlock: Against Reno Lock, their big move is going to be on turn 4, which is generally when a Twilight Drake or a Mountain Giant will hit the board. Save your Polymorph for that. Try to force their Reno to come out earlier. Generally, you’ll be able to win the long game more often by simply nuking them down with your spells, or if the game goes to fatigue. Jaraxxus won’t be a problem for the first while he’s out in play.

Warrior: Reno wins you the game. Slow the game down a bit and think about your turns, especially if it’s Pirate Warrior. This is a great match to use Water Elemental as a substitute. They can’t hit you with buffed weapons if they’re going to be frozen the whole time. Save Arcane Blast and Frostbolt for the Small-Time Buccaneer. Dragon Warrior can be harder to handle because of their late game minions. Clear the board or gain control of it before playing Reno, or else you’ll fall behind again.