The Queue: Baine among the Highmountain 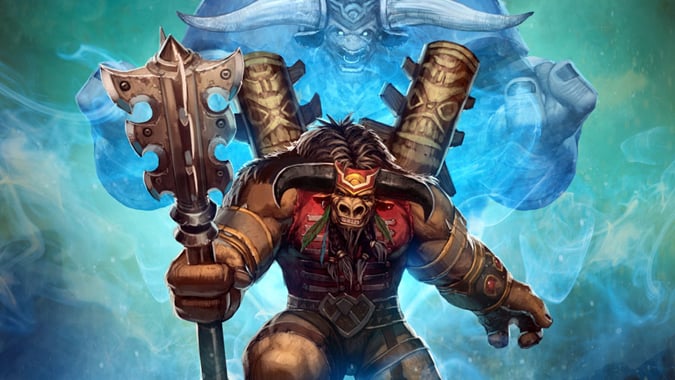 Since I’ve been archaeologing again, I’ve noticed every now and then a glowing shovel will appear over my head. I managed to figure out that shows up when I’m in range of the fragments.

Has anyone else noticed that? Is that a Blizzard thing, or an addon?

That’s a Blizzard thing and was introduced in Legion. You’re correct, it means you’re sufficiently within range to your fragments to actually find them. When you see the shovel, dig. You’re standing on what you want.

What’s one of your dream features for Wow? In other words a feature you really want but probably will never happenen. One of mine is being able to queue for a dungeon or raid on one character and play on another while waiting for the queue to pop. That way I can level alts while waiting in those awful hour long queues.

Player housing. A space that is mine to be customized as I please. While being able to build freeform in a sandbox would be awesome, I’d also accept prefab structures I could decorate at will with furniture and all that. WoW has a lot of collection-oriented activities like pets and mounts, but those don’t really appeal to me. If I could scour the world for decorations for my house? I’d totally do that. Some of it could be craftable. Some of it could drop off of bosses. Make me grind out Magisters Terrace for Blood Elven furniture; I’d do it.

Even if the feature’s sole purpose was vanity with no in-game rewards, no herb garden or mine or fishing pond, that’s fine. I just want to create a space that’s mine within WoW.

Does Baine actually appear in the Broken Isles at all (that I missed), or is this future speech for some other version that got added wrongly – like the dying Tirion in ICC?

This is a relic from the Highmountain quests in Legion’s beta. Back when the questing in Highmountain involved Wrathion, it also included a number of notable Tauren figures. In the quests where you take Mayla Highmountain into Nelthartion’s lair, she used to be accompanied by Baine Bloodhoof and Aponi Brightmane. The problem with those original quests was they didn’t take the timeline or logistics of the Broken Isles into consideration. If I remember correctly, those quests were originally written as if the ritual to confirm Mayla as Chieftain required Chieftains from other tribes to be present. It suggested before Mayla, other Highmountain Chieftains also had assistance from Baine’s ancestors and so forth. That wasn’t actually possible. They couldn’t have been there for that.

That said, the quests were pretty neat. Mayla was there to do her thing, you were her backup, but she also had assistance from Ebonhorn, Baine Bloodhoof, and Aponi Brightmane, all providing color commentary. They simplified it down to Mayla, Ebonhorn, and you. All of the commentary provided by Baine and Aponi was lost. They also, of course, changed Ebonhorn’s identity. Originally, Wrathion was masquerading as Ebonhorn, but the timeline didn’t work for that, either. They turned Ebonhorn into a brand new black dragon.

Do you think that the HoTS events for Ovr and WoW are doing good things for the HoTS community, or are they just innundating the games with people who don’t care and bring the collective experience down?

I think these promotions suck for the Heroes community in the short-term but are great in the long-term. While the promotion is going on, it feels like every single match you play is bogged down with people who don’t care about anyone else and just want their mount. People who don’t realize they can earn quest credit on the vs. AI game mode will group up, queue up, and intentionally lose a real match to try and get it over faster…when that’s not even the fastest way to do it.

I also admit I get frustrated when I can’t tell whether someone is intentionally throwing a match or just don’t know how to play. If I’m able to tell someone is struggling, I’m happy to help them, but sometimes it’s genuinely difficult to figure out if they’re trying to throw a match or don’t know what they’re doing. If someone is wandering aimlessly around our half of the map, barely pushing any buttons… you kind of expect someone to at least know how to push Q to cast a Frostbolt, you know? But maybe they don’t. Those players are indistinguishable from someone who’s just being a jerk.

Eventually, the people who are just being jerks finish their quest and move on. The people who want to learn get better at the game. The people who genuinely enjoy the game stick around — and they might not have discovered they enjoy it had they not been enticed to play by the promotion. Long-term, that means these crossover promos are pretty great.

The frustration in the short-term is off the charts, but it’s worth it for those long-term gains.

What happens if someone has a really good question that is so deserving of an answer, that it seems like it has literally been written for you to answer but you don’t because you don’t see it, as you completed the Queue early?

It depends on the definition of “early.” I started writing this Queue yesterday, but right now, it’s 10:31 a.m. on Monday. This thing publishes in 29 minutes. For me, that’s pretty standard. Certainly, I don’t try to wait until the last minute, but oftentimes I feel there aren’t enough questions answerable by my skillset until I’ve given the comments a full day to do their thing. I tend to avoid questions that require really niche lore knowledge not because I lack that information necessarily, but I know I’m not that passionate about that part of the game. However, the sorts of questions answered by previous others tends to kick off a trend.

For example, I follow Rossi and Anne. Because Rossi and Anne answered questions, people (maybe not consciously) ask the same sorts of questions even though those two will not be answering questions in the following Queue. However, the person who follows me is less likely to get those nitty-gritty lore questions because I didn’t answer many of them.

I’d say, because of the cycle of how people ask questions, it’s unlikely for us to get those “perfect” questions unless we’ve directly solicited those sorts of questions.

If it does happen that we miss the “perfect” question because we wrote the Queue early… well, like I said, it depends on what early means. If someone asks the perfect question in the next 20 minutes, maybe I’ll see it for next time. Maybe I won’t. It’s more likely the next person writing The Queue will see it. If I don’t, then it probably should have been asked earlier than that. That probably sounds snide, but it’s not meant to be. That’s just a publishing schedule, yknow? Things need to get written so they can publish on time.