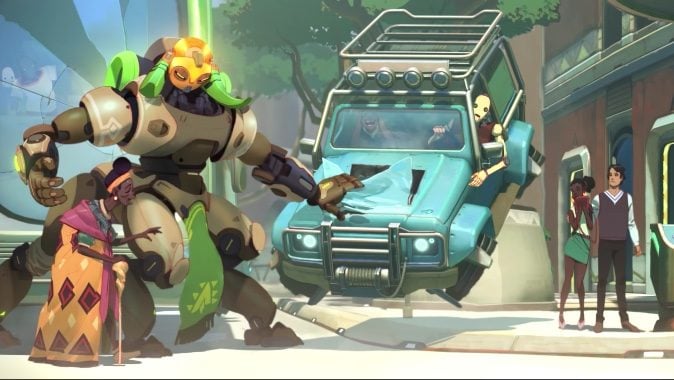 After much speculation around Efi Oladele, we have our answers about the next hero to hit Overwatch: Orisa, a security robot built by Efi herself. And today, Orisa is live in game for everyone who wants to play this new tank.

Jeff from the Overwatch team details her origin at the beginning of his latest developer update, but if you want an in-depth look at her origin — and just how Doomfist ties into the story — you should read our Orisa Know Your Lore. Of course you could get the basics in Orisa’s announcement video, too.

Orisa’s hero page is already available on the official Overwatch website, but here’s a rundown of her abilities:

Take one part D.Va, one part Zarya, one part Symmetra, divide by Ana’s Nanoboost, and you end up with Orisa. Jeff Kaplan goes into detail about how these abilities work in his dev update.

Blizzard Watch is made possible by people like you.
Please consider supporting our Patreon!
Filed Under: Efi Oladele, New Overwatch Hero, Orisa
Advertisement