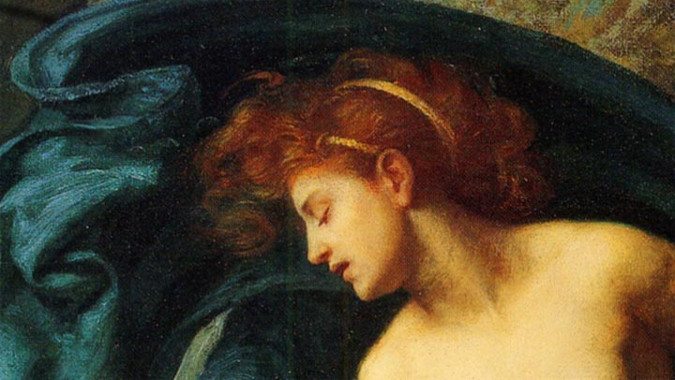 In Greek mythology, Andromeda was the daughter of Cepheus and Cassiopeia, the rulers of Aethiopia. After her mother boasted that she was more beautiful than the Nereids, the god Poseidon (who the Nereids served as handmaidens) was so offended that he sent the sea monster Cetus to ravage the coast of Africa until her father chained her naked to a rock so that the monster might slay her and satisfy the god’s vanity.

Luckily for Andromeda, the hero Perseus just happened to be heading home after having killed the gorgon Medusa and noticed a naked girl chained to a rock. Even for someone who killed gorgons, it’s not every day you see a naked princess chained to a rock, and so he stopped to investigate. One thing led to another, and soon Cetus was dead and Perseus was proposing marriage. Being that her family had chained her to a rock to be eaten by a sea monster, Andromeda was no longer willing to marry her original betrothed. Which was her uncle Phineus.

Anyway, one thing led to another, Phineus and a bunch of his buddies crashed the wedding, Perseus turned them all to stone, and Perseus and Andromeda went to save Perseus’ mother Danae and settled in Tiryns, a city in Argos, where they became the founders of a dynasty that would include such famous and powerful descendants as Heracles. (Incidentally, Perseus was the son of Zeus, as was Heracles, meaning that Zeus came back and slept with his own great grand-daughter.) The name Andromeda comes from the Greek words for ‘ruler of men’ denoting her royal lineage and her position as the founder of a dynasty.

What? Everyone’s talking about Andromeda today, I figured I would too.

Love to see Vale of Eternal Blossoms reverted to its pre-Garrosh beauty. But yeah, Cata zones/effects probably a close second.

I used to feel the same way about the Vale, but nowadays I think there should be some lasting results of what happened in Pandaria. The Sha corruption? That should be gone. But we came to Pandaria and we changed it, and its destiny, forever. We wreaked havoc, but we also destroyed the Heart of Y’Shaarj once and for all and ended the thing that created the Sha in the first place, meaning that the Sha are gone — they won’t be returning to existence when destroyed. The Sha are no longer eternal, and as a result, Pandaria will see them dwindle and ultimately die out.

That’s a huge change, and it should be reflected in the Vale and in Pandaria as a whole. The dark secret at the heart of the continent, the thing that Emperor Shaohao failed to deal with, has at last been rooted out. So I want to see that reflected in the Vale. The corruption should be cleansed, the land restored to a degree, but we must never forget the cost of what happened.

Let’s get real. If Blizzard decides it would be a better story to kill Anduin off tomorrow, they’ll do it and the comic will be ‘oh, it was just one of many possible futures’ so fast it’ll make our heads spin. I’m not saying they’re going to do that. They seem pretty determined to build Anduin up as a big deal Alliance lore wise. But I don’t imagine for a second they feel constrained by that comic.

QftQ: I know more than a few readers are asking for a post to discuss spoilers (in Chronicle volume 2) to our hearts content, much in the same vein that you guys did for Starwars, except this would be Blizzard related. Any chance this will happen? It would definitely give people who’ve read volume 2 a chance to geek out with other readers and lessen the chance something unfortunately slipping out, in say, the queue.
Can we have a full on spoiler post? Pretty please? Feel free to put up as many spoiler warnings as possible so there’s no mistake of someone reading something they don’t wish to.

We’re going to do a LoreWatch episode all about Chronicle Vol. 2, and when we do, we’ll allow spoilers in the comments of the LoreWatch post. So it’ll be a week or two but we will be doing that.

NOT AN ACTUAL QUESTION, BUT ALEX TALKED ABOUT GNOMES

So, Matt, what do you think about Gnomes?

I’ve always really liked Gnomes. One of the things I like about them is how they combine such divided aspects — they’re terrifyingly brilliant, smart enough to actually learn divine magic and the Holy Light through pure intellect and just suss out Priests without being invited to join any Priesthoods as such. Yet they’re also fairly warm, friendly, and good humored, laughing at life and all its improbabilities, and their descend from the Titan Forged Watcher Mimiron who madethe first Mechagnomes in his own image. Plus, when Mimiron was murdered, his creations then made him in their image, creating a body to house his spirit.

I’ve always wanted to do a story about what would happen if the Gnomes got serious about changing the world. Imagine if someone like Gearmaster Mechazod found and rebuilt Sicco Thermaplugg and led a host of reconverted Gnomes on a crusade to convert all of Azeroth to a shining paradise of mechanical purity? You’d laugh at first, until they took over Ironforge and drove the Dwarves into exile for fear of being turned into robo-Dwarves.

You could do a lot with Gnomes. Ulduar’s Spark of Imagination is still maintained by Mechagnomes, the ancestor to modern Gnomes, and I’d love to see some of that reflected in Gnomeregan. Imagine a new surface city built using Ulduar technology that the Gnomes reverse engineered just like they did the secrets of the Holy Light.

QftQ: I’m sure this is monumentally difficult for Blizz to implement, but is there any way or chance that they could further remove the server barriers to guilds and social chat? Aside from world-wide server mergers of course.

The last server mergers we had definitely helped, but I’ve still got a ton of old alts on about 4 other servers that I’d love to add to the Horde & Alliance OtQ guilds. :)

They always could do so, but people complain that it dilutes server community and makes farming harder to merge servers, so it’s a balancing act. Some games have effectively one big server for this exact reason, but World of Warcraft started back in 2004 when things were different. I’m not sure how difficult a challenge it would be technically.

Okay, that’s the Queue for today. I often wonder if Andromeda wishes her mom would have just shut up about how pretty she was.

Blizzard Watch is made possible by people like you.
Please consider supporting our Patreon!
Filed Under: Andromeda, Greek Mythology
Advertisement