The Queue is totally done with Monday 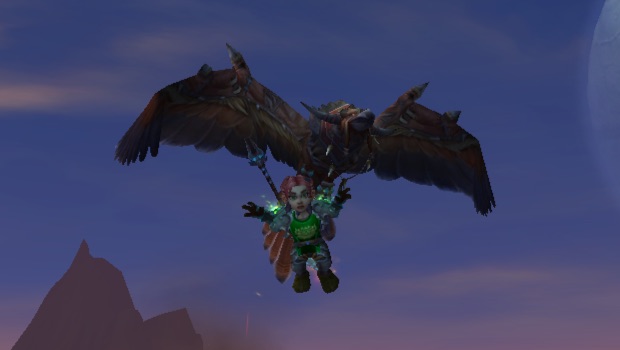 Hello, dearest Queuevians. If you are reading this on Monday, no doubt you, too, are also totally done with Monday. And if you’re reading this from a place or time where it is not Monday then congratulations — and could you invite the rest of us over? Because Mondays, dang.

old IRL friend wants me to come back to wow but also join an old guild i left in iffy terms. It would be a server change. Wat to do

If you left the guild once, there had to be a reason — whether you not liking them or them not liking you. The first question I would ask is whether the guild has changed and is now a group you’d enjoy playing with. If new leadership has come in and changed the guild’s direction, maybe it’s a good fit — but you’ll have to do some investigating to find out whether whatever issue caused you to leave in the first place is still going to be an issue. (Though if it was something more along the lines of an impulsive /gquit on your part that you later regretted, an apology can go a long way. We all make rash, not entirely wise decisions now and then.)

If you know anyone else in the guild, now would be the time to catch up with them to ask about guild life. And if you’re seriously considering it, chat with an officer about whether you’d be welcomed back. (Because transferring just to find out you can’t get a guild invite would be the worst.)

The important part here isn’t your friend: it’s you. If you server hop to join a friend in a guild that you don’t like, having one friend there isn’t going to help. In my experience, the fun is about who you play with… and a lot of that’s your guild. If your guild makes you miserable, you’re a lot less likely to log on, friends or no.

But if you are set on transferring, the character services sale is the right time to do it. Blizzard hasn’t had one of these in a long while, take advantage of it while it lasts!

If I don’t log in on Monday will I be behind for the rest of the expansion?!?!?

Tuesday, Scott, patches come out on Tuesday. And yes, probably.

But sarcasm aside, that’s how I always feel when I step away from Warcraft for a while. There’s so much to do in Legion that it’s very easy to feel like you’ve fallen behind the curve (like the poor fools who only have one Legendary, or, worse, no Legendaries).

However… I’m probably going to do my best not to log on this Tuesday. I know, I know, it’s patch day and there’s all sorts of exciting stuff happening. But a new patch also means new bugs, huge crowds, and plenty of frustrations. The WoW team has been getting patches online in record time lately, but that doesn’t mean there won’t be crowds or bottlenecks. In my opinion, skip the crowds, log on Wednesday, have fun after the servers are stable and the first round of inevitable hotfixes has gone up.

Q4Q: Do you plan to pick up Starcraft: Remastered?

In terms of Blizzard franchises, I was a Diablo fan, a StarCraft fan, and then played Warcraft because it was enough like StarCraft to be fun even though I was kind of indifferent to the fantasy setting. (Zug zug?)

I really would have been way more excited about World of StarCraft than World of Warcraft, but we got World of Warcraft and more than a decade later I’m still immersed in it.  And while I’m all for nostalgia, I don’t always think you can go back and enjoy these things the same way.

I’ve tried with Diablo, but playing Diablo 1 or 2 these days… it’s clunky and dated. It’s not the game I remember anymore, because it’s so many years later. Game design has changed — and I’ve changed. Even with revamped graphics… I don’t know that I’ll give it a try.

How long do we have to listen to those children in Stormwind fight over toys?

You would have thought they’d’ve grown up by now, but apparently not. Stuck forever in childhood, replaying out this same argument on an infinite loop. It’s like some kind of horror story. Perhaps we should hope the Legion kills them in an attack to free them from this tedium.

What would be your pick for next the next root vegetable to get the battle pet treatment?

Okay, I hear you about the root vegetable thing, and @WarcraftDevs on Twitter said the same thing with regards to these battle pets.

Needs to be a root vegetable.

How about a "Daft Daikon"? https://t.co/ZcsdGbdyAn

However, I am with Nuru, who brought this crucial matter to the devs’ attention in the first place.

Hey @WarcraftDevs There's a Terrible Turnip and a Crazy Carrot, can we have an Outrageous Olive? Please? =D

That’s all for today, everyone. Your regular Queue schedule will be back tomorrow with Mr. Matthew Rossi answering your questions, and I’ll be back on Thursday with Mitch (who felt like playing Zelda instead of answering questions today).

Good luck with the rest of your Monday, Queuevians!

Secret Mitch edit: I beat Ganon and saved everyone, so… it wasn’t so much I “felt like playing” as it was the world needing my heroism and good looks to save it from destruction. You’re welcome, Hyrule.