The Queue: The inexorable forward progress of time 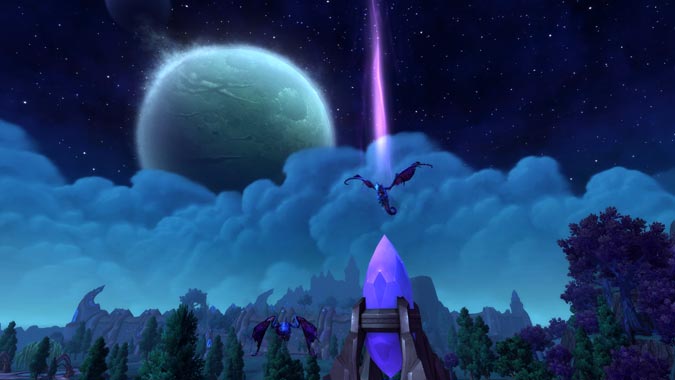 Think I blew out my shoulder, so typing this Queue with one hand and a lot of swearing while the other arm pulsates. Getting old, man.

Shouldn’t the demons on Broken Isles be taggable, regardless of faction? It actually makes sense because we all go down together.

I don’t disagree, but in general I assume they just went with the already established tagging system because they want there to still be some meaning to the factions. I’m on record as thinking the faction barrier is a detriment to people getting to play with their friends — if I like Night Elves and my buddy likes Orcs, why shouldn’t we be able to group up and go kill stuff? But Blizzard clearly disagrees.

If both factions could cooperate on killing demons, well, that would make us better at realizing this is a really bad situation and we won’t be here to fight over Azeroth if the demons aren’t stopped than our erstwhile leaders, none of who I’ve yet seen on the shore. (They might pop up, I just haven’t noticed them.)

What happened to Dentarg, Ogre mage and apprenticed to Nerzul (iirc) Didn’t see him in WoD.

Main universe Dentarg got into a duel of magic with Khadgar, lost, and got decapitated for his trouble.

He did show up in Warlords, where Gul’dan used him to brainwash Draenei to act as sleeper agents for the Shadow Council. This time we killed him.

So the answer to your question is ‘he died.’ For some reason I expected that he escaped somehow — this is a guy who retrieved Gul’dan’s skull, blew up two rebellious Orc clans, I really expected more. But nope, he got into a fight with Khadgar, got beat, and died.

Who built Icecrown Citadel and the surrounding structures?

If you mean “who is the architect who designed them” then I’m afraid I don’t know. The Citadel and the various gates and structures around it are made of Saronite mined out of the surrounding area by the Lich King’s Scourge minions. Essentially, the Lich King had a nearly limitless workforce (we saw them digging the stuff up in the Pit of Saron) which would obey his every command, and he spent that time he sat there not doing much of anything getting them to build that fortress for him. Why? Possibly because part of him was fighting to keep the Scourge occupied, possibly because he wanted to lure mighty heroes to fight him and he knew mighty heroes love to lay siege to forbidding bastions of darkness, possibly out of his own ego.

So really, it could be said that Arthas built them. They all tend to resemble the Helm of Domination he wore, so it’s feasible that he simply commanded the Scourge to build massive walls to flatter himself. But it was the Scourge itself that did the work.

Q4tQ: Do you believe that Warcraft’s story had more narrative freedom as an RTS? As an example; I feel Sylvanas would have either died fighting Arthas, or commited suicide shortly after his destruction (the short story demonstrates a few people at Blizz had similar ideas). Vengeance was, after all. Her entire arc. From a narrative perspective keeping the Dark Lady around in a world without Arthas makes about as much sense as having a Batman, in a timeline where Gotham is peaceful and idyllic. I feel that having achieved their vengeance, her and most of the Forsaken would have been ‘lain to rest’. The rage that anchored their spirits to our world evaporating, and their bodies being left behind to crumble to dust. As an MMO however, the Forsaken are player characters. You no longer have the freedom to write them out of the story like that. Likewise, the Horde player base; has come to view Sylvanas as being ‘their’ faction leader. The players have been instilled with a sense of ownership over the character, and losing Sylvanas wouldn’t be fair to them. Unless the Alliance lost someone to. A player mentality that didn’t exist back in the RTS days.

I say this having achieved it once in my life. There was a person who utterly terrorized me for years. This person bullied me from 3rd grade until 9th. Weekly beatings, mockery, humiliations in gym class. Near the end of his torment of me he and some friends actually  held my face in a puddle until I passed out and almost died. No one did anything — my father admonished me to toughen up, my teachers told me it was my word against his.

Then I had my growth spurt. Went from under five foot three to over six foot, put on well over a hundred pounds. I was unrecognizable. To this day I always have a moment of confusion when I look in a mirror because I look nothing like I expect to look, and it’s been decades.

So I went and found him and got revenge. And it was a fairly complete revenge, too. And after I had it? I didn’t feel better. I was still the kid who’d been tormented for almost ten years by this person, and the fact that I’d done something awful to him in return didn’t change that.

We tell a lot of vengeance stories — the first one I remember reading is The Count of Monte Cristo. But I’d very much not on board with the idea that trauma just goes away once you hurt the person who hurt you. It just perpetuates the vicious cycle and I think Sylvanas and the Forsaken are an amazing example of that. Having been traumatized in a way most of us are simply incapable of understanding (no matter what you’ve suffered, you haven’t been violated that way the Scourge violated them, you haven’t been killed, your soul hasn’t been trapped in a rotting carcass, and you haven’t been forced to obey your murderer) survival is all that’s left to them, and they impose that same nightmarish state on others because they can no longer empathize with anyone.

As to your point about the story in the MMO vs. the RTS, I think it’s not the game that constrains Blizzard’s storytelling. Clearly they can and will kill off popular characters if they think they can tell a better story. The RTS games tended to tell specific stories and then move on — there was a big gap in years between the second and third RTS — while WoW is a continuing story that’s been told since 2004 at this point. We’re not jumping ahead, we’re seeing it unfold as we go. A lot of things happened between Warcraft II: Beyond the Dark Portal and Warcraft III, but since they weren’t part of the story of either game, we didn’t see them. But WoW has essentially been running for 13 years now, and we’ve seen events unfold over that time period.

Blizzard Watch is made possible by people like you.
Please consider supporting our Patreon!
Filed Under: Vengeance
Advertisement