The Queue: We’re off to see the Wizard 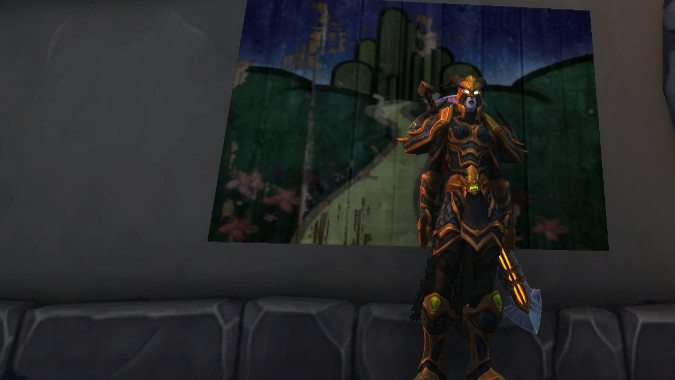 At the extreme other end, I was telling a friend recently that I wished combat in WoW was more like City of Heroes in which — like old-school comics — defeated didn’t mean dead.

Welcome to Legion, where even dead doesn’t mean dead because they’re demons and they keep getting back up no matter how many times you kill them until we close that great stonking portal.

I feel like this could be a case by case thing. Killing Kael’thas only to have him yell at me in Shattrath so I had to go kill him again in Magister’s Terrace was a weird experience, but it meant he was still around to annoy me which is the point. I’m okay with Gul’dan being dead, though. To be honest, I don’t understand why I didn’t hit him with every pointy thing I had the second I saw him.

Question for the Queue: Do we have any lore on the overfiends(the fire demons that appered in WoD), that have the same model as the new firelord from the shaman class hall campaign?

Keep in mind that model was first seen on Baleroc.

There actually is a tiny bit of lore about this. Smolderon sends players to kill Barastagax, one of the demons using that model, and the reason he wants the thing dead is that it can call upon the power of the Firelands as an Elemental would. This is interesting because I’ve always felt like Infernals and Abyssals are similar to Earth Elementals and we see in one of the World Quests that the Legion is calling upon elemental magic and tainting it with the Fel.

So are the Overfiends Fel-tainted Fire Elementals? I don’t know, but it would explain why Baleroc/Smolderon’s model is also found among the Legion’s servants. It could also mean that there are other Fel elementals yet to be encountered. (I know that Infernals are said to be constructs, but they have souls so who knows?) We know that entire races have been transformed into demons by infusing them with Fel magic, I see no reason Elementals couldn’t be as well.

It also might explain why the Elementals at the Throne of the Elements retreated from Gul’dan when he came before them — they sensed in him a danger to their very purpose for existing.

While rerunning Pandaria on an alt, it was my first time Alliance Side meeting Cho. He wants you to paint a picture. The picture you’re painting over? Is the yellow brick road on the way to the Emerald City.

There’s a deeper meaning to this, I just know it. But what? Is Oz accessible through a tornado? Quick! Shaman! Tornado yourselves over the ocean and deserts to test this theory!

Or perhaps Pandaria IS Oz, or was, when it was surrounded by Mist and an idyllic land impossible to get to. The Sha could be the wicked witch….and our arrival upturned it all into the dystopian interpretation of Wicked? Are we Dorothy or Elphaba?

Or perhaps something else entirely. Thoughts?

You heard it here first, the next expansion is The Rage  of Ozma and it’s about how Princess Ozma has been corrupted by the Void Lords and is invading Azeroth. Oh, and it turns out Oz is Azeroth’s sister world, just on the other side of Azeroth’s sun. The planet Oz and the other kingdoms from L. Frank Baum’s works are on is called Ozerath.

What? It’s plausible. I’m looking forward to the Kingdom of Ix myself. We’re going to team up with Dorothy Gale (she’s an adult now, she ends up coming back to Azeroth with us) to fight off the Wheelers.

Think we’ll get the announcement for the next WoW expansion at Blizzcon this year? At that point I’m sure we’ll see 7.3 at least on the PTR with it coming out soon. Time for next expansion hype or too soon?

It’s possible. Part of me wonders. I’m sure they’re already well into working on the expansion, but with the pace of content delivery they’re working on (the big patches followed by smaller ones) I have no idea when they intend to drop it. I certainly wouldn’t be surprised to hear about the next expansion at either Gamescom or BlizzCon this year.

How long does an assault last? It doesn’t seem to be consistent.

Obviously it has a timer when it goes up, and says it is up for six hours. However, when that time is up, the counter will sit on 0:00 for some time after, the zone still in assault mode.

Reading up on it, I saw that it went for 6 1/2 hours, even though the timer only said 6 hours. And one day when an assault was up, I looked in the zone 30 min later, and it was still there. I looked five minutes later, and the zone was back to normal. So that seemed like a reasonable answer.

But then last night there was an assault in Val’shara. I looked at the timer, added 30 min, so I knew when it would end. My wife and I went into the zone to do the dailies. At 12 min after the timer hit 0:00 (so there should have been 18 min left) the elite we were fighting vanished. Look at the map, assault was gone.

How are we supposed to know when that is going to happen?

I don’t think the time after the timer runs out is meant to be there at all — if it was, it would be added to the timer, surely. I have no idea why it’s there. I’d assume they intend the Assaults to last for a set period of time and then end, and there’s some mechanical reason (people still running the scenario, wanting to let a little wiggle room for people who started before the timer ended to finish up) beyond my ken.

I wouldn’t deliberately try and game the timer. Sure, maybe you have that full half an hour, or maybe you don’t. It’s safer to assume you need to be done as close to when the timer ends as possible.

The Assaults remind me of the Invasions that way — I had several of them end only for them to seem to restart immediately.

Okay, that’s the Queue for today. Have a good day everyone.

Blizzard Watch is made possible by people like you.
Please consider supporting our Patreon!
Filed Under: Pumpkins
Advertisement