The Queue: No time to say hello, good-bye 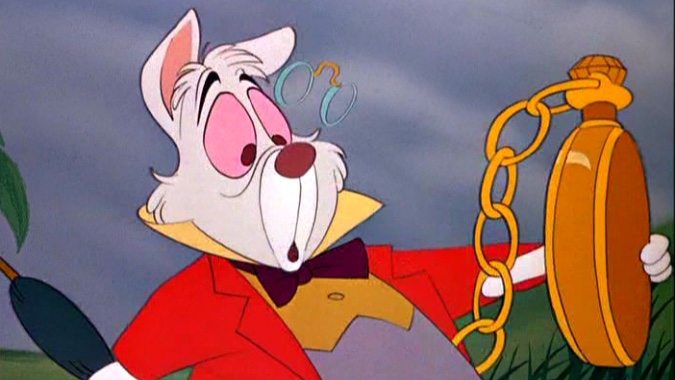 I run and then I hop hop hop,  I wish that I could fly.

The White Rabbit called it back in 1951: flying is (and probably always will be) a touchy subject in WoW. But this post isn’t about flying, thank goodness. Let’s answer some questions instead.

Any class/spec you absolutely will not play under any circumstances?

Liz: Tank. Though I frequently main a healer, which sounds like a crucial role (and it is!), I just can’t handle the responsibility of tanking. You have to lead the group, know exactly which pulls to make (and how to make them), and know every strategy for every boss to keep the group alive. I couldn’t handle the pressure!

Mitch: Not really. Mostly, it’s just that I have a few specs I really like and just stick to them. There are a lot of specs I haven’t played, but it’s not really a matter of refusal. I’d say the closest thing is that if I’m playing a tank or healer, it has to be a specific class (e.g., I will tank on my Warrior but I’ve never tried on my Monk). I’m pickier about tank and healing specs than I am about DPS specs. And yeah, I think tanking is the most daunting, to be honest. It can be a lot of fun if you find the right spec for you, but it’s still intimidating.

Liz: As a healer it feels like you have less to keep track of than tanks or DPS. You have to know the basics of a fight to know when to get out of fire (etc), but you’re mostly watching health bars, triaging who needs healing most, and picking the right buttons to press at the right times. It really suits my complete lack of situational awareness.

Which invasion ending quest/scenario is the worst? I think it’s a tie between Val’sharah and Azsuna.

Mitch: Ironically, I was thinking of this the other day as a Breakfast Topic… but I haven’t really done them enough to judge, to be honest. I think Stormheim’s is relatively boring after the first time or two because it’s basically hitting a button while a drake flies you places and then it ends with Odyn stealing the show, so… I guess I dislike Stormheim’s.

Liz: Odyn is the literal worst.

Mitch: You know, I’m not sure I’ve actually done Highmountain’s..

Liz: I just don’t enjoy random groups very much. All it takes is one annoying player — whether they’re not playing well or just being a jerk to the rest of the group — to make a straightforward scenario or dungeon an utter misery. So… it’s more who you’re playing with than the scenario itself sometimes.

Mitch: I haven’t really had an issue with random folks in the few I’ve done. But unless someone is screwing up so badly that it wipes all of us multiple times, I’m mostly content as long as we finish it.

Liz: Your Priest is probably geared enough to carry terrible players so NBD!

Mitch: Funny story: My Priest is now lower ilvl than my Mage, and my Rogue is only like 10 behind my Priest, lol. But also yes.

Liz: Your Mage has the benefit of being an adorable Gnome, which adds the equivalent of about 20 ilevels.

Q4tQ: do you consider yourself prepared for Tomb of Sargeras?

Mitch: Itching for it, to be honest. The Broken Shore hasn’t really, uh… how can I put this nicely? It hasn’t been great. It’s not the amount of story or variety of activities that I expect from a major patch. Especially when you compare it to getting Karazhan and the Suramar finale. Prepared or not, I’m ready for a new raid.

Liz: I’m definitely not prepared. I took a lonnnnnggg WoW break when I had surgery recently, and I’m probably going to be playing mega casually until all of my medical crap is resolved. TLDR, I guess Illidan was right about me. Sigh.

Mitch: IMMORTAL DEMON SOULS have a way of knowing these things.

Liz: Except at the Black Temple. He called that one way wrong.

Q4tLizQ: Is there a gnome outside of Gelbin and Chromie that you would like to have brought into more of an important role in WoW? If so, who?

Mitch: You didn’t ask me — scoffs — but I’d love to see more of Linken. Not necessarily in a main role, but his Vanilla quest line is one of those things that really sticks with me after all these years, and I miss the little guy. I kinda just want to see that Blizzard hasn’t forgotten about him. (Yes, I know he pops up in the Mount Hyjal area as a random protector person, but still. At least more of that kinda thing.)

Liz: The problem with Gnome characters is that there are so few of them it’s hard to say who you want to see more of. We’ve seen so little of everyone that who knows which one is going to be interesting to see with their own storyline? (Though, okay, I definitely wouldn’t object to more Linken.)

Mitch: Yeah, ngl, I had to look up Gnomes to figure out which ones I was forgetting about.

Liz: Who’s the one in Highmountain learning to hunt? It would be fun to watch her grow into her role as a big game hunter.

Liz: Also I totally relate to her. A writer learning to hold her own against the wild. That’s basically the story of me playing video games.

Liz: Blizzard made a start by giving Gelbin a role in the Broken Shore invasion, but it’s kind of been dropped. Start there, work out. Or just make the next expansion about retaking Gnomergan. With Addie leading the charge.

Liz: This is kind of like a Two Bosses Enter but with only one boss. In which case Sylvanas wins!

Mitch: Did you ever hear the tragedy of Sylvanas the Banshee Queen? I thought not. It’s not a story the Alliance would tell you. It’s a Forsaken legend. Sylvanas was a Ranger-General of Silvermoon, so powerful and so wise she could use the Sunwell to influence the Titans to create life… She had such a knowledge of the Sunwell that she could even keep the ones she cared about from undeath. The Sunwell is a pathway to many abilities some consider to be unnatural. She became so powerful… the only thing she was afraid of was losing her power, which eventually, of course, she did during the invasion of the Scourge. Unfortunately, Arthas unwittingly taught her everything he knew, by keeping her around in undeath as a banshee. Ironic. She could save others from undeath, but not herself.

Liz: Dang, Mitch’s answer is way better than mine.

Mitch: I gets the memes.

Liz: And that’s all for today’s Queue, folks. Tomorrow we’ll revert to the regular schedule with Mr. Matthew Rossi answering your questions. However, starting on the first of the month we’re shuffling up our Queue writing rotation, which we’ll talk about later this week.