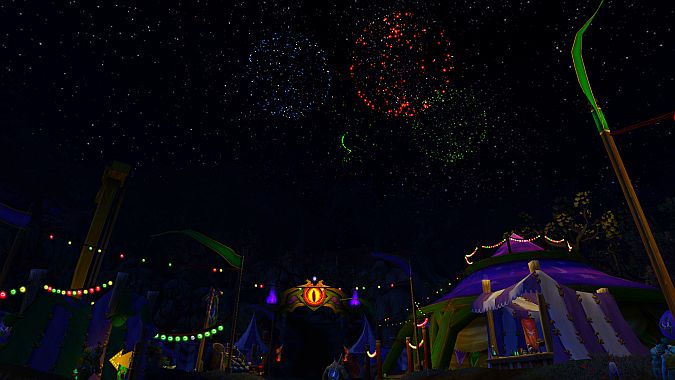 Today is the Fourth of July, which means most people will be spending the day relaxing and the night reveling. For me, this holiday has always felt a lot like New Year’s Eve — not only is it almost at the exact opposite end of the calendar, but it’s also largely a lot of build-up to a nighttime showing of lights and noise.

I definitely prefer it over New Year’s, but it’s still one of those holidays that, as a kid, I used to look forward to greatly because it meant staying up late and playing with explosives. At some point, it went from something I was excited about to something I remembered being excited about, which means it’s hard to ever live up to what I remember it feeling like.

But y’know what? I’m still going to make things explode and have fun doing so. I hope all you Stateside folks do the same!

Wait- so which queue writer gets a day off tomorrow?

No one! I like writing The Queue and I have 6 days of the week off from it as it is. I wouldn’t expect a whole lot on the site today after this goes live, but there aren’t many things that would keep me from giving y’all Tuesdays With Mitch.

So who is grilling what today/tomorrow? (if not grilling, going out/having food cooked for you?) Spare no dirty details. (also, thank/hug a vet (military or animal)).

My family has never really done the whole “spend the day in the sun grilling and drinking beer” thing — our usual ritual is to wait until it’s dark, then light off a box of those fireworks you find at Costco and Meijer and the like. I’ll usually grab a beer or wine as we do so, but it sort of just depends.

(Sorry, I know that’s a pretty boring answer, but Halloween has always been the big holiday in my family.)

Oh, and /hug, /thank, and /salute to the appropriate parties!

what are your thoughts about 20+ guilds being stuck at Mythic Avatar? I like that there’s a lot more competition going on right now, but I hope it’s not a repeat of EN with Cenarius and Xavius.

I’m not sure there’s a perfect route to take with road blocks in raids, but without knowing how tough Mythic Kil’jaeden will be, it’s hard to give a great answer. I like that Avatar is as tough as he is — he should be! But if KJ ends up being a pushover like Xavius was (compared to Cenarius), I’ll be disappointed.

I do wish that some of the other wing-end bosses had been a bit tougher. Nighthold was atrocious in terms of difficulty levels increasing astronomically, but I think there’s a middle-ground Blizz can hit where wing-end bosses are a road block without feeling impossible. Maybe the Burning Throne will have a nice medium in between Nighthold and Tomb’s difficulties.

When you’re heading to Netherlight Temple, do you fly into the building with the portal via the door or the upper window?

I haven’t done this in a while, but I think I would actually fly up into the air, dive-bomb down into the portal area, then make a quick turn toward the Netherlight Temple portal… which I think doesn’t fall under either category you listed :P 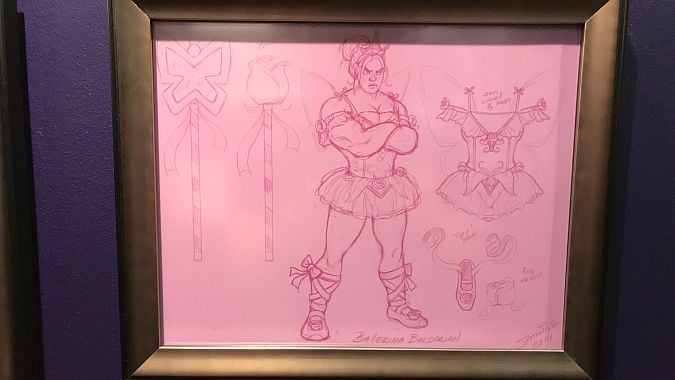 If you could design a skin for any HoTS hero, who would you choose and what would it be?

Okay, I’m gonna give four answers here because one of them is a bit of a cheat answer. The first is a “Ballerina Barbarian” skin for Sonya, which I doubt I’d ever have thought of on my own, but I saw the above concept art for at Blizzard HQ and instantly loved it.

{PB} The second, which…Okay, I’m actually having a really hard time with this. The one thing I have been able to come up with is a Boo (from the Mario games) skin for Probius. Does it break copyright? Sure. But for the purposes of this answer, I don’t care! Alternatively — and less “out there” — I think it would be cool to add gender-swapped skins for the Diablo heroes, since, seriously, they can be male or female in Diablo.

The final answer, which I also can’t take credit for, is a Sha skin for Ragnaros. His skins are all basically the same color scheme and don’t really take Ragnaros to the truly Heroes-level craziness that several heroes do reach. (By the way, I think this was Marie Butz’s idea — please confirm or deny so I can give proper credit!)

QftQ: So … what’s your best pick-up line for a naga?

(I think we should get used to it, as we’ll return to an Azeroth after our Argus Adventure where Queen Azshara is the ruler.)

I admit, I had one immediately pop to mind that is not site-appropriate (but it involves an Azshara-ish sort-of homophone). Actually, the second one that came to mind is also not appropriate.

Ummm…Yeah, all I can think of are lines that would get me in trouble. I’m leaving this here so you all can sound off with come lines of your own.

QftQ: Why are there all kinds of fireworks going on at the Darkmoon Faire? Is it Blizzard’s way to celebrate Independence Day weekend or something or just the arrival of a new band? Or is it some sinister, nefarious plan by the Old Gods to get innocent people to let their guard down even more?

Bonus question: What kind of holiday would shadow priests have and how would they celebrate it?

CITIZENS OF THE DARKMOON FAIRE! RAISE YOUR EYES TO THE SKIES AND OBSERVE THE FIREWORKS DISPLAY! PAY NO MIND TO ANYTHING BUT THE COLORFUL DISPLAY ABOVE YOU!

…Ahem. So yeah, maybe it’s just an elaborate prank by Rhonin to make you raise your eyes to the sky and observe something. Poor guy probably doesn’t get a whole lot of that, what with people hating him yelling it all the time. Also with being dead. That’s put a damper on things for him, too.

Bonus question: If Blizzard’s the one implementing the holiday, it would likely involve visiting a church, praying to the Light, and coming together to fight off the Void that surprise-attacks the church every year. (Of course, the reality is that the Void just wants to be included, but no one remembers it has a legitimate place in the Priesthood. [What? Me? Salty? Why would you say that?])

Thoughts on them removing mounts as rep rewards and making them rng grind from the various factions?

I dislike the Paragon chests, mostly because I like collecting mounts and it feels like a crummy design that you need to hit exalted and then grind more reputation for a chance at the mount. It doesn’t feel like I’m being rewarded for hitting Exalted, which is how it used to feel.

That being said, I think variety is never a bad thing. I don’t want every mount to be RNG-based, but I also don’t want every mount to be a reputation grind. The variety we have now is nice overall, and I think in the future, I would just make it so there 1) aren’t as many Paragon mounts to get and 2) the mounts could drop from any Paragon cache, not just a faction-specific one.

Concerning Warcraft as a setting and with recent developments such as Argus now being in our skyline. Do you think that Warcraft is starting to become too much of a science fiction setting. We used to have Starcraft as a setting for Sci-fi while Warcraft was almost strictly high fantasy with some minor science fiction elements such as the orcs being aliens. I can’t help but feel that it might start to dilute the fantasy of wow even as it opens up so many doors for us to travel to different worlds. Particularly due to the fact that in 7.3 we are using space ships of our own rather than magical portals or things of a similar kin which has been the paradigm for years now.

I’m not disagreeing with your assessment of the Warcraft universe as veering into Sci-Fi elements more lately, but I just don’t think it’s a huge problem. For one, we’re still heroes fighting evil with shields, swords, and spells — our Hunters aren’t using laser guns, and we’re not engaging in massive space-fleet combat.

And even if we do start doing that, I think some of Blizzard’s best work comes from when they can go crazy with the setting. Floating rocks, giant glowing mushrooms, a zone that is eternally night — all of these exist because Blizzard wasn’t limited with their imagination. As I said above, variety is good. I don’t want exclusively Sci-Fi elements nor do I want exclusively high-fantasy elements — but I don’t think we’re becoming too much of either, and the prospect of Blizzard letting loose with their creative designs excites me more than anything else.

That’s all for today — like I said, we might be a bit light on content today, but that just gives you more times to celebrate the holiday and/or leave more questions in the comments. I hope you all have a fantastic day!

Blizzard Watch is made possible by people like you.
Please consider supporting our Patreon!
Filed Under: Darkmoon-faire, Fourth Of July, Q&a, The Quque
Advertisement