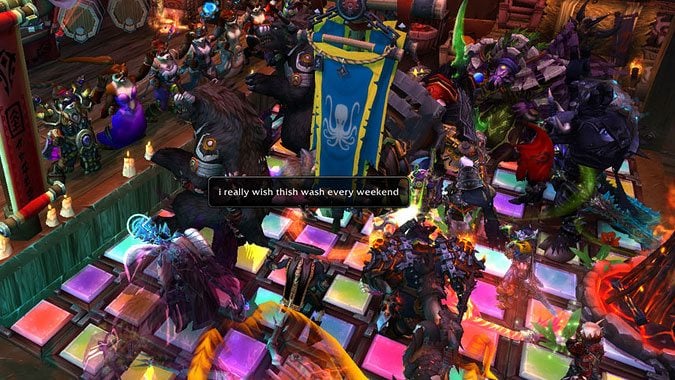 I don’t know who exactly piped up at Blizzard and said “Hey, you know what we need? A disco, right smack in the middle of the Auction House,” but they deserve a raise. Or cookies. Or something along those lines, because this was without a doubt the best mini-holiday in game so far. The place was packed all day long, the Karazhan-disco fusion music was amazing, and everyone was thrilled to be there. I don’t know about every weekend, but I wish this were a monthly event, like the Darkmoon Faire. It was nice to just ditch all Legion-defeating responsibility and go hang out and dance for a while.

Q4tQ: does Illidan have any children that we know of? I was running back through the Bordello Wing of BT the other day and it struck me that there should be a passel of knee-high Stormrages running around.

Not that we know of. It’s entirely possible the Wing of Ill Repute wasn’t actually intended for Illidan at all. The place was overrun by shivarra and succubi — it may be that the mortals were there specifically to cater to the demonic inhabitants. As for Illidan, he pretty much lost all focus on mundane things once he began his obsession with tearing down the Burning Legion. Starting a family wasn’t exactly on his to-do list at that point.

Casual player here, why is a random world boss rotation bad? By casual I mean I’m doing the alts now, and my main is hanging out getting Dreamweaver rep as needed to get the Unicorn (Not unicorn)

Mostly it’s because certain world bosses held hidden Artifact appearances for certain classes. That has been adjusted, and those items are available elsewhere, so that annoyance has been alleviated. But there’s also the fact that each boss has its own distinct loot table. I know on my alts, I try to hit the world bosses every week to get some better gear. If I have all the loot off of one boss, and that boss keeps respawning week after week, that does me little good. Meanwhile, there’s better gear on a different world boss that never shows up. It’s pretty frustrating!

Q4tQ: Should the price of flying be lowered in older content? That is, Artisan and Master Riding skill still cost 5000g (and Wisdom of the 4 Winds at 2500g).

For some alts, this isn’t that much concern. But for new mains actually leveling through, or casual players who don’t stock up on gold it can be a very costly expense. Especially compared to the 250g needed to fly on the two main continents, or the 500g to fly in Northrend.

So should Blizzard go in and take a “0” off the cost of Artisan, Master, and Wof4W to put it more on par, especially since going forward it appears all flying will be Achievement-based?

On the one hand, flight is one of those things that probably should be expensive — it gives your character a distinct advantage. And it’s not that hard to make gold at max level, right? So why not just leave it as is, keep it as a valuable reward and a bit of a gold sink on the side? {PB}

Well here’s the problem — these days, you level so quickly that you don’t really make a lot of gold unless you spend a lot of time focused on that. Which means by the time you blaze your way to 110, you’re lucky if you have enough gold to get by. Sure, gold is readily available — if you want to take a diversion from the speedy leveling and go get it. And when you hit max level, you’re grounded anyway, in the current run of expansions.

So I kind of have to agree with you there. I don’t think, at this point in the game, that there’s any point in charging so much gold. By the time you have enough gold to purchase the flying, you’re usually in an area where you can’t fly until you complete a lot of achievements. The lower cost would allow players to purchase flying when it’s actually useful to their characters. I don’t know if Blizzard will ever do it, but I don’t see anything wrong with the idea at all.

Q4tQ: what are some good ways for engineers to make gold? I’m trying to make a Geosynchronous World Spinner and I need 60,000g for the three Orbs of Mystery.
Or should I just have one of my farmers round up the gold?

Use your farmers, sell herbs and ore. Honestly, Engineering is a lot of fun, but it’s not really the kind of profession that’s ever going to make you a lot of gold. Every now and again I’ll put some engineering-crafted pets on the AH, but even pets don’t really rake in the gold these days. It’s more of a profession meant for the enjoyment of the player, rather than providing another source of income.

Why did Darion Mograine bother to take on the Ebon Watcher disguise when he was at the Argent Vanguard with Tirion Fordring? He abandoned it almost immediately afterwards.

Because at that point in time, only Death Knight players knew that Darion was head of the Ebon Blade — it was pretty much a surprise for everyone else, or at least it was intended to be. Lore-wise, Darion was very much on the outs with the Lich King, so just striding right into Icecrown, heart of Scourge territory, wasn’t exactly a good idea. Once Scourgeholme was cleared out and a base of operations had been established, it was presumably a little safer to show his face.