I’m still having a lot of fun on my WoW vacation playing Diablo 3. I know as soon as 7.3 drops I’m back to Azeroth, if only to immediately go to Argus, but until them I’m excitedly killing stuff with a big honking weapon and a lot of twirling.

A lot of people tell me that Barb is the weakest class in Diablo 3, and for all I know it may be true. It’s certainly disheartening to see so much talk about it. But with the complete Wrath of the Wastes set, my WW hits for 800% damage and I have enough Life on Hit and Life per Fury Spent to basically twirl my way through just about anything. I don’t have either the Istvan or Bul-Kathos swords yet, but in the meantime my Ancient Legendary is doing pretty solid damage and when I need to generate Fury (which isn’t often because my WW generates Fury for every target it hits) I have Frenzy with the legendary power of activating every single Frenzy rune at once, so yeah, I’m having a ball.

Frankly, I feel like I’m going to be sad when I have to go back to my Warrior after playing this ballerina of death.

Do you think Blizzard is trying to “conclude” the Azeroth story lines in preparation for sending us to other planets in future x-pacs?

I wish, but I expect we’ll be back on Azeroth after 7.3 — we still have plenty of problems to deal with like the Scourge, the Old Gods, Azshara and unrelated threats. There’s still the Void Lords out there, and perhaps other threats we’ve never even heard of. I expect Legion mostly serves to close the book on the Legion for a while (until Blizzard decides they need to come roaring back, but I don’t expect that for a while) so we can focus on other stuff.

But don’t be fooled. This isn’t the end of the Legion. The second Blizz decides they want them to come back, they’ll find a way to do it.

Now, I’d love it if we went to alien worlds that were completely different, had absolutely nothing to do with the Titans, the Legion, the Old Gods or the Void Lords and ran into things utterly unlike anything we’ve seen before. But I don’t expect it.

You recieve a Godmode Item in the mail. Use it to kill any mob, from a lowly kobold to Mythic Kil’Jaeden. Once you’ve used it, all characters on your account except the one who used the item will be deleted.

Would you do it?

So, one of the missteps of Warlords was to present the Iron Horde as an imminent threat to Azeroth, only to have us tear through it like a buzzsaw through crepe paper.

In my experience, they managed to avoid that in Legion. What specifics do you see in the story beats, levelling stories and continuing content contrasted with the levelling in WoD (which is pretty much where most of the story happened) that you think accounts for the increased sense of challenge in the Legion over the Iron Horde?

While the initial setback at the Broken Shore accounts for some of it, I think there are other aspects that helped us feel that the Legion isn’t as negligible as the iHorde, but I can’t quite put my finger on other specific aspects.

For starters, they didn’t present us with a group of iconic figures and then let us wipe most of them out before the end of the first patch. Seriously, putting Bladefist in the very first fight of the very first raid, Ner’zhul in a 5 man, Asoka in a campaign quest and Blackhand at the end of the second raid meant that before 6.2 even dropped the Iron Horde had lost most of its big guns and Garrosh, who died during the leveling process.

By comparison, this time around we didn’t get to kill Gul’dan until we’d leveled to max, done Emerald Nightmare and Trial of Valor and all of Nighthold, and that was barely even us squeaking by. 7.2, we had a grueling series of weeks just to unlock the Tomb of Sargeras and fight our way through it to get to Kil’jaeden, and we’re going to have an even tougher slog on our way through what Argus has to offer. That’s part of it.

But the truth is, no matter how many Orcs they threw at us, we always knew there would be an end. There weren’t infinite Orcs. But with the Legion, we know that killing a demon outside of the Twisting Nether is, at best, a setback. We can win and win and win, but if we don’t kill them in the Nether (or in a place suffused with the Nether’s energies) then we’re just delaying them. So even victory over the Legion often feels like a holding action. It certainly looks like Archimonde and Kil’jaeden are dead for good this time, but we can’t be sure they are — Blizzard could always come back later with ‘Oh, Archimonde died on Draenor sending Gul’dan through, and Kil’jaeden died high enough above Argus that it didn’t count’ and bring one or both of them back if they wanted to.

The Legion is a whole different order of threat. The Iron Horde didn’t even conquer their own planet, but the Legion has destroyed whole worlds already. They’ve invaded Azeroth before and it’s never been easy to stop them — the last time we blew up the World Tree, and the time before that we blew up Kalimdor. So I feel like they have more of a rep to start with.

Based on all the Diablo 3 I’ve been playing and loving lately, you’d think I’d be all over this. But I’m not, because I’m not at all sure that WoW can handle the kind of system that makes Diablo 3 talents work.

Looking at Diablo sets and how they interact with abilities what you end up with is one or two buttons you use 90% of the time, then four abilities you use for specific circumstances — maybe a fast movement or get out of trouble button, a DPS cooldown of some kind, a general ’emergency attack’ that heals or otherwise lets you do something when your resources are low, and a big AoE. Sets often buff one of the options to ludicrous levels (like the Bul-Kathos weapons and the Wastes armor set buff Whirlwind until it’s ridiculous) and that’s fine, D3 has systems in place to absorb that kind of thing. You’re going to change what abilities you get and use based on your gear and what legendary powers you applied to yourself using Kanai’s Cube, and that’s fine.

WoW doesn’t have that kind of robustness when it comes to OP abilities like that. There’s not going to be nearly as much gear flowing into player hands, and if one class is demonstrably OP (much less one talent or ability of one class) it has more of a negative effect than it would in Diablo. If my Rend build isn’t working anymore (as it wasn’t) I could run until I had the gear to switch to a WW build. But if I’m Arms and Arms just stinks, after a certain point (even with gear being a lot more flexible than it was before) I’m just boned. A big part of this is that WoW is a group content game, while Diablo 3 is a game where you can access anything solo, more or less.

I mean, don’t misunderstand, I freaking love feeling like I can just become a woodchipper and turn demons to mulch on my Barb. But I do worry about whether or not this would work in WoW, which has already borrowed a lot from D3 this expansion. If they went this route, that’s pretty much the end of specs, I think. Maybe that would be just as well, I can’t pretend I know. I just don’t think it would fit well.

QFTQ: Which of the class hall campaigns have story relevant to the expansion? I’m starting to level up some of my alts and starting the Demon Hunter story find that it might explain some of Illidans stuff. So I was wondering which other classes have pertinent stories? Have done Druid (which has more info on the Emerald Dream story), Mage (meh), Hunter (meh) and Monk (Monk stuff).
PS. Not saying Mage, Hunter and Monk are good or bad, but that they don’t have much to do with the core Legion story.

Of the ones I’ve done or watched videos for, both Priest and Paladin are pretty darn significant for Legion (especially once 7.3 drops) and DK are to a slightly lesser extent (it almost feels to me like DK are even more significant to whatever comes after this expansion.) Hunter and Warrior definitely feel like they’re tangential at best. Shaman actually feels pretty involved, all things considered. That’s just my take on it, I haven’t done all classes. 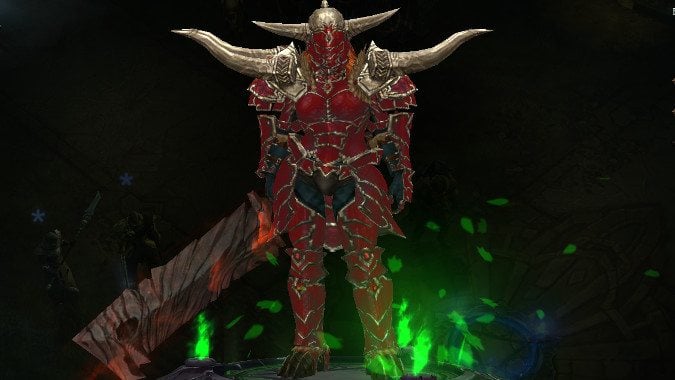 I really enjoy playing her.

Blizzard Watch is made possible by people like you.
Please consider supporting our Patreon!
Filed Under: Argus, Azeroth, Diablo In WoW
Advertisement