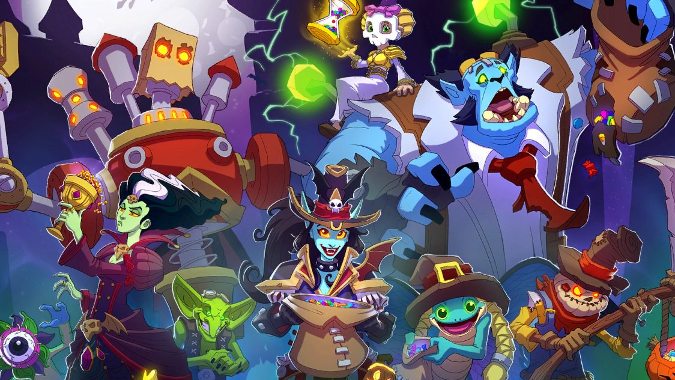 Beyond Hallow’s End, the patch notes include reworks to Zul’jin and Muradin and honestly, a truly staggering number of nerfs across the board. Malthael’s trait deals less damage, Abathur’s Ultimate Evolution has a longer cooldown, Zagara and Morales have less health, Stukov’s damage potential has been reduced, and so on. On the bright side, some of the damage done to Johanna’s survivability in her recent rework has been addressed, and D.Va has received some positive tuning, too. Lunara’s Wisp has also received a buff!

The destruction of the Australian omnium left the area an irradiated waste and survivors like Jamison Fawkes were greatly affected by radiation. Now as the explosive-obsessed criminal Junkrat, he is renowned for leaving havoc and bedlam in his wake.

Developer Comment: We want to shift more of Nazeebo’s Health into the amount of Voodoo Ritual stacks he has, as the reward for Voodoo Ritual was mostly felt in unlocking Vile Infection at level 20. We’re changing Spider Colony to no longer reduce the cooldown of Corpse Spiders, because the synergy between the Spider Talents were so high that if you picked any one of them the rest of your Talent choices were locked in. Since we are changing the level 16 Talent to now affect Plague of Toads instead of Corpse Spiders, we’re shifting some of the damage out of Plague of Toads into Corpse Spiders. For Superstition, we wanted to get most of the spirit of what the old Talent did, but have more gameplay interactions. Often the only counter play to Superstition lied in what the enemy team composition was, and we’d rather have more counter play relying in decisions made during the course of the game.

Developer Comment: Ana has had an incredibly successful launch into the Nexus, and seems to be falling into a great place balance-wise. We are still light on high-level data for her, so our changes this patch are very light. We realize that she has some synergy concerns and wanted to get a small jump on the largest catalyst to those – Overdose. While playing her internally before launch, we knew she had the potential to single-handedly shift the meta, not to mention increase the amount of double-support we see. Rest assured that we are keeping a close eye on both of these concerns and are prepared to act accordingly if the need arises.

Note: Seasonal Items from previous Hallow’s End events have also been temporarily re-added to the game. You can find more information in our Hallow’s End blog.

Blizzard Watch is made possible by people like you.
Please consider supporting our Patreon!
Filed Under: Hallows End, Junkrat, Patch Notes, Ptr
Advertisement