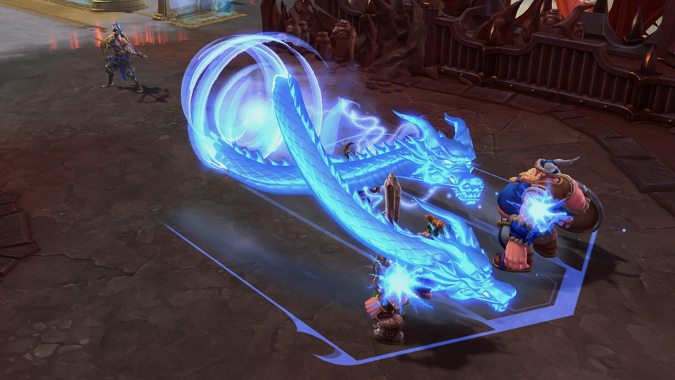 Hanzo of Overwatch will be the next character to enter the Nexus in Heroes of the Storm, and he might be one of the least-exciting releases in recent memory. I’m sure there are individuals who are super stoked about it, but in general the hype is pretty low. This afternoon, Blizzard released Hanzo’s hero spotlight, and it’s unlikely to change any minds.

Hanzo appears to be as straightforward as it gets — he’s a skillshot-based assassin. Yes, there are some complexities at play: his scatter shot requires you to be aware of your angle of fire. Trying to aim skillshots on the move will take some learning. But generally speaking, this isn’t a particularly flashy hero release. If you know Hanzo from Overwatch, or you’re at all familiar with the concept of an archer, there are no big surprises in store.

That isn’t necessarily a bad thing, of course. Not every character needs to be a total game-changer. Sometimes you need those characters who exist simply to deal damage. If Valla were added to Heroes of the Storm right now, she probably wouldn’t be thrilling, either. Valla’s still a great character to have as an available option to play.

More interesting than Hanzo himself are some of the UI and gameplay changes that come with him. For example, while playing Hanzo, you always see exact outlines around the terrain so you can correctly angle his Scatter Arrow. Junkrat also uses a ricochet mechanic with his grenades. An issue players often encountered was the inability to accurately predict how his grenades would bounce. If Junkrat will now be able to see terrain outlines like Hanzo does, it means you can aim his grenades more accurately, with no nasty surprise angles.

Of course, those outlines also make the maps look rather ugly — like looking at the map in a level editor during development rather than the polished, finished product. What’s functional doesn’t always agree with what’s aesthetically pleasing, and those two things are definitely at odds here.

Blizzard Watch is made possible by people like you.
Please consider supporting our Patreon!
Filed Under: Hanzo, Hero Spotlight
Advertisement